Apple Moving Away from Qualcomm Modems is Old News 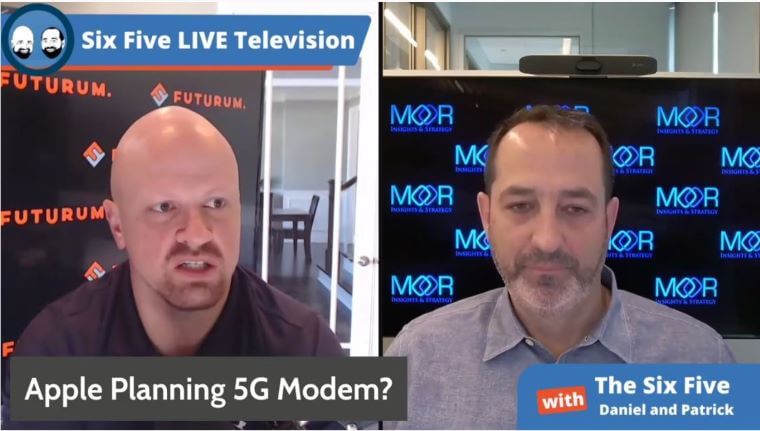 The Six Five team discusses Apple moving away from Qualcomm modems and how this is recycled news from 2019.

Patrick Moorhead: Apple takes its 5G modem building in-house. Gosh, what a surprise. We never heard this before, have we Daniel?

Daniel Newman: Yeah. This is one of those topic I couldn’t wait to talk about. It was a total nothing burger, but it warrants discussion. So a lot of people realize that in 2019, Apple and Qualcomm reached a settlement after a long feud, that was both a direct feud that existed between the two companies, and also, a sort of Apple-led view that drove the FTC to try to essentially break up Qualcomm’s licensing business model to make it, let’s just say less successful, to kind of weaken the innovation ecosystem of our national connectivity technology business.

And so the other day, once again, I think the analysts, he’s an Apple insider article decided, TF International Security analyst, Ming-Chi Kuo. And if I said the name wrong, I apologize. But they cited him. And he’s kind of been known as a rumor breaker. He has done this in the past. Came out with a story and said the company is moving away from Qualcomm. We heard a similar story, by the way, a few years ago about Intel and it did happen.

My take, Pat, this is a competitive move that is being done to push negotiation between the two companies, because right now Apple needs Qualcomm very much for its iPhones, which by the way grew astronomically in the last quarter. And in order to offer a 5G iPhone, Qualcomm is the epicenter of the Apple product. But there is ongoing negotiations that the contract, I believe it was five or six years in 2019. And I’m sure Apple would like to get a better deal for continuing to use Qualcomm through the process. A part of this, I think, is a negotiating tactic.

The second thing though is, is everybody gets all freaked out about this, is taking a little bit of a look at the business model and what Apple represents for Qualcomm. So while we don’t have the numbers. JP Morgan has put out what they speculatively say are the numbers. And they believe it’s something around as much as almost 20% of all of Qualcomm’s revenue comes from Apple. That’s on the high side, but that is the number. That’s 14% from the QCT business, 5% from the QTL business. That’s the chip side versus the licensing side.

But there’s a couple of things no one’s talking about. One is Qualcomm is building a series of new multi-billion dollar a quarter business that are part of their QCT. That’s RF front end, that’s IOT, that’s automotive. Those were not historically nearly as large. Now they represent one third of the business. So within two years, or as I’m suggesting, maybe as many as four to five years, that will not be even close to 14% of the business. The second thing is most people don’t understand, and by the way I’m totally getting you back on this one. I’m leaving you nothing-

Patrick Moorhead: I know, I am, but- Our script is ticking away here.

Daniel Newman: It’s the QTL revenue. I’m going to make this part a little simpler, but Qualcomm makes money when any device maker sells a device with 5G in it. And so people look at it like, “Oh, Apple is moving away.” Look, Apple can build its own 5G modem. It’s still going to have a licensing agreement that will be held by its contract manufacturers overseas that will have to pay a royalty to Qualcomm on every 5G device it builds, even if it builds its own modem.

And I think the last thing is, I think is just the overall complexity and time. When I say it’s going to take time, here’s why it’s going to take time. In order to actually use a 5G modem in another market… Remember, in the US, you got the FCC. There is an equivalent of the FCC in every country in the world. So if Apple wants to sell its phones, it’s going to be needing to get government regulator equivalent approval from the FCC. And also by the way, you need operator approval and assurance and quality and testing within the entire ecosystem.

So overall, long and short, Pat… and by the way, I had more, but I’m going to stop here… this deal will happen, but it’s going to be like ’25, ’26 before I think Apple can do its own modem. And then it has to actually put it in a system, which by the way, isn’t a single step process.

Patrick Moorhead: Wow. Got a whole lot of oxygen-

Patrick Moorhead: … preach out. So one, a few adders there. So first off, also is what will that 5G modem go into? Will it actually go into the iPhone, which is monumentally more complex and a smaller device, because you have voice on it and it is more complex, or will it go into iPad and Mac, which are substantially almost 10x smaller businesses than the iPhone?

And the other element here is, is its lead lag. I would still expect Apple to lead. Let’s say we go to the next generation of 5G or, God forbid, I use the word 6G here. What are they going to do? Take a pass for a couple of years? Maybe. I mean, Apple was laggard with 5G in iPhone and it didn’t seem to hurt them much. I think they were a full year and a half after Samsung led the market there. So that’s all I got. That’s all I got here.

Daniel Newman: Hey, man. Now we’re even, so let’s split the rest of the way. I’m just kidding. You know what though, sometimes you and I could catch fire. You wrote an amazing Forbes piece on that Lattice Semiconductor. And you know what, there was a lot to cover. And I think you did a great job. So everybody out there, don’t hold it. Between the two of us, we get there. And that’s why we do it this way. Sometimes, it’s more Pat. Sometimes, it’s more Dan, but it’s always going to be the analysis that you should be looking for.

Patrick Moorhead: Yeah. And by the way, in complete transparency, Daniel and I do pick kind of lead lag topics. So yeah, it’s not a secret here. Otherwise, I think this would be an hour and a half long. So speaking of that, let’s dive into the next one.