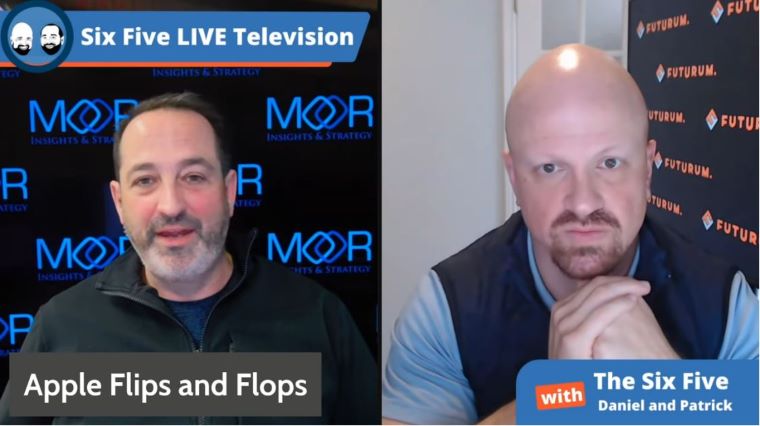 The Six Five team dives into the latest from Apple.

Patrick Moorhead: Yeah, let’s do this. Interesting thing, Apple’s just been on an absolute tear from a valuation standpoint, the M1 and all its family members for chips have been looking pretty good. Not as dominant as Apple says, but I thought what was interesting, two journalists who I respect a lot, Joanna Stern and Nilay Patel, who was talking about an article that Chaim Gartenberg wrote about some Apple stuff and Daniel, when is the last time you heard something like this? And let me quote Joanna Stern, even better yet, let me put her article up here so we can both look at it. Her tweet, “I wanted to love you Apple Studio, I really did, but your webcam is bad and your display is no better than some more affordable displays, my review.”

And then Joanna goes through it and essentially talks about how the webcam is bad and the display quality is okay but you can get a much cheaper display and get better performance out of it. She did talk about how great the audio sounded though, which was great. And then I think this was the same day and here’s what Nilay came out with, “The M1 one ultra is a triumph but Apple’s goofy relative performance charts set it up for a needless 3090 comparison that wasn’t borne out in any of our testing.” And here is Chaim Gartenberg’s in the case of the wacky charts where power just ends at about a 150 Watts. And by the way, that’s a 3090 on the right hand side. And then looking at all the performance that came out, basically the 3090 from Nvidia ran circles around Apple’s M1 Ultra, and then which I love the best. This is what the curve should look like for Apple.

And then you’ve got Tae Kim from Bloomberg who comes in and says, “Hey, let’s look at gameplay that the Mac Studio stinks at.” Let’s look at Cinebench, gosh, versus the latest from Intel. It doesn’t even win on Cinebench. And then of course, Blender, where with the help from the Nvidia 3090, just completely runs up the scores. And then Daniel, I had to get in on here basically saying that the M1 Ultra can’t run half of the Steam games out there. This is the kind of the incriminating evidence, but I kind of wanted to bring up this thought that why all this? I don’t know, is it that Apple’s products aren’t as good as they should be? Or is that Apple’s marketing and their claims are just getting over their skis and Apple is in one of these, I am cocky modes?

The other thought that I had was, gosh, I’ve looked at Apple’s performance claims and their chips over the last decade, and listen, you have to give them credit for what they’ve been able to do. I am unaware of any vertical play that’s ever been able to do this since, I would say Sony in the early 90s, to be able to do semiconductors well and do end consumer products well. But on the other side of my mouth, I’m going to say they have twisted the truth. They don’t show evidence for their claims or they wait for three or four days later to post on their site. And I just don’t know what’s going on in Apple or if these even matters at all, because people love Apple and they trust Apple and Apple can say pretty much whatever Apple wants to say and people will buy it anyways. What do you think, Daniel?

Daniel Newman: I think you hit it on the head in that very last couple sentences that you said. There are some rules and there are some regulatory stuff by FTC and related to claims made, but Apple and burden of proof is very complicated. They can make a lot of claims. And if someone debunks it, there’s a difference between maybe debunking and arguing with the claim and the actual ability for someone to want to stand up in a court of law or actually have a body like the FTC pursue those claims. Apple is able to draft off of an immense amount of market trust that it has created, that has made it the most valuable company in the world on multiple occasions. And I believe at this moment, as we speak, there’s a reason that despite constantly lagging on features and technologies, whether that was in the Mac or in the smartphone slash mobile device space, that their sales and revenues and margins have always been off the charts.

It goes back a couple years to when we were trying to explain to the market why Apple was abusing its power in what they tried to do with Qualcomm, what we talked about earlier. It also is a reason that Apple store, the most obvious instance of antitrust that I can find in the world is still not being regulated or enforced at any level. I don’t mean to go off the reservation, but you covered the particular instance well. I just love that you said trust because in my opinion, it’s all about the fact that people buy on, they take pictures of the pretty charts. They agree and believe the performance without any third party validation or any legitimate third party skeptic analyzing that data. And like you said, by the time those four or five days later, how many orders are already in for these products before the company’s even required to present evidence?

This by the way, doesn’t negate, I liked liked Nilay’s comments about, these are really good, robust, powerful products, but why lie about it? It’s kind of like, Pat, I go to the gym, I bench press 315 and I want to come home and tell you I did 335. It’s like, why would my instincts do that? 315’s pretty good, you know what I mean? And that seems to be a little bit what’s going on here is, let’s push it to the edge. No one’s going to challenge us. Everybody trusts us. And if they do challenge us, it’s going to take years in court and it’s not worth challenging us for, so eh, off we go, we’ll just fib, we’re not lying.

Patrick Moorhead: Yeah. The irony and my last tweet was about this, is you don’t have to do this Apple. You have on the whole, good products, you have a few stinkers here and there and nobody’s perfect in tech but you don’t have to stretch the truth and stop it. Listen, it’s a slippery slope and I have to tell you, when Apple does decline and there’s never been a company in the history of companies that hasn’t declined. That’s why here history lesson kids are very important, the market is absolutely going to jump on them and it’s going to be a horrific but fun car crash as it happens.

But maybe in the meantime, until that happens, Apple, don’t do that. I know who does the testing over there and I know who does the marketing and I don’t know where this is coming from, but has to come in there. And by the way, our regulators are afraid to regulate Apple because they much rather have our monopolies being bigger than China’s monopolies. We haven’t seen any action on Google. We haven’t seen any action on Apple. My only thought that potentially what kicks this off is in the EU with the iOS App Store.

Patrick Moorhead: No, that’s right. They got to get their pound of meat out of US tech companies, if they’re not going to get taxes. I think you and I both agree on that. At least the Chinese regulators are upfront about it. Literally they’re just like, “Listen, you’re make too much money and you need to write us a check.” I’m not kidding. I’m not even being, this is the way that that happens in China. But I applaud the openness that China at least has, not beating around the bush.

Daniel Newman: They’re like the decentralized web over there, Pat.

Patrick Moorhead: Yeah, exactly. Wow. What a fun way to end the show.