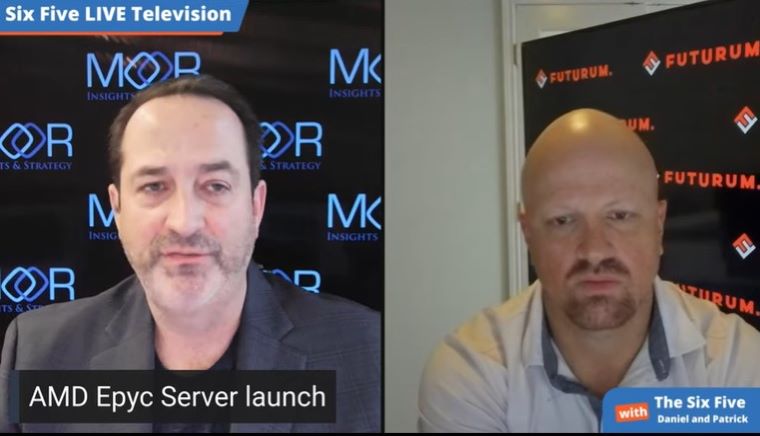 Daniel Newman: Talk about AMD. They had a big launch this week. This probably deserves more time, but we’re going to have to give it a quick hit today.

Patrick Moorhead: Yeah, huge announcements for them. Fourth generation epic AMD is in the 20% range of market share and server. I think for cloud providers they’ll probably end the year at 30%. This company is on an absolute terror and the big question with AMD was how long could they keep this going? We saw this incredible run that the company had with previous server, which was called Opteron and after three generations it just petered out but AMD as strong as ever and quite frankly the numbers that the companies are putting up on a performance basis are actually higher than the previous.

Now the benchmarks out, the comparison to Sapphire Rapids isn’t available, but AMD is saying they have 2P integer throughput on many core, a 3x over Xeon Platinum. And Integer is one of the primary determinants of application performance out there. Number of cores has a lot to do with cloud performance and it’s single core as opposed to multi threaded performance but the company leaned into things like energy savings, which was great to see. We saw this back in 2006 and they’re talking about using 25% of the energy of the other folks. I’m super interested to see Bergamo, which is 4th Gen, Epyc versus Sapphire Rapids from Intel and I’m hopeful we’ll see this in the fourth quarter. The customers that got on stage, Daniel were incredible.

We saw Antonio, we saw Dell’s president, we saw Clay Magouyrk from Oracle Cloud basically get up there that says, “Hey, no longer are my customers saying why AMD? My customers are saying why not AMD.” We saw Kirk from Lenovo get up there and talk about his time to market advantage and all the speed records that he’s breaking. Interestingly enough, Dell talk about all the world records that they’re getting with with AMD and Dell is kind of the last company to lean in into non-Intel parts and we can see if they’ll actually convert that into revenue. Heck, we saw Scott G from Microsoft and Azure, Google Cloud had a quote, CEO of VMware was on stage talking about confidential computing. So all around a big event for AMD. My spidey senses, Daniel, tells me that in 2023, AMD will continue to take share in the server market.

Daniel Newman: I would’ve said that’s a provocative bet, but it does increasingly look that way. I think we are going to see a more fierce competitor in Intel next year with Sapphire Rapids scale and of course the processes that they’re going to be the aggressive timeline if they’re able to execute but these things don’t flip overnight. It was like AMD didn’t start gaining share on the first good products AMD came out with and the first mistakes Intel made and it’s vice versa. With Intel kind of coming out of what I think is probably one of their darkest cycles in terms of issues, they’re going to get things right, but AMD’s built loyalty and they’ve been able to deliver at a level that has created a lot of loyalty and also with Arm and what we’re seeing with AMD customers are, they’re multi-sourcing more. The multi-sourcing movement is increasing and AMD has benefited from that.

So even if Intel gets it all right, you’ve got to figure there’s going to be a cycle before they’re going to really start to get some of the share back that they may have lost. So numbers, we’ll see that ultimately, Pat, that’s the great thing that we get that data every quarter but hey, we’ll talk more about this one. Congratulations to AMD on the launch.