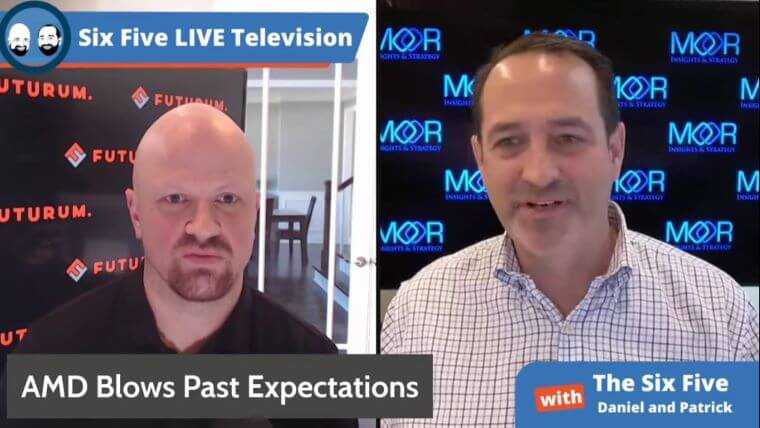 The Six Five team discusses AMD earnings, and how they have been crushing it.

Patrick Moorhead: AMD has pretty much been crushing it for the past two years. They crushed the first quarter. You know, Daniel, not triple digit earnings growth, just a mere 93%, 100% growth in gross margin, a measly 275% gross increase in op inc and net income. They’re killing it. The Computing Group, which is the Client Computing Group, which is essentially a Ryzen and Radeon, up 46%. ASPs were up.

And by the way, in this environment, and this is what shocked me so much about AMD, sorry, Intel’s earnings. Their ASPs were actually down. Processor and graphics ASPs worked up for AMD. EESG, which is a conglomeration of server, semi-custom, which means game consoles, was up 286%. Boy, how I wish they would break out their server numbers, epic. They really need to because every time I see it lumped together, even though they’re saying, “Hey, double digit growth,” I’m thinking, “Okay, what’s the base? Shouldn’t it be triple digit growth like it was two or three quarters ago.” And the market net net, the market rewarded AMD initially. And then, like a lot of tech stocks that we’ve seen, trailed off.

Daniel Newman: Our friend Kramer, actually, came out a bit, outspoken today about his frustration about these blah earnings and sort of the lack of movement. We have entered a parallel universe now where we’re on a full, by the meme, sell the news, buy the rumor, sell the news. People are getting all pumped up. But, it’s becoming a known entity that companies could blow out earnings. You used to think, oh, just wait till earnings. That’s when we’re going to see a big rise because they’re going to have a great quarter and everybody’s going to buy, it’s going to push the stock up. But, what’s happening now is the stock runs up right until earnings. These companies come out with these amazing results, 90 plus percent growth. That’s insane. Although I would say the sequential growth, quarter over quarter, was much smaller.

People aren’t realizing AMD is on a sustained path. They’ve been blowing out last year, but they’re slowly growing on a quarterly basis. But, what else is really happening is nobody’s surprised anymore. Were you surprised yesterday? We’ll talk about Amazon later. Were you surprised when they destroyed the EPS number by 50%? I wasn’t surprised. I was expecting it. I almost feel like I can predict these things accurately now because all you got to say is, “It’s going to be good.” And you’re going to be right.

That’s what Kramer was saying, that he’s frustrated that earnings… We move on tax. Someone makes a comment about a possible increase in our taxes, the stock market goes down 500 points. Somebody mentions that we might reopen or air travel is up, the market goes up 400 points. A company actually does a terrific job, on a quarterly basis, delivering on its promise. And people are like, “Eh, not interested. Going to sell it.” AMD deserves all the credit. Lisa Su has been on a tear. Thrilled that she’s going to be back at our event this year. Can’t wait to talk more about that, publicly soon. But listen, AMD is doing great. The market in semiconductors is very strong. We’ve seen CPUs up 30% plus. Let’s just say, ring the bell AMD. Good job.

Patrick Moorhead: Yeah. Final thing I’ll say is, I do believe that AMD took revenue share in client computing and server. I believe that, on a unit basis, we’ll probably see Intel up in client, but down in server. A good job, AMD.