Amazon Faces Tough Balance of Innovation and Hearing its Critics 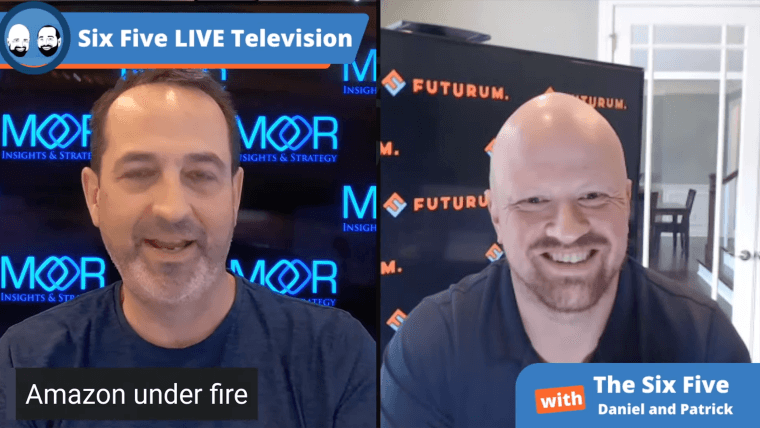 The Six Five team explores what is happening with Amazon right now with quick takes on wages and taxes. Will Amazon ever do enough to satisfy the critics?

Daniel Newman: Let’s move on speaking of regulation, because I’ve got a topic that’s kind of a near and dear to my heart, my mind I’ve been thinking a lot about. And that’s all the stuff going on with Amazon. And Pat, you know, this is a family friendly show, you know, we are tech and so but tech companies, you know, you’ll hear us talking about things like ESG sustainability. And so Amazon is clearly one of the world’s most disruptive companies, whether that’s the cloud business, the device business, you know, home automation, their E-commerce and supply chain that they’ve developed technology rich, and it’s been a success, a path to success. And the company, despite the fact we will often forget, lost money for a long time before it made money and in recent quarters has made a lot of money. And we’ve found that Amazon has kind of ended up in the center of this debate around employee compensation treatment. It’s got a unionization effort right now that’s going on in Alabama. You’ve got regulators pushing for higher tax rates for Amazon or for greater taxes because people learn that what Amazon is or isn’t paying in taxes. And by the way, a lot of people also don’t always understand just a really quick refreshers as a C Corp that means every employee pays taxes. So a lot of companies are S-Corp and LLC and they all have the money that flows through and only the owner and principal pays. We can’t get too deep into that here, Pat, but I feel it’s worth it. Because when you add 400,000 employees, every single one of those employees contributed taxes that were paid through the company’s business.

So when you know it’s a, long story short, we’re in a very interesting moment for tech and innovation right now. We’ve got kind of two sides of the story. You’ve got a company who’s been very successful, who is proactively back I think it was 2018, November of 2018, the company went to $15 minimum wage across the entire organization. You’ve got a company that has spent, I think in 2020, throughout the pandemic, about $18 billion on its marketplace for small businesses to help small businesses grow. You’ve got a company that I think hired more people than any other company on the planet during the COVID pandemic. That took shipping down to the hour so that people can get the stuff they need throughout the pandemic and spent, I believe, over $100 million in its climate pledge, and also has brought hundreds of companies around the world in the push for the Paris Accord. You’ve got a company that’s doing a lot of good things. But you’ve got a market that seems to never feel like it’s doing enough. You’ve got Bernie Sanders, you’ve got Elizabeth Warren, pushing that there should be more tax, that the wages should be higher. And I just think it’s really interesting kind of, you know, and I’ll kind of almost throw it to you, because I want to get your comments on this, too, is when you’re talking about innovation, a company’s number one responsibility is to its shareholders. I know people sometimes get frustrated by this. But that is when you’re a manager. When you go to business school, you learn that we’re entrepreneurs. We know if we aren’t solvent in our businesses we can’t do anything for our communities. The more solvent your business becomes, the more you have opportunity to choose how you invest in communities, whether that be in social programs, ESG, hiring more people, or investing in other business opportunities.

And so the company itself is kind of investing a lot of its money in innovation. It’s invested to go from a couple days to one day to one hour in its shipping and it’s costing money invested in data centers around the world to build its cloud business. And yes, it’s starting to return profit. But I worry when the government said pay more taxes, pay people more without necessarily understanding the fundamentals that run the business is, yes, it seems the company is untouchable today. But you know what? Blackberry was untouchable? Kodak was untouchable. Blockbuster Video was untouchable. But all of a sudden, you know, you start saying pay more, spend more, make less and does that start to hamper innovation?

Patrick Moorhead: Yeah, so that’s great analysis. And I know you’ve spent a little bit more time on this than I have. But here’s the thing. Amazon is a fun company to pick on because Jeff Bezos is the richest person in the world. And Amazon is doing great. It basically created the whole concept of infrastructure as a service, and they’re taking money away from their competitors. And then on the retail side, they’re doing the same thing. Amazon does pay a lot of taxes. And one of the things, and I’m glad you brought up the taxes, it pays through their workers, but how about sales taxes? Everything that’s sold by Amazon has sales tax where they have a distribution center, which I think is nearly every state that’s out there. And the other thing is, Amazon had losses for years. When you do carry forward on losses that will carry forward I think, up to a decade. I’m not an accountant. And the second thing is, is that the R&D tax credits that Senator Warren voted for a bunch of times incented companies like Amazon to make certain investments certain ways, and they did this. So they’re a target. I’m the last person that’s going to say, we need more taxes. I mean, I know gosh, even Jeff Bezos said, yeah, tax corporations more. I’m not even there. Right. I’d like to see better use of that money. And I’d like to see like what we see in the business world, outcome based things because right now, we’re taxing a lot of things. And I question what we’re actually getting back for it.

Daniel Newman: Yeah, you make so many great points. And I think I was giving one example, you gave another about where taxes generate business to generate tax through a lot of different things. There’s property taxes in every one of those facilities, so when you’re talking about taxes, you know, we tend to cherry pick our facts. And that’s something I recommend people look more deeply into. I think, also, it’s hard to talk about this without sort of looking at different issues that I probably conflated a little bit, but these are all issues that need to be considered. You’ve got how workers are paid, you’ve got how innovation is fostered, you’ve got how ESG and community efforts are handled. And then ultimately, you know, you put all these things together, but they are all interrelated. And I think that’s the hard thing. Like if you just go to a company, you start stripping off the bottom line, what happens is they hire less and they invest less, because in the end, these companies have that it goes back to what I said that fiduciary responsibility to its shareholders, people will not continue to invest $3,000 a share in an Amazon that’s making less money. They want the company to show profit, to show innovation, to show investment, and show market leadership. So we’ve got to understand all these things impact each other. I’ve got an Op Ed that will come out about this in depth. I’ll share it with everybody later to talk about this for a long time. Glad we had the chance to just kind of break the ice here, though, and I hope, you know, we can have some productive and human conversations about it throughout our communities Pat. So anyhow, any last word on that before I move on to something that we can you know, that’s a little more of a typical topic.

Patrick Moorhead: I think we’ve exhausted this thing. There are so many directions we could probably talk about this thing for I mean, you know, Amazon stock goes down, guess what? Pension funds, 401Ks, people are invested in here. And it’s just like, it’s frustrating, Daniel, it’s like, we lose our brains when we start talking about this stuff. And it’s super frustrating for me, but I think it’s probably best to move to the next topic.