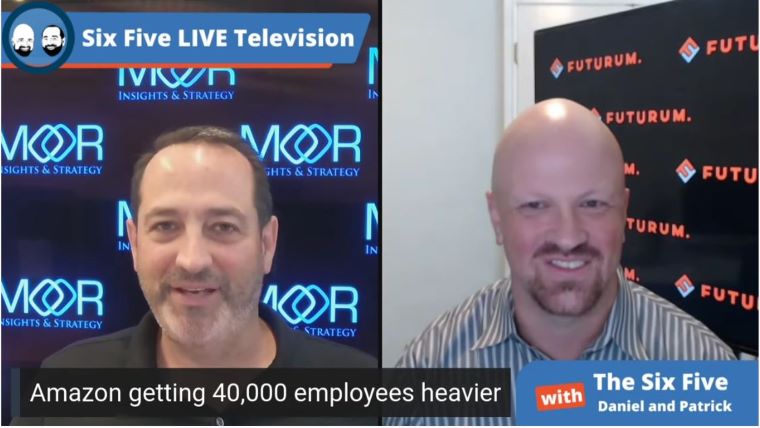 Daniel Newman: A real encouraging piece of news that broke this week, Amazon. So you and I have a lot of these discussions, Amazon is constantly in the crosshairs. People like to pick on it, but I always say, people like to pick on winners and Amazon is a winner. This week it announced another massive corporate hiring. So these aren’t jobs, they’re fulfillment centers, these are corporate jobs in tech and in administrative roles and 40,000 more employees Pat.

Patrick Moorhead: Yeah. You forgot one thing, people also like to pick on companies that are making a lot of money as if there’s something wrong with that.

Daniel Newman: I was too discriminant of that one huh?

Patrick Moorhead: Well, they’re still picking on Bezos even though he’s not even technically CEO of Amazon anymore. I mean, he’s chairman of the board so I guess this still matters, but they’re still coming after him big time. So, hey, let’s move to what’s going on here. So on the heels of Amazon adding 450,000 employees, more for their distribution centers than anything else. And by the way, those were at Bernie Sanders requested $15 per hour, full medical health benefits, a 401k, 20 weeks of paid leave for new parents, subsidized job training, that includes that. On the heels of that, Amazon had a career fair and at the career fair, they are offering 40,000, I would call it more information worker jobs around the globe, engineers, HR, finance, marketing, and it’s going to happen on September 15th. It’s open to the public, 220 locations around the world.

And by the way, I think I already gave my editorial opinion beforehand, but what I like about this is the 450,000 were mostly distribution center workers. These 40,000 employees are coming in there to even grow even more. You do need OPEX and management to manage the size of the business they have and I think it’s a good thing because this indicates to me that their business would go up. Because these are the last kind of people you would hire because they’re administrative folks aside from the engineers that’s down in that R&D line. But I think what this says is, okay, we know you’re working hard, but we see even more growth coming up in the pipeline and we’re going to bring in more people to support that. So I think that’s a positive sign.

Daniel Newman: Yeah. Pat, a good coverage from your end, read your commentary about it, very good. You and I there’s not a debate to be had here, we share a similar view of the positives of this. This is the world that we live in. Amazon is a rapidly growing company, it is owning up the responsibilities that come with that to push for higher wages, to push for greater benefits. You and I’ve been to the facilities, we’ve seen the environments, we’ve looked at all the safety and considerations given to employees. And that goes across the board. And by the way, we also know people throughout the organization, Pat, and I always say that culture is one of those things that you really get the best sense of it. And when you’re talking in the back room and you’re having a beer with somebody and you just look at their face when you talk to them, whether it’s during a meeting or just having a personal conversation and by and large, my experience with people they’re happy, they’re enjoying their experience and they’re growing.

And if they do leave, it’s usually they’re leaving because they’ve got a great resume that built while they’re there and they’ve been brought in to do a big job somewhere because of the experience, that they garnered one of the world’s largest companies by market cap and of course, by name. So good news always loved seeing jobs being added to the economy, especially with some of these recent jobs reports being less than impressive, given the circumstances and all of the openings that are out there.