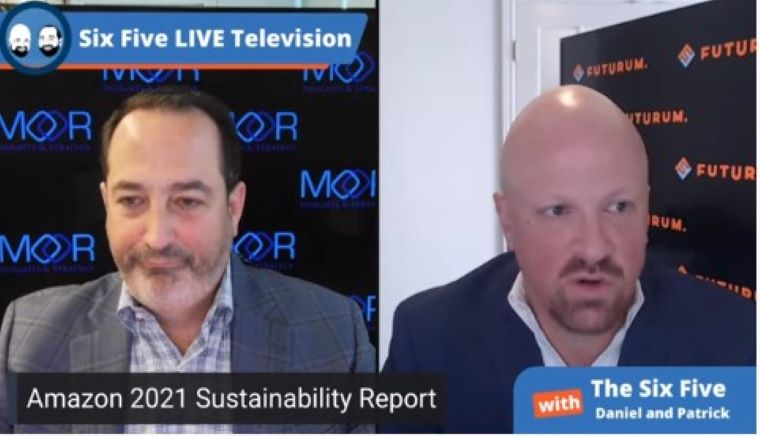 Patrick Moorhead: Amazon’s 2021 Sustainability Report. I have a report that, well, sorry, not my sustainability report. I have an analysis on the report that’s going to drop probably in the next couple days. I’ve really spent a lot of time on it. And we’re an interesting time right now related to all of this environmental, and that’s what I’m going to focus on is the environmental piece. A lot of things are going on right now. The environmental debate rages. We’ve got heat waves on at least two continents. And we have the EU being held hostage by Russia because essentially EU essentially handed over to Russia, their energy policy. So I would say environmental and energy debate absolutely rages on.

But I think companies are trying to be part of the solution out there and try to have a leadership role, if nothing else, to maybe consume less energy when they’re doing what they’re doing. Companies like Amazon get a lot more scrutiny for its sustainability reports because quite frankly, it’s marketplace success. It has a ton of data centers with AWS. They’re the number one IS provider. They’re the number e-tailer and they’re one of the largest grocery sellers out there in the United States with Whole Foods. They have hundreds of distribution centers. They have fleets of delivery trucks and planes.

So net net, and I think some of the focus, Daniel, has been this 18% increase in carbon. And I know some people are like oh, my gosh, that’s just terrible, right? But then it’s like, well, let’s actually see what did Amazon do in 2021 in compared to that 18%? Well, let me read off a few things that I found out, first of all. Almost doubled their workforce, adding 750,000 workers. Doubled its package fulfillment network. Increased package delivery, 500% and increased usage of AWS by 40%. So I don’t know.

I’m not a mathematician, Daniel, but when I compare orders of magnitude five X, two X, four X, and compare that to 18% to carbon footprint, the companies, this isn’t an official term, it’s my term, carbon efficiency actually looks incredible. And listen, the company’s not done there. They outlined things that they’re going to be doing over the next, gosh, 10 years to bring those numbers down, even farther. So net net, orders of magnitude growth in the company, 18% increase in carbon footprint. I call that a win.

Daniel Newman: Yeah. You hit it on the head. There’s a lot to digest. We’ll put a link in the show note to your article. I also link to it in an MarketWatch piece where I did talk about its recent release. We went up and have been following, I mean we didn’t go up, but we followed up in Chicago, the Rivian rollout of some of the electric vehicles for delivery. This is a company that has to balance the reality of staggering revenue growth, staggering shipment volume increases, and somehow being able to manage the expectations for doing ESG. We’ve all seen the company’s efforts to increase awareness, it’s climate pledge to move things forward, which is brought in some of the world’s most important and largest companies to participate in their ambitions to lower the carbon footprint over the next couple of decades.

And so I’m not going to sit here and scrutinize Amazon for not being able to, on the fly, increase revenue. There was a note in one of the articles that read something like, in ’19, they’re up 40% since ’19. Well, the revenue in ’19 was $290 billion and their revenue in ’21 was well over $400 billion and it’s only growing. You’ve doubled or coming on doubling your revenue and you’ve increased your carbon by about 18%. It means you’ve actually done quite a bit to reduce based upon the revenue and volume acceleration. We like to sit on our couches and have stuff delivered to us. Well that doesn’t happen without planes, trains, containers, ships, automobiles, scooters, whatever it is that these packages are coming to our door, so it there’s work to be done.

And so things like the electric vehicles are a path forward. But when we’re ordering all this stuff that gets manufactured in China, here’s a policy issue. Well, we manufacture a lot of our stuff not here. Well, could we lower our carbon footprint if we didn’t do everything as an import? That might help.

But the reality is that’s probably not going to happen anytime soon. So what we have to understand is that the process of elimination of carbon emissions is going to take some time. The company’s going to be able to do it by improving the footprint of their facilities, by improving the modalities to get packages to people’s doors, electrification will matter. But of course, all those batteries are going to have to go somewhere. We still got to issue that we’ve got to solve for there in the long run. But I actually appreciate the fact that A, I don’t think there’s a requirement for companies to put these out, these sustainability reports. The fact that Amazon didn’t really try to mask the result should be seen as a somewhat positive. I think they’re owning the result. They own that this type of growth does not come with an easy path to becoming carbon negative in terms of output.

Come with an easy path to becoming carbon negative in terms of output. So hopefully for every other company on the planet that doubles revenue, they can do it with half the emissions and then we’ll get there. But long and short, Pat, interesting report, good info, fast growth company, work to be done, but it seems like a lot of work is being done and some credit should be given for the amount of growth and the small amount of additional emission, because like I said, this is not an overnight process.