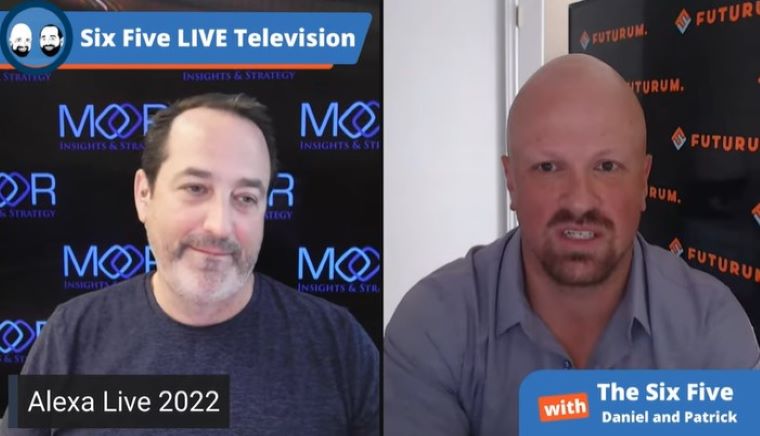 Patrick Moorhead: Amazon, as you know, has multiple businesses. And one of them is an intelligent device business, which is slowly turning into a services business, particularly when you look at what they’re doing in terms of security. And this was their once a year big event to bring new announcements essentially to their developer community. And gosh, I think they brought out 15 of them. But I think the one that I want to focus on, because I think it’s the most important, is this Alexa Ambient Home Developer Kit. So right now there’s multiple APIs for multiple disparate uses and they’re not talking to each other. Okay. So for instance, security is not necessarily talking to the matter API, which is more of a, I would say an industry standard security API is not talking to the state of the home API. Meaning is it vacation? Is it dinner time? Is it time to go to sleep?

So what this new ambient home dev kit did is unified across home state APIs, which I talked about, safety and security, which takes Alexa Guard features, and this is its home security services capability, API for credentials, which ties into matter and eliminates the need for thread, which was the previous protocol, API for device and group organizations, which enables you to sync group names between Alexa and apps -and that’s for instance, a third party app that might have a certain name for a device like “front yard camera”-and automatically synchronize that into Alexa, and finally multi admin simple setup for Matter, which gives the same admin capabilities to admin for Matter devices. So it may sound like a lot of gobbledygook, but if you’ve played around with Alexa, I think I have 27 Alexa devices across a few properties and it got complex. And when you add Matter, which is basically allowing you to talk to some Apple devices and Google devices, it just got infinitely more complex, but Amazon is trying to alleviate that with this new ambient home dev kit.

Daniel Newman: You hit that pretty well. And I agree with you, that was probably the most important thing. Another thing that’s going to be super important for Amazon Alexa is going to be the continued growth of the developer community, is building a more interest, making it more lucrative. The Apple Store and the Google Play Store have been wildly successful because you develop apps for it and it creates a big revenue. A lot of companies have been created in these app ecosystems. The ecosystem for Alexa is going to be equally important in time, is that there’s enough development going on. And so this is where the Alexa skills updates I thought were also pretty interesting. They created a skill developer acceleration platform, a skill quality coach, but really the increased revenue share I thought was interesting is that I think Amazon knows the ecosystem, the importance of development and what it’s going to play.

So it actually upped. So this is kind of the opposite, everybody loves to have Amazon derangement syndrome about everything that Amazon did wrong. Like when Amazon bought Amazon one medical yesterday, they’re just stealing healthcare data as if that’s the way they would need to get it. Because people just post all their stuff online anyway. But the lower revenue, smaller skill developers, it means if you’re making under a million, they actually increased the revenue share at 80/20 which it was 70/30. So they’re getting 10% more incentive. And that means developers can make more money, which by the way, is an incentive to build better apps. So yes, I think to your point, what was most important? The simultaneously entirely connected ecosystem that everything you bring into your house that’s connected should work together. Historically, Pat, this takes me back to my younger years, but it’s the Crestron and the AMXs and the Control4s and these control systems that used to need in your home to make lighting, shades, drapes.

And of course this was before you had things like commerce on your display. And I don’t know if you remember, they used to have a, I can’t remember- Kaleiescape is what it was called. It was a movie DVD management system that enables you from a touch panel to pick from your entire assortment of videos and be able to watch a movie in your little theater. And this was really, this was a several hundred thousand dollars product designed for the uber wealthy.

Well, of course now on Alexa with prime, you have all the content, all the videos, you can feed the content, it could talk to your smart TV or your smart speaker, or whatever, your lighting system, drapes, shades. But the one thing, reason these houses, because really every house should be able to be a smart house now, but that compatibility has held us back, making it more seamless, making it more compatible will be the difference. So it’s a good step forward. And of course having that ecosystem of developers building cool apps, cool integrations, that tends to make these things move faster. So I feel like that’s what the company is betting on.

Patrick Moorhead: Someday we’re going to get there. I think we’re in the second inning of this, the stuff is super hard, but yeah. Yeah. And I think people are, it’s so hard that people are banking on it for really simple stuff. Like wake me up. Who’s at my front door, where’s my package?