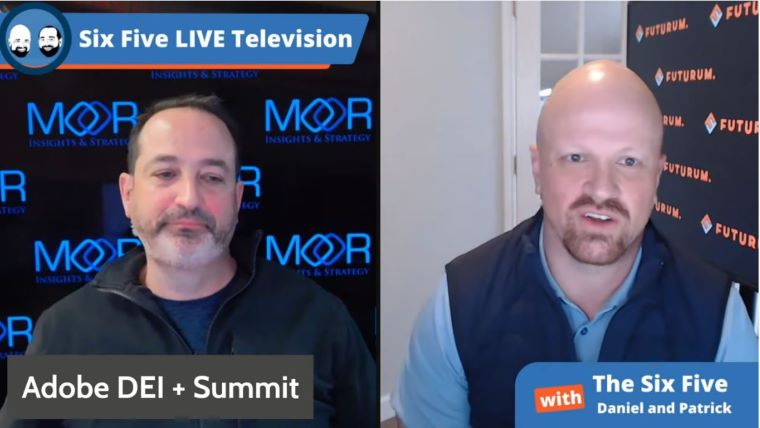 The Six Five team dives into the Adobe Summit.

Patrick Moorhead: Let’s move to the next topic, that’s Adobe Summit and they have published a digital economy index.

Daniel Newman: Yeah. Last week was Adobe Summit. It was an interesting event, a lot of speakers, leadership. They always pull in quite a show. They had CEOs from companies like Nike, Walgreens. They had Ryan Reynolds doing a session. All always about having that star studded lineup. You’re talking about a company that really does touch on all things creative, all things shopping and transaction. And one of the really interesting things that I spent some time focused on was this digital economy index. You’ve heard now me thematically talking about economics in half our topics. Oops. I don’t know what’s on my mind, but one of the things that came out that was really interesting to me was the last couple of years, we’ve heard a lot of what I would say, anecdotal type of examples of how behavior has shifted during the pandemic.

Well, instead of doing a survey or another questionnaire and asking people’s opinions, Adobe looked at the data because of the business, the technology it offers of how people are spending money online. They looked at $1.7 trillion in revenue that was spent on retail over the last couple years to look at what’s coming ahead. And so for instance, predicting, despite the fact that we’re going into potentially a recessionary environment, they still predict 2022 to be a record online shopping year. They looked at where people were shopping and what they spent their money on. I have a couple of just breakdowns here that I thought were really pretty interesting.

That in the beginning of the pandemic, lots of electronics were bought and that the most recent phase of the pandemic, you’re seeing a massive spike in groceries. People are changing the behavior. And what was also really interesting, Pat, is that a lot of people shifted into buying things that early in the pandemic, they indicated they wouldn’t buy online. I’m not doing my grocery shopping online. I’m not doing that. Well, it turns out that, that ended up being a fairly large surprise. And at the same time, the spike in electronics was down Pat, from 26% growth of online shopping in electronics to only 8% in 2021. You see where growth is happening, where growth is shifting out. And one of the really interesting things Pat, that did come out of this particular study was just how real inflation is. And that was one of the things, how do we really know what’s happening? Because I think there’s a lot of skepticism that inflation is actually quite a bit higher than some of those benchmark numbers that we get reported.

But a lot of the reason that we’re going to see record growth according to Adobe actually has less to do with overall real growth and more to do with the fact of cost of goods have gone up so much. The thought process is that we will see a ton of inflation data this year. It’s going to drive growth. And by the way, you want to know about just how bad our supply chain is? One of the numbers that came out of the index, consumers received over 59 billion out of stock messages during the last two years. Just think about that.

When we think about, we talk about chips, for instance, Pat, about this supply chain, but people can’t get notebooks, they can’t get batteries and remote controls, they can’t get odds and ends, parts and pieces to anything. And that kind of goes back to your point about anything from a lagging process tech that you can’t get. Like I said, a part for your stereo to fix in your car or in your home or your old Xbox, all the way down to, like I said, not being able to get groceries that you order. Can’t tell you how many times I get replacements sent because that’s part of most grocery store processes now. But just a fascinating swath of data that we are going to see a shift.

And the biggest, I guess, thing I’ll take away from it, Pat, is that in the end, the shift to digital is permanent. And that’s something that I think that that came out of this thing was we’re not going to see a return to more normal pre-pandemic levels but what we will see, like I said, is that a lot of these behaviors that happened during the pandemic are going to stick but that our supply chain and the issues with it are much deeper than just semiconductors.

Patrick Moorhead: Daniel, I think you got blood out of a stone on this one.

Patrick Moorhead: No, it was. I didn’t attend Adobe Summit, the company isn’t that interesting to me and that doesn’t mean, I don’t use their products. My gosh, what would I do without them and a PDF viewer and an editor.

Patrick Moorhead: I’m forced to use their, I’m sure they count me as a marketing cloud user, even though I’m kind of forced to sign up and put my stuff in the cloud. But no, you did great. I have nothing to add.

Daniel Newman: Link to my Forbes piece in the show notes, you can dive in deeper. There were so many things, I probably didn’t get to them all. And Pat, you’ve got a great fun topic so I’m going to let you retake the host seat and let’s wrap this baby up.