STEM, Advanced Industries, and The Future of Employment. – Part 1 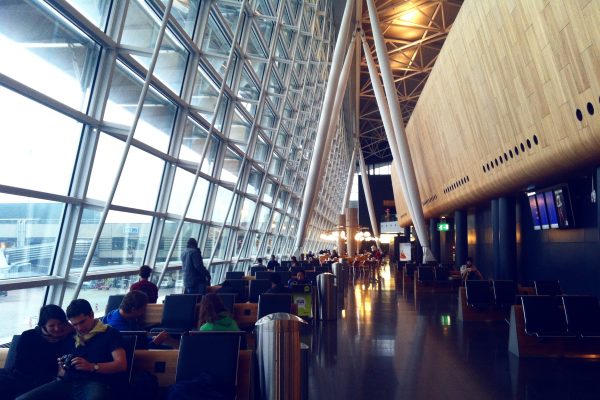 The marketing SVP I was sitting next to leaned close and whispered “what’s stem?”

He seemed a little hesitant to admit that he didn’t know what the term meant to the rest of the table, but as everyone was busy arguing about about AI and robots replacing all of our jobs someday soon, he saw an opening and took a chance. The term had bounced back and forth across the table a few times: Stem this and stem that. Was it a biotech thing? Genetic-engineering jobs? (Because stem cells, I expect.) Some kind of government tech education program?

Right. Tech jobs. Sort of. Not just tech jobs, but definitely the kinds of jobs most prized by companies right now, at least at scale.

A little background: I had just spent a chunk of my time on my flight to DFW reading up on global macroeconomic trends, and particularly how they relate to shifts in job creation around the world. (I have real hobbies, I promise, but I’m also kind of curious about a lot of tech-related topics. It kind of comes with the job.) So anyway, there I was, wondering if my newly STEM-enlightened neighbor would feel super psyched about scoring an impromptu mini-course in how STEM jobs impacted employment trends, and what we might infer about the US job market between now and 2025 given the shift to post industrialized… um… Yeah, no. He seemed like a nice enough guy, so we segued to HBO’s Westworld instead, and specifically how much of the hosts’ processes would have to be handled in the cloud, because that seemed less nerdy somehow.

Know your audience, they say.

Still though, this whole national job creation thing (which was a major piece of the presidential election discussion), and STEM, and IoT, and AI, and manufacturing vs tech… The convergence of these interconnected topics is filled with really interesting insights and catalysts for big ideas; so while my single-serving Marketing exec friend might not have been all that interested in employment data, or how STEM fields might play a part in creating a lot of new jobs in our increasingly digital economy, I find the topic particularly relevant to the world of digital transformation that we dig into here a little deeper every day.

Let me frame it in a way that will make the most sense. A lot of what we talk about here touches on the future of work: the impact of the cloud, big data, cognitive computing, the digital workforce, AI, VR, the IoT (and the IIoT), advanced analytics, 3D Printing, mobility, etc. – the tools and processes and methodologies – and how they are already shaping how companies will operate as our world transitions from yesterday’s operational models to new business models run party on ubiquitous, ambient, intelligent technologies. In other words, we usually focus on outlining and explaining various key aspects of the operational building blocks of Digital Transformation.

The topic that we are introducing today is a macro version of that. Instead of the future of work, its focus is the future of employment. Specifically: what type of impact will advanced industries and STEM jobs ultimately have on the job market? Will they help create more jobs than they eliminate? Will they help drive more economic value than other industries and job categories? Will they trigger an upheaval of the job market, and consequently force a reboot of how we approach education, both K-12 and job training? What will be the impact of these changes on the business world? How might companies, large and small, not only protect themselves from this wave of disruption, but take advantage of it to gain a strategic advantage in their respective markets?

These are the types of questions that we will try to answer in this series. For now though, let’s establish a set of baselines we will come back to in future discussions.

A Quick Introduction to Advanced Industries

The best place to start, as always, is at the beginning, and the beginning, in this instance, isn’t actually Digital Transformation, it’s Advanced Industries. The term refers to roughly fifty industries heavily centered around STEM and R&D. Among these industries are familiar ones like wireless telecommunications, computer systems design, automotive, healthcare, aerospace, biotech, household appliances, and so on.

Next, I wanted to find out how that translated into net jobs. The most recent numbers I had on hand were from 2013, but they broke down like this (rounded up or down for simplicity):

Two quick observations. The first: That’s all? (It didn’t seem like a lot.) The second: The ratio of jobs per industry category (Services vs. Manufacturing) looks pretty uneven. How can 12 industries produce more jobs than 35?

I know why. It’s a reaction, not an actual question. Rather than go off into a windy tangent on the ratio of manufacturing to services jobs, let me paint a quick picture about the evolution of the manufacturing space in recent years with two eye-opening factoids:

It doesn’t take an economist to figure out where this is going. This leads us to insight number two: If you currently work in advanced industry manufacturing, and you already know that a robot can do your job at least as well as you can (if not better or faster), you may want to consider engineering a transition to a related advanced industry services field.

Naturally, my next question hovered around job growth and trends in advanced industries: Overall, are those jobs growing, shrinking, or staying flat? Is there an opportunity here for job growth on a mass scale that the general public may not be aware of? Let’s look at the numbers:

That’s a significant uptick since 2000, but unfortunately it isn’t exactly keeping up with overall employment numbers, or driving significant job growth:

To put this in perspective, advanced industry’s share of US jobs has shrunk, not grown, since 1980:

What’s interesting though, is that for the same time period, advanced industries’ share of output has been steadily growing: 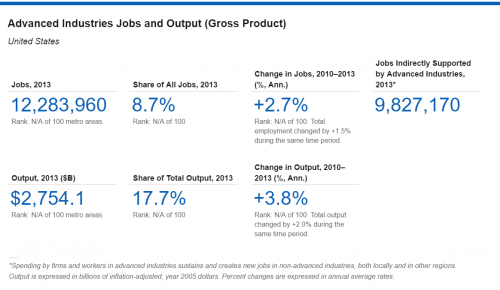 Also worthy of note: while advanced industries only account for less than 10% of US jobs, they are responsible for generating a whopping 60% of US exports, and their combined output accounted for a massive 17.2% of US GDP in 2015.

Now let’s break things down to a more granular level: Advanced industries are made up of 50 different industry subsets. Are some of these subsets performing better than others in terms of job creation and overall growth? Have some been struggling? Let’s take a look: 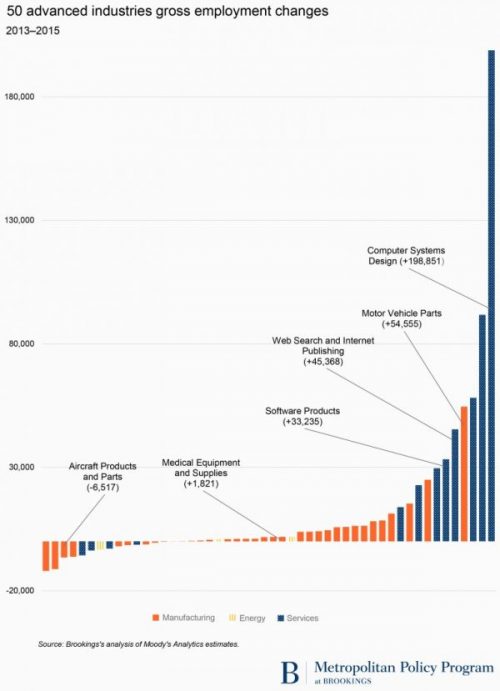 Do those four industry categories sound familiar? If you spend any time at all browsing through our insights and reports, they should. They are the sectors driving Digital Transformation.

Shifting back to blue collar jobs for a moment, advanced manufacturing industries didn’t do nearly as well between 2013 and 2015, but they still managed to contribute roughly 132,200 new jobs (about 20% of the overall advanced industry job growth). It could be better, but it could also be a lot worse. Here is the most interesting part: If you have been following the auto industry’s shift to electric vehicles and advanced navigation/self-driving systems in the last couple of years, you may not be surprised to learn that nearly 70% of those new manufacturing jobs (roughly 95,000) came from that sector.

Here’s a breakdown of how the entire ecosystem looks like: 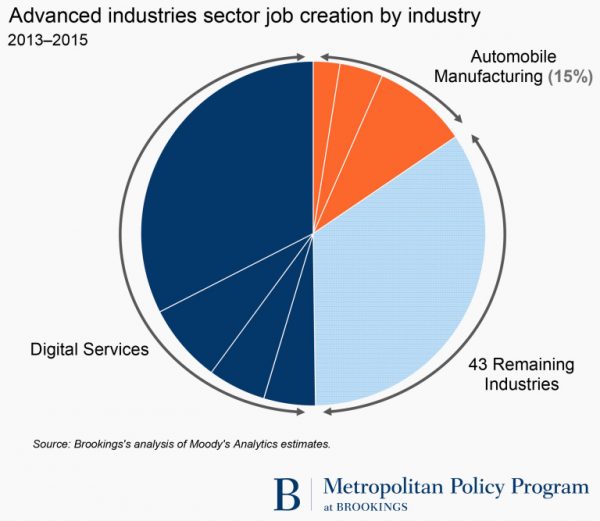 That’s probably enough data for one sitting. Now, let’s spend a few minutes thinking about all of this. What can we infer from the data we just looked at?

The first of these multiplier effects is far more difficult to measure than the second, so let’s start with the second: the supply chain. It is estimated that 2.2 jobs are created in support off every advanced industry job. (0.8 locally, and 1.4 outside of the region.) That means that we can add an additional 28.4 million support jobs to the 12.9 million advanced industry jobs in the US – for a total of 41.3 million jobs. Based on the 143.1 million figure we used earlier, that accounts for 29% of all jobs.

The second of these multiplier effects will require its own article, but until then, consider this: The application of new information and communication technologies (or ICT for short) has been demonstrably responsible for more than 1/3 of all labor productivity growth between 2002 and 2012 in non-advanced industries (like retail, business services, hospitality, etc.). As ICT become increasingly vital to every vertical and business discipline through the diffusion of Digital Transformation, the the compounded impact of the advanced industry sector’s innovation on the overall capacity, productivity, and profitability of US businesses will continue to increase.

Translation: A handful of key advanced industries are currently at the center of a tectonic shift of new job creation in the US – a first wave, if you will, whose ripples could feed industries around it if those industries are prepared to take advantage of them.