The Great Siege of Qualcomm: How Three Waves of Assaults on Qualcomm from 2013 to 2020 Helped Strengthen U.S. Technology Leadership – Part Two 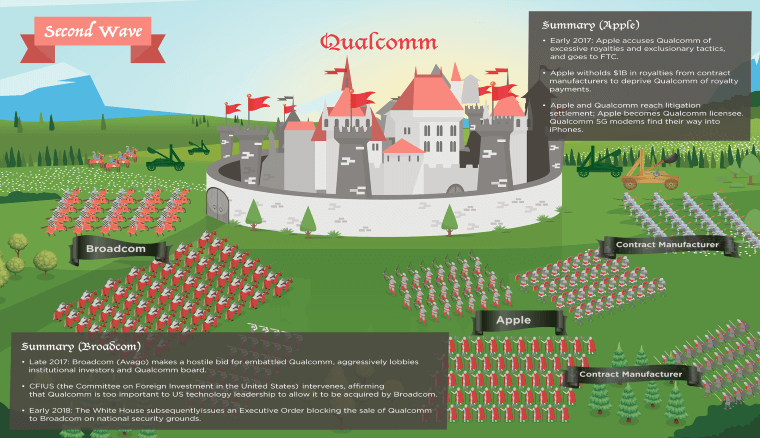 Looking at how healthy and well-positioned Qualcomm is today, especially as a decade of R&D investments and fundamental technology bets are beginning to bear fruit with the commercialization of 5G, it would be easy to forget how many challenges the San Diego tech giant has managed to overcome over the course of the past seven years. The San Diego based chipmaker and innovation powerhouse somehow found the wherewithal to fight off three consecutive waves of billion-dollar sieges over the course of roughly five years, and inexplicably emerged in better shape from its extensive ordeal.

Who tried to take down Qualcomm? What were they after? Why didn’t they prevail? What does Qualcomm’s resilience mean for the future? These are the questions I am attempting to answer in this three-part series. I’ve already published Part 1 of the series, which you can read here.

Second Wave: Attack of the Rivals

With regulators mostly satisfied with fines and relatively benign concessions acquired, the second act in the wave of sieges that rattled Qualcomm in the last few years came from rivals and other technology companies. This second wave can be broken down into two separate but concurrent sieges, one orchestrated by Apple, and the other by chipmaker Broadcom.

Having written extensively about both of these doomed ventures as they were ongoing, I would be remiss if I did not link to some of the more in-depth analysis we have already provided on both matters – you’ll find those articles hyperlinked at the end of this piece. Feel free to browse them at your convenience. For the purposes of this discussion, however, we can skip to the most important elements of both failed attempts at weakening Qualcomm.

In early 2017, following an oddly similar line of thinking as the band of regulators we just discussed, Apple filed suit against Qualcomm in Federal Court, alleging that Qualcomm was “charging royalties for technologies they have nothing to do with,” and reinforcing “its dominance through exclusionary tactics and excessive royalties,” which Qualcomm of course characterized as baseless. The idea seemed to embody a familiar theme when it comes to these types of complaints: Technology implementers, generally licensees and/or users of other companies’ IP, preferring to pay less (and sometimes nothing at all) for the use of that IP. In most instances, implementers and innovators handle these types of contract negotiations behind closed doors rather than through the courts, but sometimes, the strategy can shift, and implementers can weaponize the courts to attempt to lower the value of patents in order to be able to pay less for their use. In fact, evidence in the form of internal Apple documents came to light during the FTC vs Qualcomm trial (see Part 3 of this series) that strongly suggested that Apple had, since 2009, engaged in a deliberate strategy to undermine the value of FRAND license rates, specifically to undermine Qualcomm.

In proper siege fashion, Apple subsequently decided to try and starve Qualcomm by withholding roughly $1 billion in royalties by way of its contract manufacturers, who served as Apple’s proxy licensees for Qualcomm IP at the time. This particular exercise in the dual application of legal and financial pressure, presumably to starve Qualcomm of precious revenue and weaken investor confidence in the company’s value, finally came to an end in the early spring of 2019 when Qualcomm and Apple abruptly agreed to put an end to all litigation against one another.

One could argue that Apple overplayed its hand. For starters, Apple appears to have misjudged the extent to which Qualcomm’s financial position and resolve had been weakened by the daisy chain of fines previously imposed by regulators. Underestimating one’s opponent rarely ends well, and this was no exception. In addition to that first mistake, Apple also made a strategic error by becoming too reliant on Intel’s ability to develop a 5G modem capable of competing against a Qualcomm 5G modem in time for the first wave of 5G deployments in North America, Europe, and China. Plagued first by quality control issues, then by performance issues, it became clear in the winter months of early 2019 that Intel had perhaps run into more friction in its quest to develop a reliable 5G modem for Apple as quickly as Apple had originally anticipated. This failure to catch up to Qualcomm’s cellular modem prowess shouldn’t necessarily be held against Intel, by the way. Intel is extremely good at what it does. It’s just that acquiring and applying the type of expertise that Qualcomm has spent decades developing cannot happen overnight, or even over the course of a few short years. I admire Intel for having tried to do the impossible for Apple, but I was not surprised to see the effort fall short. Someone at Apple should have known better than to expect a different result, let alone in such a short timeframe.

Apple’s costly siege of Qualcomm ultimately ended in April of 2019, when Apple, for the very first time, agreed to become an official licensee of Qualcomm (as opposed to leveraging the licenses of its contract manufacturers), and the promise of a 5G-capable iPhone (the iPhone 12) became assured virtually overnight. All was once again as it ought to have been all along: Apple and Qualcomm working together to build the kind of iPhone that Steve Jobs would have wanted Apple customers to have.

In November 2017, emboldened by the notion that Qualcomm’s defenses had been softened enough by regulators and the prospect of a long and bloody legal battle with Apple, Broadcom, the formerly Irvine, CA-based chipmaker, acquired by Avago in 2015 decided it was time to strike. Broadcom made an unsolicited bid for Qualcomm, hoping to convince institutional investors and Qualcomm’s board that allowing it to acquire Qualcomm would result in a positive turnaround for Qualcomm’s slackening stock price. For a minute, Broadcom’s somewhat insidious strategy looked as if it might actually work: Many investors were concerned, and perhaps rightly so, that a drawn-out fight with Apple and ongoing regulatory battles would keep Qualcomm’s stock far below its potential value until the disputes were settled, which might take years. Broadcom, seizing on Apple’s apparent efforts to depress Qualcomm’s stock price, offered a solution, albeit an imperfect one…but a solution all the same.

Fears of what would happen to Qualcom’s innovation engine if Broadcom acquired its rival, likely break up the company and only keep the most profitable portions, however, prevailed. Qualcomm is the kind of company that makes long bets: generational fundamental technology bets like 5G and 6G, that may not generate ROI for years. Avago’s culture, however, is to focus on short bets with fast returns. A hypothetical acquisition of Qualcomm by Broadcom might therefore have satisfied investors in the very short term but would have likely been disastrous for Qualcomm’s ability to continue to innovate on the scale that it does. In rare and swift fashion, CFIUS (the Committee on Foreign Investment in the United States), which brings together the Departments of Commerce, Treasury, Defense, State, Homeland Security, Justice, and Energy) intervened on behalf of not only Qualcomm but the United States Government’s own interests, and affirmed that Qualcomm was too important to U.S. technology leadership to allow it to be acquired by a foreign company (Broadcom was based in Singapore at the time). The White House subsequently issued an Executive Order blocking the sale of Qualcomm to Broadcom, and that, as they say, was that.

In hindsight, this second wave of sieges was far more dangerous to Qualcomm’s survival than the first. As potentially damaging to Qualcomm’s technology licensing model as a string of “antitrust” actions undertaken around the world had been, the real cost of that series of sieges was mostly financial. With this second wave, Qualcomm found itself in more dangerous waters: Investors were losing both confidence and patience with Qualcomm and its endless antitrust battles around the world and licensing disputes with customers. The company looked vulnerable enough to be acquired by one of its rivals. Even Apple’s contract manufacturers were refusing to pay royalties for the use of Qualcomm’s IP, essentially putting in question the value of Qualcomm’s patent portfolio. Nevertheless, Qualcomm persisted…and prevailed. Apple and Broadcom both underestimated Qualcomm’s resilience and importance to the U.S. technology ecosystem, both overplayed their hand, and naturally, both of their sieges of Qualcomm failed.

In Part three, we’ll take a closer look at the third wave of attacks against Qualcomm, which involved China, Apple, Huawei, and the weaponization of the Federal Trade Commission.

Qualcomm Fights Back: Defending the Future of Innovation and IP Laws (May 2017)

Opinion: It Only Took a Few Days of Testimony for the FTC’s Case Against Qualcomm to Fall Apart, Part 1 (January 2019)