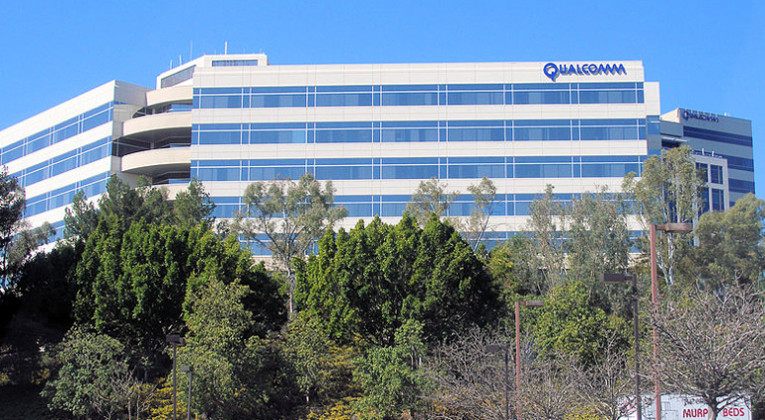 The News: Qualcomm stock rose more than 11% in extended trading as its revenue and adjusted earnings per share handily beat Wall Street expectations.

Here’s how Qualcomm did versus Refinitiv consensus estimates for the quarter ended Sept. 27:

Note: Portions of this article were originally incorporated into my MarketWatch analysis that can be found here.

Analyst Take:  Qualcomm delivered an outstanding 4th quarter result delivering Non-GAAP revenue and EPS growth of 35% and 86% YoY. These exceptional results were met with investor enthusiasm as the stock rose over 14% heading into today’s session to a new 52 week high.

Qualcomm’s highlights focused in on a number of areas, but the ones that caught my attention the most were.

Touching on each of these:

This past quarter, Apple was the latest major OEM to announce its 5G devices, and like just about all the others, Qualcomm technology is at the heart of Apple’s new 5G lineup. Qualcomm, however, is seeing its 5G business rapidly expand on both the chip and licensing side with over 700 mobile devices announced or in development using its Snapdragon 5G chips and secured long-term licensing agreements in place with every major handset OEM equating to over 110 5G agreements. 5G device availability has grown 64% in the past quarter alone. Its still early days for 5G, and the ramp of Apple and other handset makers will continue to influence Qualcomm’s future earnings results.

Qualcomm’s RF Front End (RFFE) business doesn’t receive as much attention as other parts of Qualcomm. Still, to deliver the promise of 5G, there are significant technical hurdles that have required Qualcomm to deliver improvements to RFFE, which has yielded a growing revenue stream for the company. This has also increased OEM preference for Qualcomm’s reliable 5G technology to incorporate into their devices. The result is that Qualcomm is now one of the leaders by revenue in the RFFE business as the company continues to put pressure on legacy providers in this space, such as Broadcom, Skyworks, and Qorvo. In its FY20, Qualcomm grew the RFFE business by nearly $900 million from 1.48 billion to $2.36 billion, making this growth component of Qualcomm’s chip business more than 10% of its revenue. 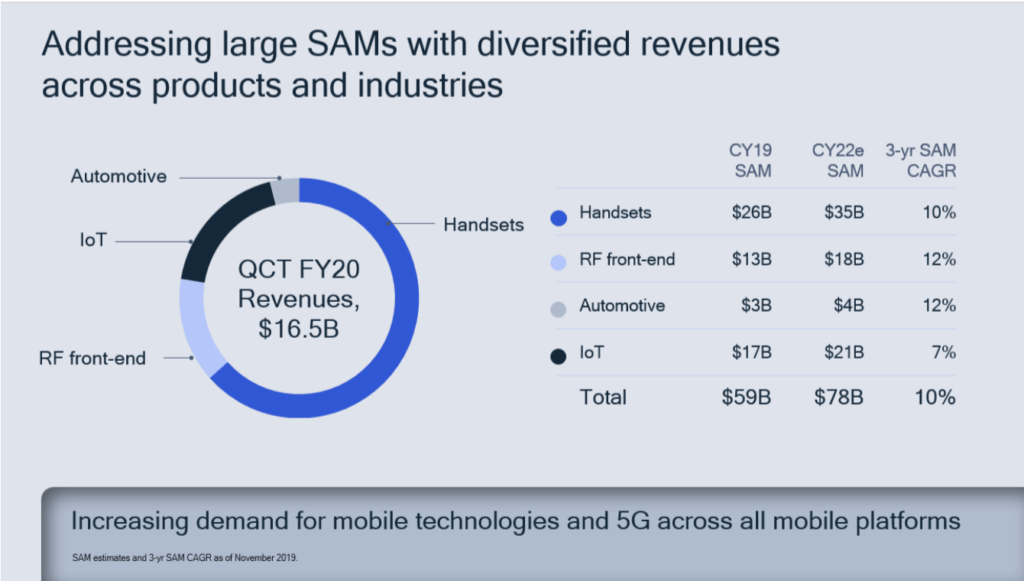 I already spoke to the RFFE adjacency, but the IoT and Automotive businesses are heating up for QCOM too. Above you can see the businesses combined grew roughly 10% from $3.3 to $3.6 billion. However, the IoT business is steady and the automotive business has significant upside as the move to more intelligent vehicles and ADAS systems continues. With an $8 billion design pipeline for Automotive, the future there is encouraging and Qualcomm’s diversification beyond handsets continues to gain momentum–this is an important detail.

I’ve spoken to this quite a bit in the past, but in the 5G era, Qualcomm is able to stake claim to having healthy licensing relationships with every major OEM including Apple and Huawei. This includes over 110 licensing agreements that should largely all see growth as 5G continues to proliferate and demand grows.

The Regulatory Battles are Ending

What I believe may be the most compelling reason why Qualcomm’s outlook is so strong is the company’s ongoing saga of regulation and litigation has seemingly run its course. Amidst multiple lawsuits and regulatory battles involving the FTC and Apple, Qualcomm had a period where its entire business model appeared to be at risk. The relationship with Apple has been rectified, paving the way for Apple’s recent 5G rollout. With the FTC, an initial district court ruling against Qualcomm threatened to force the company to renegotiate many of its licensing agreements under less favorable terms. This would have likely negatively impacted its highly profitable licensing business, and consequently also forced the company to make hard choices about what portions of its multi-billion-dollar long term R&D pipeline to scale back. After the 9th Circuit Court of Appeals overturned the ruling, the FTC made a last-ditch effort filing what is known as a request for an “en banc” hearing that could have put the case back into question. This request was denied, which indicates an apparent end to the saga. These two legal challenges for Qualcomm were the most visible, but the company also negotiated its way through tough regulatory battles in China, Korea, Taiwan, Japan, and Europe. This kept the stock price repressed for much of 2018 and 2019, but since the rulings turned in Qualcomm’s favor, it has seen a substantial upturn. I believe regulators domestic and abroad have their attention on “Big(ger) Tech,” meaning Qualcomm, for now, can focus more on innovation and delivering on its growth opportunities.

Qualcomm’s earnings results were really solid; however, I believe the company has a continued path to growth as 5G scales, its revenue sources diversify, and the wave of regulatory and legal battles has, at least for the moment, subsided.