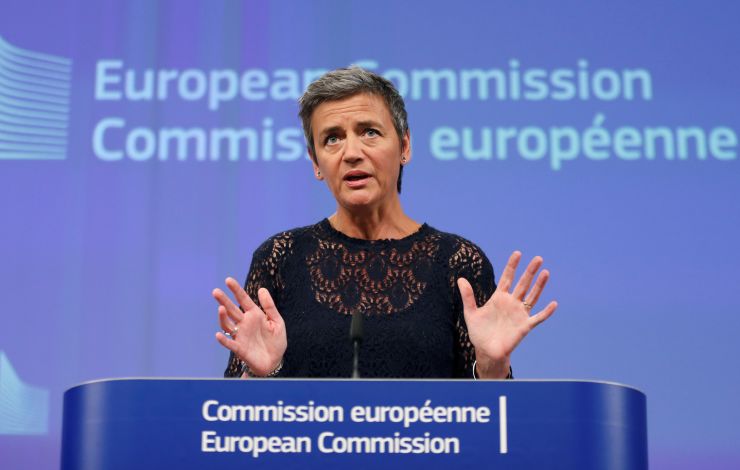 It appears Amazon is next up to be fined by EU Competition Chief Margrethe Vesteger as unnamed sources claiming to be close to the investigation have disclosed to the media. The probe into Amazon is said to be looking into efforts by the e-commerce giant to stifle smaller competitors by using the company’s massive sales data to undercut competition in the EU.

Vesteger has rightfully earned a reputation for her tough approach to big tech in her time as EU Competition Chief. During her tenure, she has aggressively probed and fined Google to the tune of more than Eight Billion Euros, Forced Apple to pay more than a billion Euros in back taxes and also fined Qualcomm nearly a billion Euros as well.

Read more about the EU’s alleged plans to fine Amazon and Qualcomm on Bloomberg.

Analyst Take: No question, Vesteger is a firm proponent of helping out smaller companies that cannot defend themselves. This, at least in theory, would seem to be the case. Her track record of imposing significant fines on the likes of Google, Apple and Qualcomm during her five year tenure, shows that she isn’t backing down from big tech and will make them pay when she sees their tactics as creating an unfair advantage in the EU.

The rumor, or should I say rumour, is that Amazon is next in line, with Qualcomm also possibly waiting in the balance with their fine being related to the discounting of product to “eliminate” a smaller competitor in the region. The fine amounts have not yet been disclosed, but based on history, it is easy to expect them to be in “billion(s)” region.

The Verdict on The Possible EU Competition Fines

I believe these fines have their merits, but what is harder to see is how the fines are being reinvested in the smaller businesses that they are designed to protect. The EU, has certainly shown a greater propensity to push more transparency on big tech, specifically with data. As most people are aware, the well-touted GDPR regulations are EU legislation and are designed to protect the EU consumer AND hinder the abuse of data. While the fines that many thought would be rolled out after GDPR was passed have been somewhat muted, there is speculation that they will be coming.

While GDPR and the fines in question going toward Amazon and possibly Qualcomm aren’t directly related, there is a correlation between the tough positioning of the EU and the aggressive data overreach that has become the norm within the tech industry (and actually all industries seeking better CX). If Vesteger and the EU are able to propose more than a fine, but some material means for improving smaller enterprise competition, then I would say the efforts have merit. The problem is, as we’ve seen recently with Facebook, is a fine of 3, 5 or even 10 billion to a company the size of Amazon would likely have no meaningful impact on how these companies function. So unless the fine uses the dollars to enable competition, they act as nothing more than a small tariff. I’m betting on the latter.

The problem for Vesteger and smaller businesses feeling the indigestion of Amazon’s continuous domination in nearly every market they enter, is none of this truly does anything to stimulate smaller companies, nor does it provide meaningful stimulus to help them be more competitive in the future. Even as an outspoken advocate for better privacy regulations and improved data handling/protection, the reason Amazon continues to win in so many markets is because they have executed better, developed a better mousetrap and created the user experience that people want. Punitive fines won’t fix the lack of competition, and while tariffs and fines may create a more level playing field if they are significant enough, the problem there is the higher prices will be felt by consumers and this will lead to less disposable income (The net of dollars spent if all things even will be more per completed purchase, but will likely yield less overall purchases).

Another day, another massive fine by regulators. A tax? A tariff? Maybe yes to both. Will it change anything? Sadly, I’m confident that the answer is no.