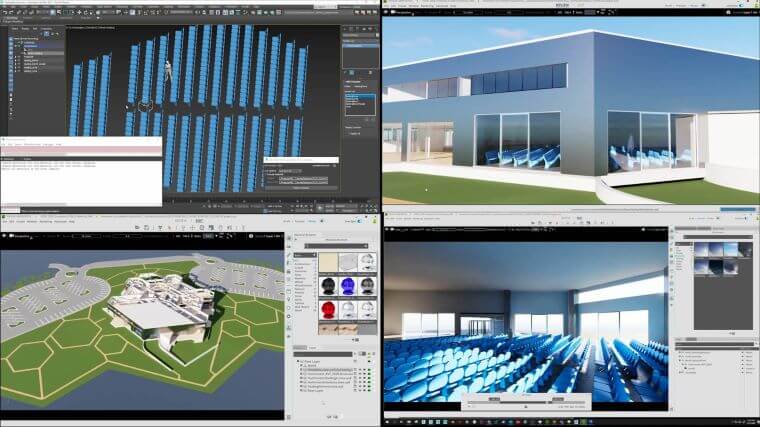 The News: NVIDIA has announced the coming general availability of Omniverse Enterprise, an RTX-based multi-GPU simulation and collaboration platform that enables global 3D design teams working across multiple software suites to collaborate in real time in a shared virtual space. NVIDIA Omniverse Enterprise makes it possible for 3D production teams — which are often large, diverse in skills and geographically dispersed — to work seamlessly together on complex projects. Rather than requiring in-person meetings or exchanging and iterating on massive files, designers, artists and reviewers can work simultaneously in a virtual world from anywhere, on any device. NVIDIA Omniverse Enterprise has been in early evaluations with some of the world’s most sophisticated design teams at companies like BMW Group, Foster + Partners and WPP. It follows the launch three months ago of an open beta for individuals, which has been downloaded by nearly 17,000 users. The Omniverse platform is scheduled to be available this summer as a subscription-based, per-seat service. Read the press release from NVIDIA here.

Analyst Take: NVIDIA’s Omniverse enterprise platform sets the stage for NVIDIA to do what it does best, open new market opportunities for its customers and enhance its competitive moat. I see tremendous potential for Omniverse and its ability to reshape the future of any industry involved in manufacturing and design and collaboration as well. Here’s why…

Imagine your favorite movie. The action, the characters, the traffic, and the noise. Now imagine you’re standing there in the middle of it. Virtually. There’s the row of stolen cars that John Wick is about to walk past. There’s the bustle of activity in the corner where something is about to happen. But it’s not a movie, it’s your manufacturing facility. And you’re standing in a virtual version, a digital twin of the real thing.

Every device in the real facility has an array of IoT (Internet of Things) sensors that capture all of the physical and digital actions. That data is captured in real time and fed into this virtual simulation, the simulation that you’re now standing in.

You look around and hear the hum of the AC units and wonder “what would happen if we adjusted the temperature? Or if that unit failed? How long before we had to stop production?”

You query your staff and ask them to isolate the assembly bots that generate the most heat and see if there is a way to reconfigure the production line to have them closest to the emergency cooling system. They run the simulations as you stand there in the middle of the facility and then, like Neo’s Matrix, the entire facility morphs into something just a bit different. Just a bit more efficient. A bit cooler. And with less stress for the staff. You’ve just reconfigured your facility.

Your changes are automatically sent to your suppliers and partners and within minutes your entire supply chain and distribution system has access to your new model so they can test, comment, and collaborate securely with your team on the proposed changes.

Together, you test it, running days, weeks, months and then years of simulated operations, noting what works, what doesn’t, and then refine the model until asset availability is maxed out. Your IT, operations, HR, and finance teams are all involved, as are sales. Your PR team will follow.

When you’re done, a proposed update to the physical facility is drafted and implemented. That’s the power of the NVIDIA’s Omniverse, the ability to capture an organization’s entire operations in real time and model it forward. Improving it. Testing it. And, based on massive amounts of data and machine learning, anticipating the unexpected before it occurs.

There are five components of NVIDIA’s Omniverse Enterprise platform:

One of the things I’ve always enjoyed about NVIDIA is its approach to the market. Looking beyond its own products, NVIDIA focuses on its customer’s applications and the growth of their own industries, such as Graphics, Gaming, Autonomous Vehicles, and Artificial Intelligence. But NVIDIA’s Omniverse is, in a way, universal with the ability to help all industries get the most value out of their business (and NVIDIA’s chips and technologies).

Within NVIDIA’s Omniverse, complex worlds can be designed to mimic both the virtual and the real world. With enough inputs that represent real-world assets, you can mirror reality in real time, which is exactly what BMW is doing today. BMW has 31 factories and 57,000 employees distributed around the world and is constantly changing its production lines to accommodate different production runs and vehicle customizations. By capturing data from its factories and creating a digital twin within the Omniverse, BMW’s distributed teams are able to collaboratively design, test and reconfigure individual manufacturing lines, including using employees wearing motion-capture suits to gather real-world data and virtually test new designs.

As I mentioned above, I see NVIDIA’s Omniverse as a tool that could help reshape the future of manufacturing. But I also see the possibility for this type of collaborative simulation tool to model and improve not just manufacturing but all aspects of any business in almost any industry. Welcome to the virtual future of business planning.

NVIDIA’s Future is Bright as its Many Bets are Paying off: Q4 Earnings Update