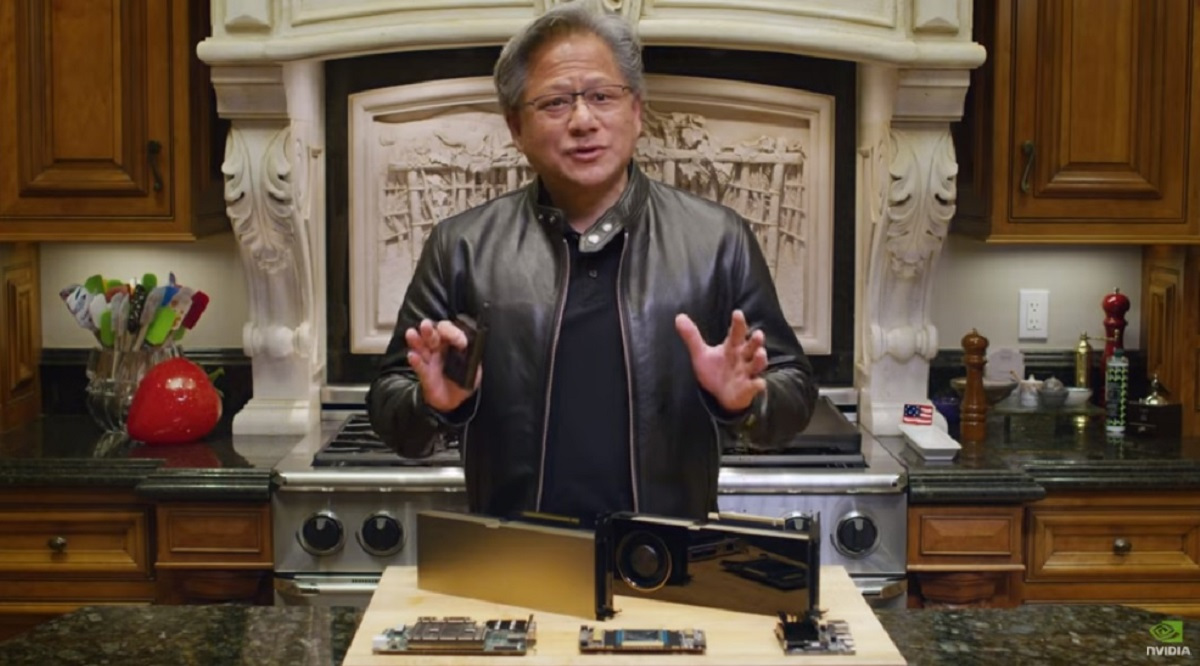 The News: Nvidia reported earnings on Wednesday for its second fiscal quarter that ended on August 1, beating Wall Street estimates because of strong graphics cards sales.

However, Nvidia’s cryptocurrency chip products, CMP, had lower sales at $266 million than the $400 million the company predicted in May. Shares of Nvidia were up over 1% in after-hours trading.

Here’s how the chipmaker did versus Refinitiv consensus estimates:

Analyst Take: NVIDIA’s momentum continued into the second quarter of its fiscal year as the company realized several record-breaking results, including:

• Record Gaming revenue of $3.06 billion, up 85 percent from a year earlier

• Record Data Center revenue of $2.37 billion, up 35 percent from a year earlier

• Record Professional Visualization revenue of $519 million, up over 100% YoY

This quarter’s results represent 10 straight quarters outpacing expectations for both the top and bottom line.  Impressive results at face value, and as you dig deeper, there isn’t much not to like. With Mellanox firmly included in the numbers for the past 4 quarters, we are seeing its robust impact on the acquisition, and if you track the past 10 quarters, you can see in its key segments the growth has been strong, and while growth in smaller categories have lagged, this quarter even saw a big pop and record breaking revenue for its ProViz business unit and large YoY and sequential growth in its OEM unit most likely powered by growth in its Crypto Mining Business.  However, the crypto growth did fall short of expectations by about 33%. 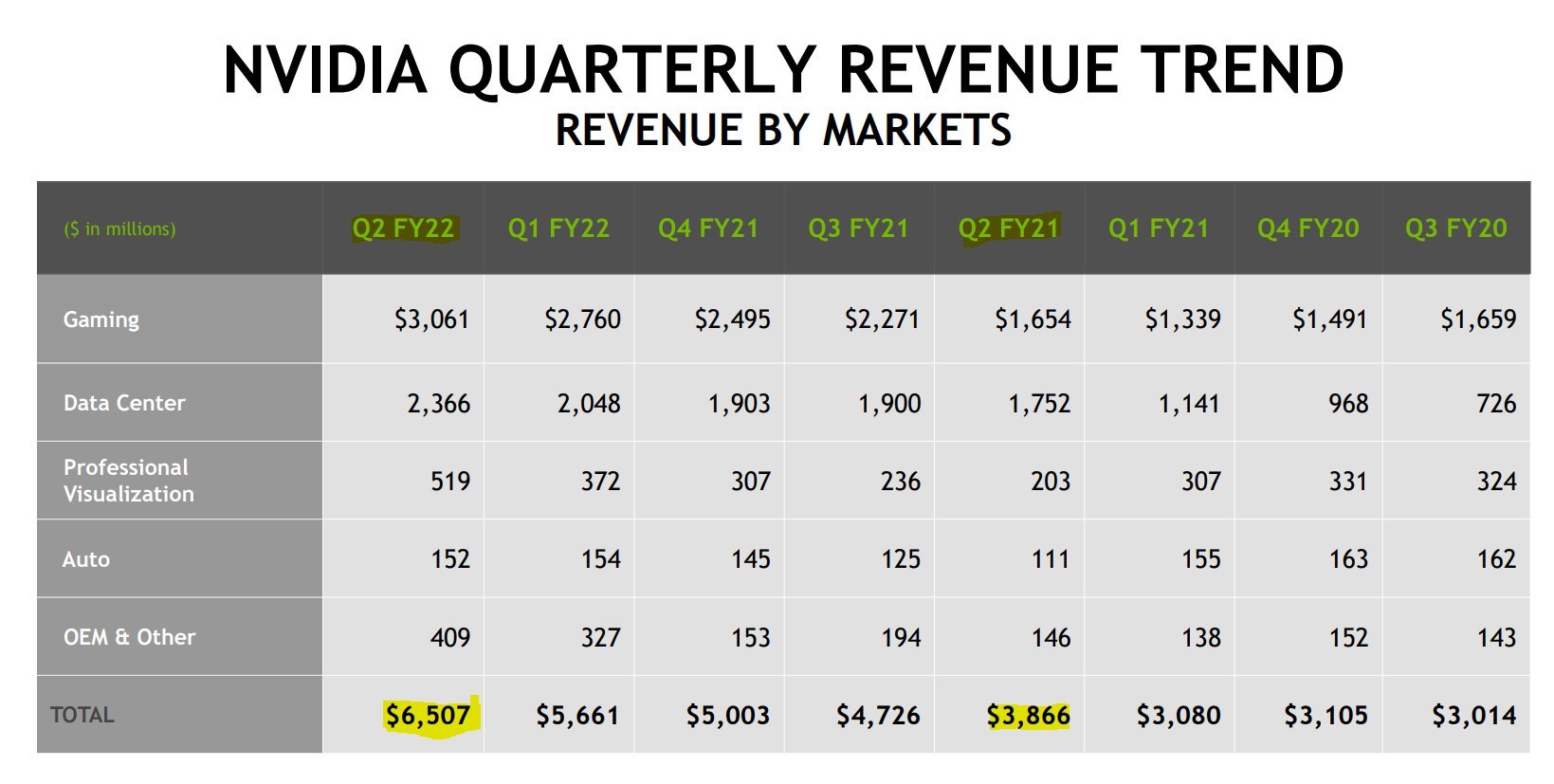 The excitement around NVIDIA will continue throughout the year, and the pending acquisition of Arm will continue to be a hot topic around NVIDIA as investors are beginning to fully understand the implications that this acquisition could have for NVIDIA’s long term trajectory. I stand by my assessment that this will be a complicated transaction that will all but certainly face legal challenges and regulatory scrutiny, which we began to hear more about this past quarter, but there are no strong indicators at this point in time to suggest it won’t be completed–Such an outcome will be very good for NVIDIA as it provides the company a path to compete in the CPU space and add a licensing business with global scale.

Gaming reached a new record-breaking number at $3.06 billion, reflecting a growth of about 10% on a sequential basis and 85% YoY. These numbers were backed by its second generation RTX products including the 3080 and 3070. RTX momentum also saw its number of titles usurp 130 during the quarter. Also, GeForce Now continues to gain momentum surpassing 1,000 titles making it the largest available streaming service for cloud gaming.

NVIDIA’s gaming business continues to be a pillar of its upward trajectory, representing nearly 50% of its revenue each of the past four quarters.

Datacenter continues to be a fast growth component of NVIDIA’s business seeing growth both through acquisition and organic adoption of its leading AI solutions. This quarter marked yet another record-breaking revenue number, coming in at $2.37 billion.  This reflects an all-inclusive YoY growth number of 35%. Sequential results for datacenter came in at 16% growth and this number reflected a fourth consecutive record-breaking result.

The quarter saw a mass of announcements from the datacenter business unit, with several warranting extra attention including:

While these were only a portion of the highlighted datacenter updates from this quarter, the new offerings, supercomputing wins, and major public cloud-adoption updates allude to the momentum that I have been tracking within NVIDIA’s datacenter segment. I expect the datacenter business will continue to grow as the company’s investments in AI are rapidly evolving to address much more than training, addressing the significant opportunities for enterprise AI. This growth will be further emphasized by the overall TAM expansion for enterprise AI as use cases and adoption continue to scale and gain further definition.

NVIDIA started off its FY ’22 with strong momentum and record breaking results in 3 of its segments including its two largest. The momentum for the company seems to be gaining steam through innovation, acquisition(s), and of course, record-breaking results. This is further accelerated by its positioning in a key growth area (AI), and seems to be working around any macroeconomic forces including the chip shortages that have constrained many industries.

While the gaming results continue to be outstanding, for me, the most notable thing is the rapid momentum of its datacenter business. With another record breaking result, it is clear that AI adoption is accelerating, and NVIDIA is continuing to operate as the market leader in this space while holding onto its AI Training market share and expanding its influence in the inference space.

With forward-looking revenue of $6.80 billion coming in ahead of analyst expectations, it suggests we will see another positive quarter ahead. It will be interesting to keep tabs on the growth, the impact of supply chain interruptions on its Q3 guidance, and the further development of the Arm acquisition as regulators and competitors continue to raise concerns about the deal.