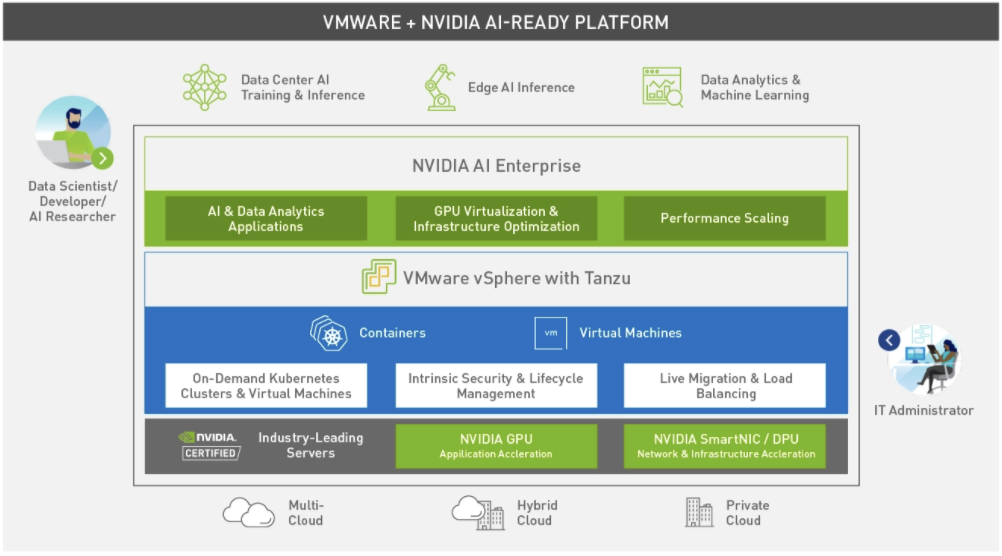 Announced last fall at the VMworld 2020 conference, the alliance between the two companies spans a range of initiatives that focus on deploying VMware virtual machine software on top of NVIDIA’s graphical processor units (GPUs) from NVIDIA.

Analyst Take: Today’s announcement of the general availability the partner offering from NVIDIA and VMware provides a simpler deployment route to leverage the powerful capabilities of VMware’s software that have long been utilized to run traditional software on CPUs and evolve these capabilities to handle the growing demand of delivering similar capabilities for AI workloads running on GPUs, in this case NVIDIA’s market leading GPUs.

What the NVIDIA and VMware Partnership Offers

Effectively, with this announcement, VMware and NVIDIA are integrating the NVIDIA’s artificial intelligence applications for unified management of apps, security and data processing unit accelerators. Perhaps more importantly, the partnership acts as validation of NVIDIA’s role in hybrid clouds, which have gained significant momentum in the past few years, as VMware outlined an architecture that incorporates data processing units (DPUs) in the data center, cloud and edge. Specifically, AI software on NVIDIA’s NGC hub will be integrated into VMware vSphere, Cloud Foundation and Tanzu. Perhaps the most important thing to note is the near “Bare Metal” level of performance of this partnership offers–even for large and complex deep learning models. This level of performance is a byproduct of the partnership coupled with the high-performance capabilities of the A100 GPU. I believe much like VMware, as well as offerings like RedHat, Azure Arc and HPE Container Platform, have democratized hybrid cloud, the expectation of this partnership is the ability to speed up the deployment of AI workloads and speed up enterprise AI adoption cutting across the typical silos that have divided AI/ML projects and traditional IT across the enterprise.

Overall Impressions of the NVIDIA and VMware Announcements

Last year, this announcement caught my attention not only for the technology, but for the problem it is trying to solve to democratize AI.

It remains my impression that this partnership between VMware and NVIDIA should gain immediate momentum as the two companies working together here are seeking to solve a bigger challenge of making AI more available and usable at scale for more enterprises and organizations. The development and access of GPU optimized containers and models, for instance, is an important toolbox for developers and data scientists. Additionally, with NVIDIA AI Enterprise running on vSphere, organizations can create a more ubiquitous environment for AI-specific systems that have often been deployed as silos or outside of the IT realm, making them difficult to manage and secure.

I’m interested in watching this partnership develop as NVIDIA continues to gain momentum in the datacenter and AI adoption becomes more prevalent within the IT organization.