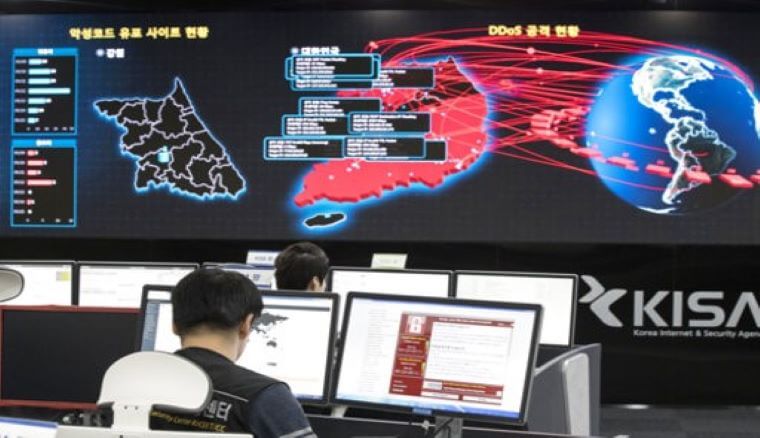 The News: North Korea’s state-backed cybercrime workforce (aka Lazarus) just can’t quit its pet-approach to phishing attacks; Posting bogus opportunities on job boards – this time targeting would-be employees for the crypto giant Coinbase. For their part, Apple, whose M1 chips were vulnerable to the attacks, took swift action to revoke the certificate which enabled the malware to execute.

Cybersecurity software producer ESET first sounded the alarm on Twitter after their research arm learned that a Mac executable disguised as a job opportunity had been uploaded to VirusTotal. Read more about the threat from DarkReading. 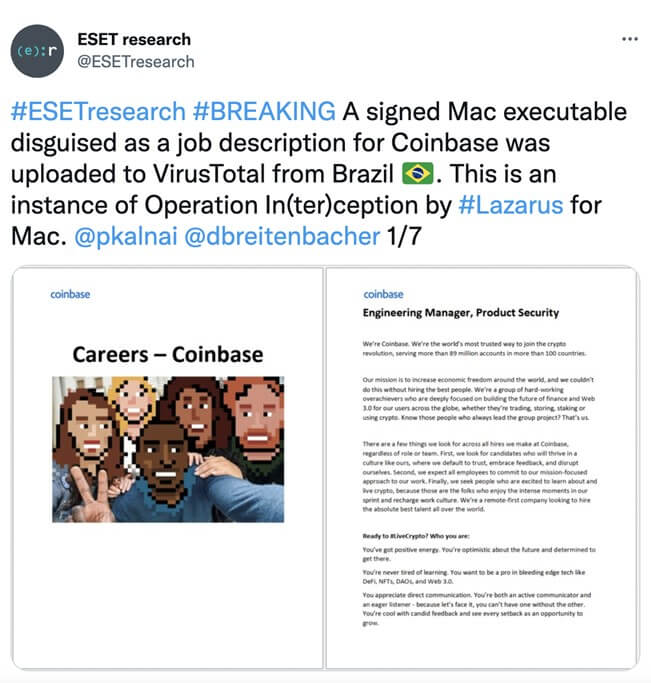 Analyst Take: ESET’s research arm has been closely watching the Pariah state’s Operation In(ter)ception since early 2020 when it found evidence of attacks against military and aerospace companies. At the time they produced an extensive white paper on the topic and concluded that North Korea’s main goal for the malware was espionage. The group was already placing a file titled “Interception.dll” to draw in victims with completely fabricated, though convincing, job opportunities via LinkedIn and other popular job-search sites.

According to ESET’s Twitter thread, the newest iteration of Operation In(ter)ception malware can penetrate both Intel and Mac Silicon. The cybersecurity giant warned of three files left by the malware: a decoy PDF document Coinbase_online_careers_2022_07.pdf, a bundle http://FinderFontsUpdater.app, and a downloader safarifontagent. The Twitter thread goes on to break down each element of the program and how they work together to gain access and information.

It may seem ironic that folks who are seeking positions at a large tech company would be so easily victimized by a phishing expedition, but there’s a method to the madness.

In order to hoodwink relatively tech-savvy job seekers, it’s likely that the attackers were in direct contact with their victims, Peter Kalnai, a senior malware researcher for ESET, told DarkReading. “The victim was probably instructed to click whatever popup windows showed up in order to see the ‘dream job’ offer from Coinbase.”

“The certificate has been revoked, so it’s not possible to execute it until the user adds it to allowed applications,” continued Kalnai, stating that Mac users running OSX Catalina or later now had some level of protection from the malware’s current iteration. But before you breathe too easy, consider Kalnai’s description of the advanced nature of Lazarus operations: “This remains a threat when the attackers start to be convincing enough to trick the victim to overcome those obstacles with execution.”

Kalnai isn’t alone in his concern. Former White House Senior Director of Cybersecurity Policy, Andrew Grotto, who held the role in both the Obama and Trump administrations and now directs Stanford’s Center for International Security and Cooperation also escalated the alarm, warning that North Korea’s ability to execute high-level cyberattacks had very quickly gone from an “aspiring antagonist” to successfully positioning itself as “a [if not the] top, cyber operators when it comes to high-end potential crimes.”

Google’s Cybersecurity Efforts to Include Mobile Devices as Security Keys