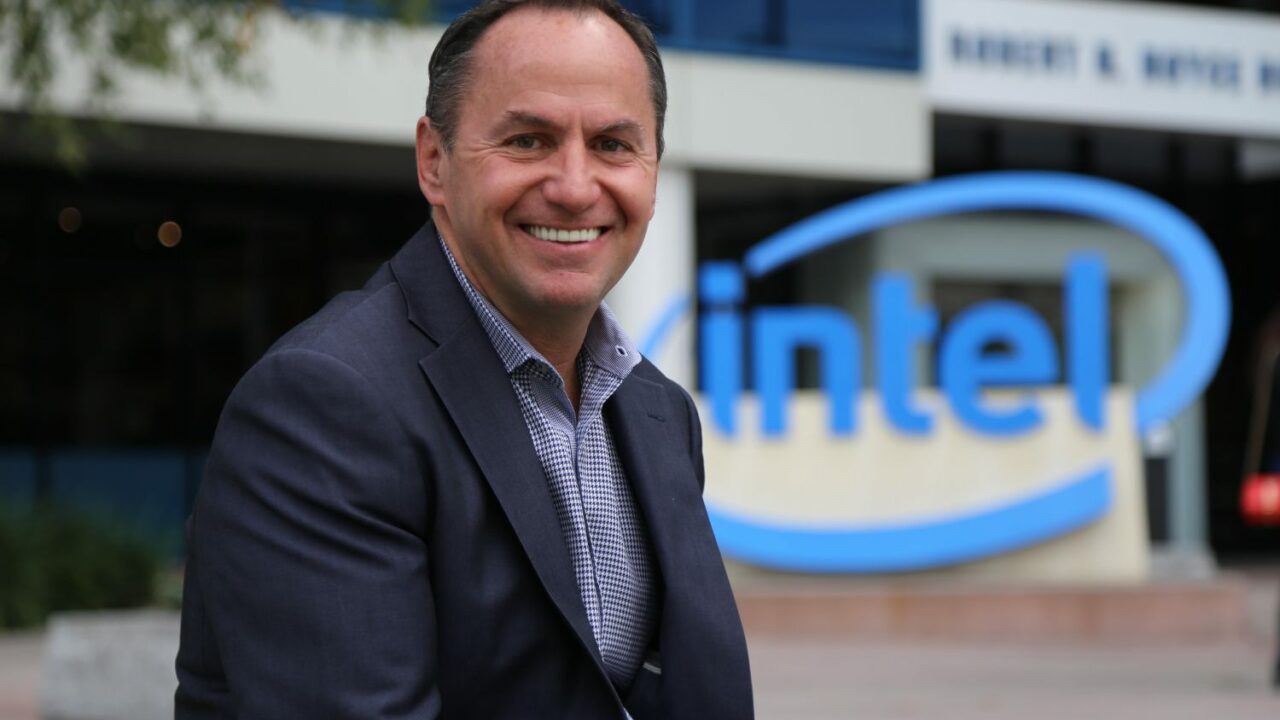 The News: Intel shares fell as much as 10% in extended trading on Thursday after the company reported fiscal third-quarter earnings that were stronger than analysts had expected but showed new weakness in its data center business.

Overall, Intel’s revenue in the quarter, which ended Sept. 26, declined 4% on an annualized basis, according to a statement. In the prior quarter revenue had increased 20%. Read the full Earnings coverage on CNBC. 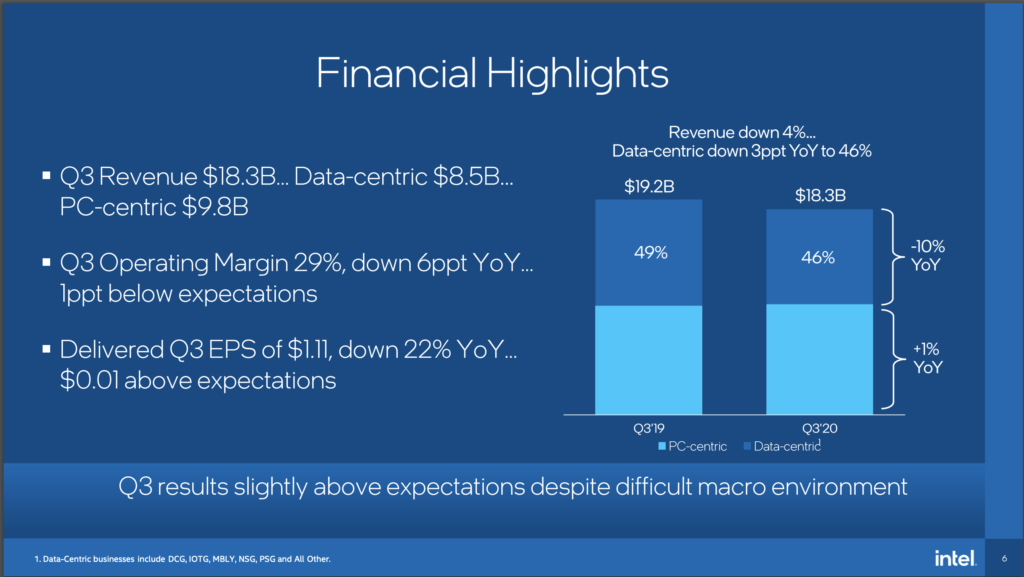 Analyst Take: Intel had a relatively good performance in Q3, beating on revenue and meeting expectations on earnings. Revenue came in at over $18 Billion, and earnings came in at $1.11. Heading into the 4th quarter, Intel said it expects $1.10 in adjusted earnings per share on $17.4 billion in revenue. This revenue forecast implies a decline of about 14% YoY, and I’m sure the street will respond to this somewhat harshly. Analysts polled by Refinitiv are looking for $1.07 in adjusted earnings per share and $17.36 billion in revenue in the company’s full quarter. The company has maintained its full-year guidance above $75B–a strong number showing confidence in its 4th quarter estimates, and it is worth noting here that the company will have shown mid-single-digit growth in both PC and Data-Centric–A solid overall performance given the vast challenges experienced by the company in 2020.

Despite the on-par performance this quarter and the overall positive sentiment that the company shared, the market reacted somewhat adversely by selling off after hours, which saw the stock price fall between 8-9% after hours. I found this only mildly surprising considering the “Edgy” nature of investors right now as we continue to battle with Covid-19 and the election’s economic turmoil.

Much of the softer results in Intel’s fiscal third quarter were announced in the Q2 earnings. This also saw a harsh reaction from investors despite its Q2 results being very strong–especially in the data center. However, delays in its 7nm were a big focus along with the softer guidance, which drew away from what was a good performance in the previous quarter. It’s a bit of a trend in terms of the reaction, but it is important to point out that a lot of the numbers have been much better than the reaction, and progress that has been made seems to get a lot less credit than the hiccups that have surfaced in process and supply chain.

Breaking Down the Businesses – DCG, NSG and Client All Showed Growth

When you look at the business units, there is a mix of encouraging data and some areas to keep an eye on due to softer results. The company saw a reversal with revenues declining in Data Center Group (DCG) and Non-Volatile Memory Solutions Group (NSG), while Client Compute Group (CCG) had a slight bump (1% YoY). After last quarter’s record-breaking revenue in all three areas, it is understandable why these numbers may have brought a pause. However, DCG, for instance, saw 30+% growth in the last two quarters, and the business is still expected to have mid-single-digit growth for the year, so I look at the results as more “Lumpy” than poor.
As mentioned, Intel DCG showed a big fall-off in this quarter with a 46% decline. Network, IoT, and Professional Services all saw double-digit declines this quarter as well, making this a tough quarter for this business, which has been a bright spot all year.

One area of the business that shined was the automotive business, with MobileEye seeing a 60% growth this quarter YoY. Signs of life for ADAS and Autonomous Vehicles. 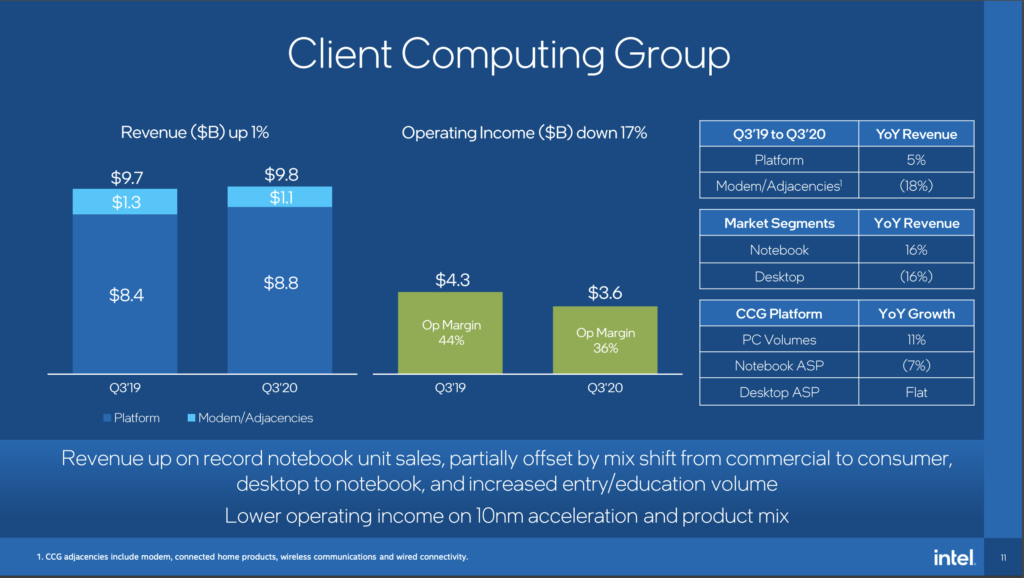 Finally, the PC group (CCG) was up 1%, driven by strong notebook sales, but these largely offset desktop volume declines. The margin was further stressed by the ramping of 10nm, which performed better than expected on volume, but as expected based upon earlier announcements, it would also reduce the margin. With the pandemic keeping more people and businesses operating from home, the notebook increase has been somewhat expected, but some signs could be slowing after the initial wave.

On an M&A note, just ahead of earnings, the company announced an agreement to sell Intel NAND memory and storage business to SK hynix for $9.0 billion. I believe this move will serve Intel well, exiting a lower margin, less proprietary business to focus on higher-margin opportunities in PC and Datacenter. With this announcement, the company also announced an accelerated $10 billion stock repurchase program. This should help support the share price, providing a level of stability, but stock repurchases are being scrutinized a bit more during this economic uncertainty. I still believe it is a good move for signaling confidence to investors. 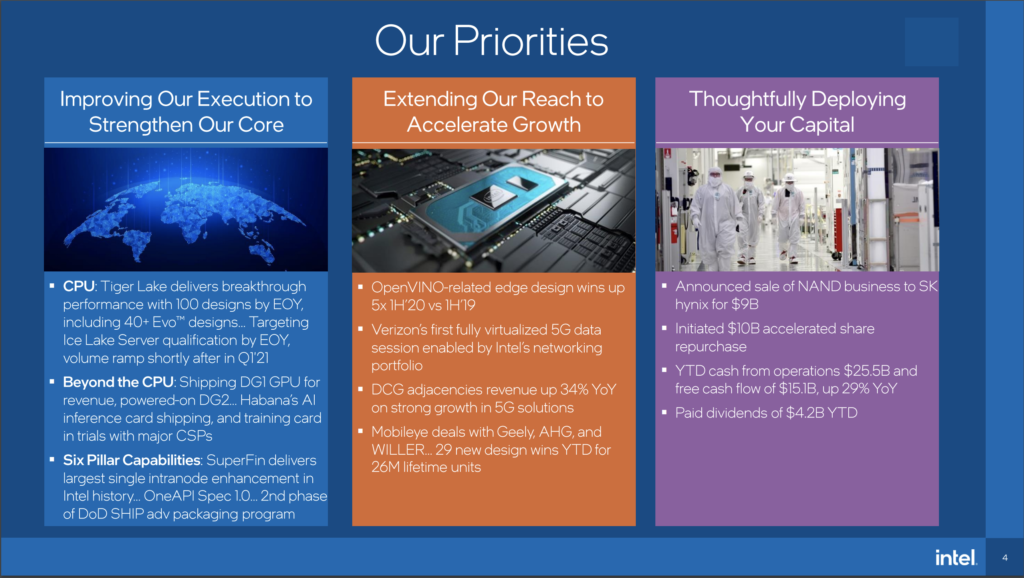 In the earnings presentation, Intel provided a deeper look and reminder into the company’s worth examining priorities.

First of all, revenues aren’t always consistent, and businesses have ebbs and flows. Intel had tremendous financial performance in the first two quarters of the fiscal. Still, its process and supply chain challenges overshadowed the financial numbers as analysts and pundits claimed that the long game looked bad as competitors passed it in process and innovation. This quarter, the financials were solid but not as exciting. Still, the company showed meaningful improvements in process with Tiger Lake, and it divested the NAND business raising capital and accelerating buy-backs. The street and analysts once again didn’t like it. In short, Intel is the incumbent and, to some extent, a victim of its success. Yes, 7nm needs to happen more quickly, AI needs to be addressed, and management needs to stabilize further. But, the numbers are strong, the market share is strong, customers and partnerships are strong. The reaction to every negative stimulus seems overblown.

With that in mind, I believe Intel is being disciplined in fixing its issues, being prudent to investors, and, perhaps most importantly, being diligent in serving its customers. Intel is still the most common CPU in the data center, and the company has massively expanded its TAM to benefit from networking, security, edge, IoT, AI, automotive and more. And perhaps more than anything, I believe the numbers and investor returns come when the business is run well, and I see many encouraging signs that is the case.

Intel has more competition than it did just a few years ago. AMD and NVIDIA are formidable, and the Arm acquisition strengthens NVIDIA further. Qualcomm is also sure to be competitive in parts of Intel’s business, and there are plenty of other companies nibbling around the edges of semiconductors. However, Intel is generating strong revenues and growth, even amidst some of its biggest challenges. This should serve it well as it continues to improve its operations and deliver against its priorities.