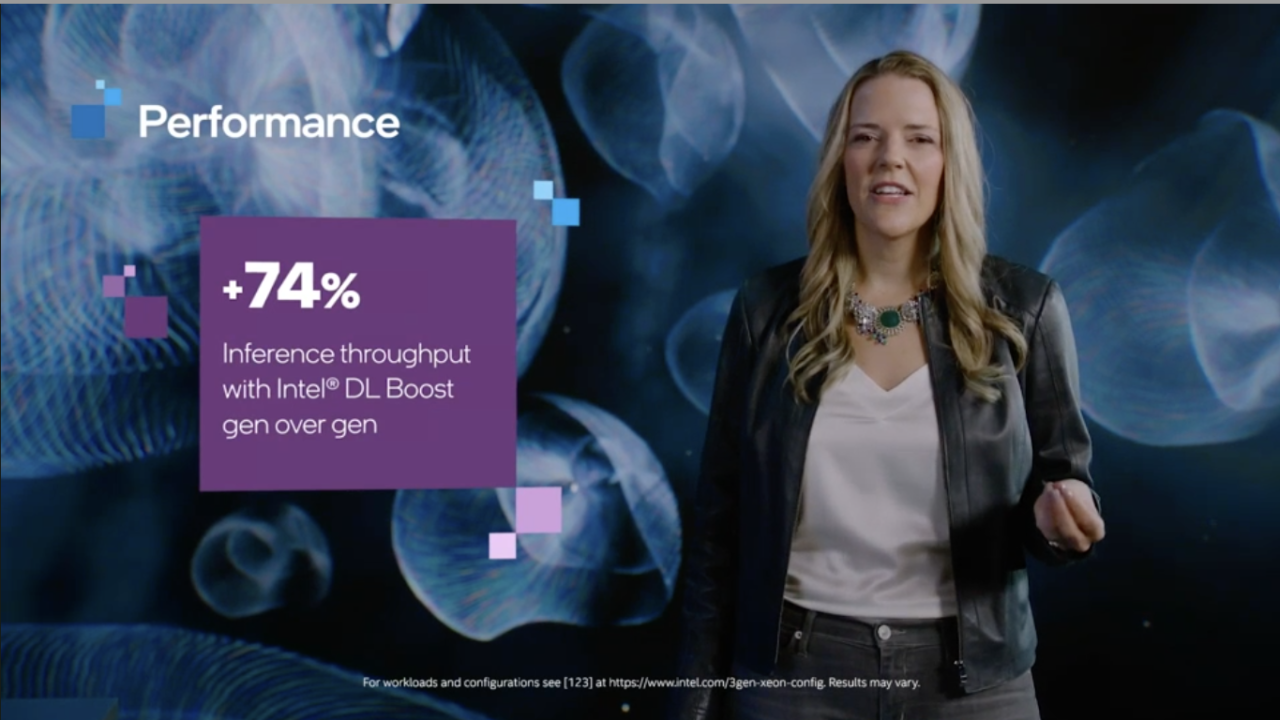 Analyst Take: There are two stories that are brewing concurrently out of the Intel Ice Lake launch that happened this morning. The first is an impressive generational improvement with a now more diverse Intel, focusing on flexibility and needed performance to meet user demand. The second is more of a performance and benchmarking narrative that is quickly coming to market as the tech media and analysts take the new 3rd generation Xeon Scalable processors for a test drive.

The first story is a great one for Intel, and it marks a good moment for the company, which has seen growing faith in recent weeks following its IDM 2.0 launch, the appointment of Pat Gelsinger, and now the launch of its newest data center CPU solutions.

The second story is benchmark-driven, and this is where all the major tech and media pubs are putting the new Ice Lake processors through their paces to see how they hold up against specific workloads and certain competitors. This is a more nuanced narrative for Intel as AMD has performed incredibly well in benchmarks and early indications from some of the tests seem to indicate that AMD is still ahead.

I’m not going to ignore the benchmarks, but I’m also not going to spend a lot of time trying to debate float points or optimal OpenSSL performance. Not because those things aren’t necessary, but there are a plethora of great sites to put eyes on those data points, and depending on the workloads and architecture of an individual enterprise, those things will be more or less critical.

The Ice Lake launch has been long awaited, and the performance updates will likely not surprise anyone. However, as I see it, the broad portfolio, along with the 46% performance increase from the previous generation mark an important moment for Intel to be able to address cloud and enterprise customers seeking improved performance from Intel. Over the past few years, especially while some of the product delays slowed Intel’s release of its newest process, I have been impressed by the diversification and focus on AI/ML and Security, which was an area that Intel saw a need for greater attention. These areas saw important improvements in the newest generation of processors, with continued DL Boost, SGX, and Crypto Acceleration enhancement. Robust benchmarks for AI performance against AMD and NVIDIA for popular workloads indicated a flexible level of performance that Intel should build upon.

Ice Lake marks an important moment for Intel as this generation has been long-awaited. The delays drew media and market ire that momentarily shifted the landscape for Intel and put AMD in a position to gain market share. With strong benchmarks and early indications that Ice Lake will provide ample competition to AMD’s newest variants while also delivering material improvement over prior generations. As I see it, the flexibility of the offering is a stand-out. Touting wins with all the major cloud providers while also addressing the operators and service providers at the network level and meeting the growing demand for edge makes for a complete platform, addressing the largest and most diverse clients and their needs.

Intel is About Balancing Ecosystem and Performance

Intel’s turning a corner. Not just with the release of its newest 3rd Generation Xeon, but with its commitments to continue to innovate to meet the ever-changing demands of the cloud, prem, and edge. The competition will continue to be tough. Not just from AMD, but from Arm as well. However, reports of Intel’s demise have been largely overstated. With 90% of the DC CPU market, Intel is now better positioned despite the delays and remarkable improvements from the competition than it has been in years to compete and win back/maintain its position. Furthermore, the company is now so much more than a CPU company. Its data-centric strategy has opened up the TAM to over $300 billion, addressing needs in AI/ML, network, memory, storage, and FPGAs. The business extends to the edge, and the company’s efforts have seen diversification to address 5G, IoT, Edge, and more. It’s a different Intel and the leadership of Pat Gelsinger along with the IDM 2.0 announcements that will impact manufacturing and extend the company’s presence in Foundry.

Overall Impressions of the Launch

This launch was well overdue for Intel, and people aren’t naïve to the delays. However, building chips is a complicated task, and Intel has overcome Ice Lake’s challenges and has reached the market.

As a whole, the 3rd Generation Xeon processors are robust and capable for a plethora of workloads. Versus prior generations, the new offerings deliver as expected, orders of magnitude better performance.

With the company seeking to meet many compute demands from the cloud to the edge, the Ice Lake lineup is a good balance of performance and flexibility. Built on top of Intel’s legacy in the data center and its significant market share, the company has a lot to feel good about. And sure, there will be naysayers, and there will be benchmarks that will outperform Intel’s new data center offerings. But across the board, meeting users’ dynamic needs while serving as a core partner to an ecosystem of cloud, operators, service providers, and enterprise will keep Intel deep in the game from now until their next wave of data center CPUs hit the market.