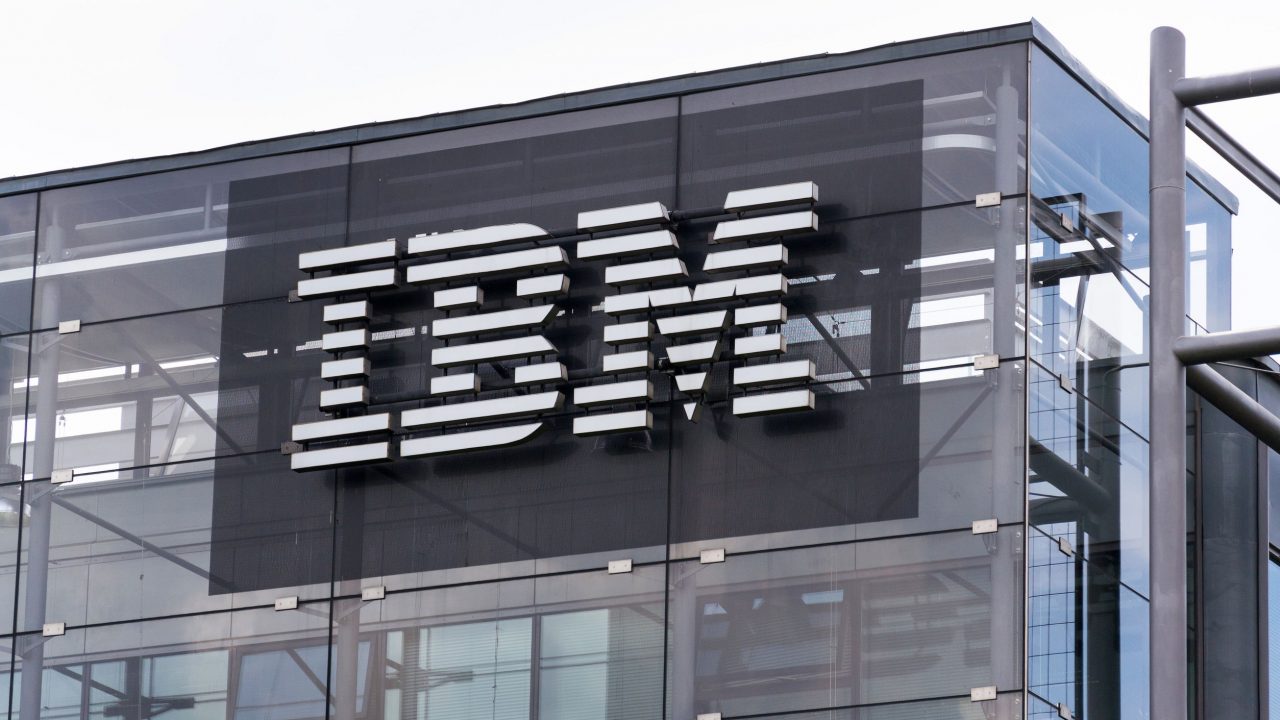 The News: IBM said Thursday it would spin off its IT infrastructure unit into a new publicly traded company to focus its legacy business more on cloud computing, a high-margin segment that has seen a boost as companies increasingly ramp up their digital shift.

Specifically, IBM will spin out the Managed Infrastructure Services unit of its Global Technology Services business into a new company, temporarily called NewCo, by the end of 2021. IBM said it will manage and modernize client-owned infrastructures, which it says is a $500 billion market opportunity. J.P. Morgan and Lazard are serving as financial advisors for the transaction. Read the full coverage on CNBC.

Analyst Take: Today’s news is material as IBM has been looking for the inflection point that will return the company to the growth trajectory that the market is looking for. When you are as diverse as IBM, you have a bit of a portfolio effect that can lead to stronger business units being offset by parts of the business that are growing slower or even contracting.

This is precisely what has been occurring at IBM, but in the wake of the $34 Billion Red Hat acquisition, there isn’t room for drag. Arvind Krishna was inserted as CEO to shake things up and that is what he is doing and at first glance I like what I see. 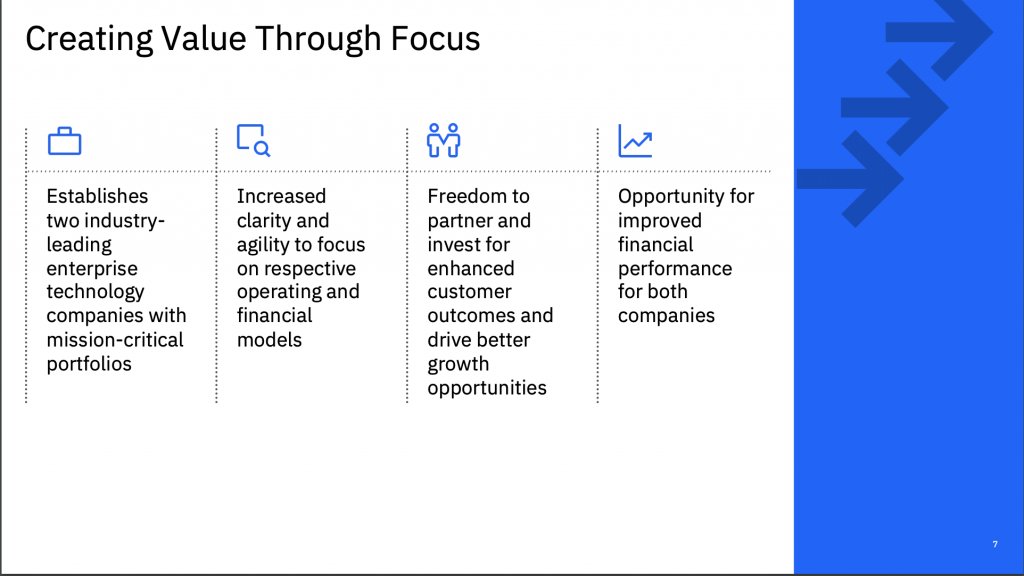 This morning I had the chance to speak with IBM President Jim Whitehurst who confirmed my initial take pointing out the strength of a more focused IBM. This is the key message that investors and tech analysts should be taking away. What will be left at the end of 2021 when this spin-off is complete is two companies that are better served both to their customers and the street because each will be more able to acutely focus on delivering based upon the potential of their offerings.

I have no doubt that investors will be elated with this news. The initial jump in the stock price is a visceral reaction, but overtime, if IBM can get back to consecutive quarters of growth and start to trigger growth rates that match some of the more exciting cloud and hyperscale players, the investors will almost certainly follow.

This also carries over to customers. The deeper level of focus will put more resources into deal making and winning. IBM can play in the cloud in numerous ways, especially with Red Hat at its disposal. This means not just winning deals for IBM Cloud, but being part of more equations that include competitive public clouds and deployments where Red Hat still plays a substantial role. 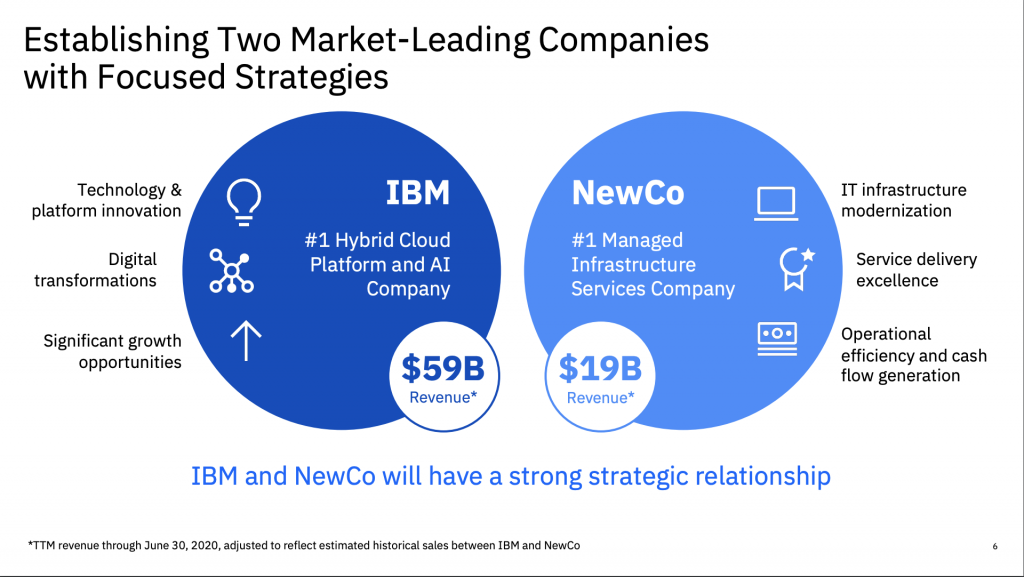 It is anticipated that this spin-off will be completed by the end of 2021. I see no reason this can’t be accomplished. The new IBM will be without a significant $19 Billion dollar run-rate business, but this will also be a significant growth opportunity as that business has struggled to consistently grow even in the single digits. That leaves the focal points on Watson, Quantum, Consulting and of course the IBM Cloud and Red Hat, which have been accelerants. Also, the systems business and the often highly profitable mainframe business will remain as it is material to the company’s hybrid strategy, especially its vertical offerings focused on security and compliance, which have significant market penetration in areas like financial services.

“NewCo,” as I see it, will finally have a chance to focus and grow. This business simply cannot be a focus of IBM today if steady or moreover double-digit growth is a desired outcome. It’s not a growing market, but that doesn’t make it unimportant. This business will be able to reset expectations and deliver an important set of IT infrastructure services and management capabilities that will be needed by enterprises for the foreseeable future. 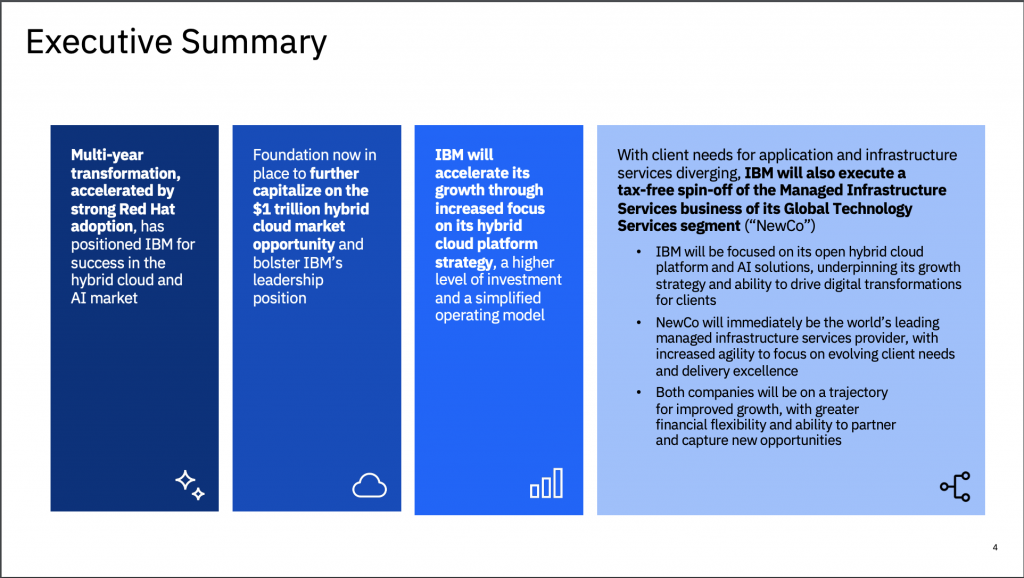 My initial response to this announcement was entirely positive. The company has struggled to recognize the rate of growth that investors demand and that industry analysts seek from companies in fast moving categories. As the company reflects–This is a trillion dollar market opportunity in the cloud. Focus isn’t an option here, and as I see it, neither is growth.

For IBM, the diversification, which often made the company stronger, had begun to cause a lag on its fastest growth areas. The $34 Billion invested in Red Hat has proven very quickly to be a sound investment as it has generated double digit growth AND made the company instantly more credible as a competitor and contributor in the hybrid cloud space. This is where IBM needs to put the vast majority of its chips if it seeks to meet the market where it is AND deliver on the growth rates that the market desires.

Spin-offs like this are always complicated. I don’t expect this one to be seamless either. I do believe the two companies will both be better served by having the attention required. IBM will lean into hybrid cloud along with AI, Quantum, Mainframe and Consulting to continue its diverse yet focused approach to modernizing the enterprise without the drag of the $19 billion dollar managed services business, which still has an opportunity to play a critical role in its respective space, but with a focus on steady controlled growth and return to its future shareholders.

I’m bullish on the move. It’s imperfect, but M&A is never anything but. IBM is better for it as is the “NewCo.”