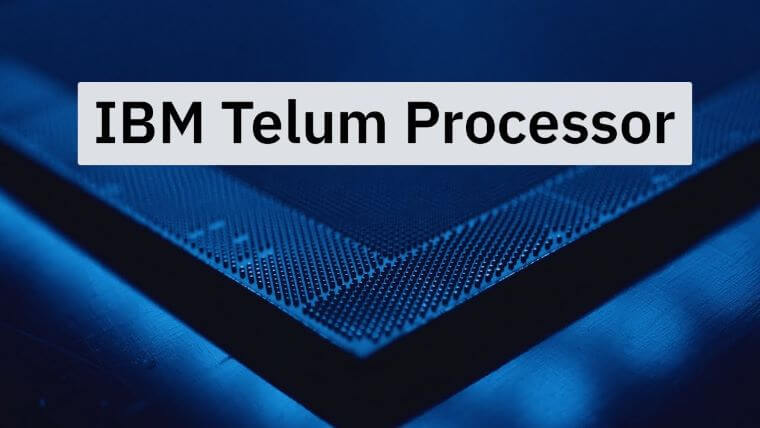 Analyst Take: In a break from over 50-years of tradition IBM, today announced at the Hot Chips conference the new Telum processor it will use in the next generation of its Mainframe systems. Since 1964 IBM has announced the latest Z processor as part of the overall system announcement. As recently as September 12th, 2019, when IBM launched the z15, the processor and system were launched simultaneously. Following the footsteps of the POWER 10 processor announcement in August last year and the more recent 2nm announcement from IBM Research, IBM is now keen for the broader market to see IBM as a leader in processor design and not just a provider of systems.

As IBM tries to position itself in the processor space and no doubt garner some of the reflective glow that follows the likes of NVIDIA, AMD, ARM, and Intel, we need to explore why. First of all, chips are hot right now and front-page news. With the recent supply chain shortages, chips are part of the mainstream media narrative; therefore, IBM positioning itself as rolling with the processor design crowd is good for the overall buzz around IBM. However, we also need to look deeper. As the global supply chain starts to bifurcate and the US government looks to offer grants and funding to US-based processor design and manufacturing companies, IBM will be lobbying to get in on the action. Therefore, this Telum announcement warrants analysis through multiple lenses; messaging to the stock market, positioning IBM as innovative to their end customers, and signaling to the US government around IBM as a US supplier of next-generation processor technology.

Now that the backstory is out of the way let’s dive into what IBM has launched and why it is significant. Fraud and the detection of fraud is a considerable overhead for the financial system and, in particular, the payment providers and banks. Fraud and the costs to track and minimize it ultimately lead to increased costs to the end consumer via higher prices. Therefore any innovations that can reduce fraud, detect it faster or remove friction in the approval process of a financial transaction is big news.

Analytics on transactions today is a process that goes on post-transaction. While the time-lapse decreases as the overall architecture improves and the speed of analytics increases, it is still crucial after the transaction is approved. The holy grail is to apply fraud analytics while the transaction is being approved, not after. This process, which is often referred to as ‘analytics at the point of impact,’ is what IBM is launching today is a processor design that endeavors to address this requirement and allow complex analytical workloads to be performed simultaneously as the transactional workflow is in the processor.

Through an innovative centralized design, IBM is positioning the processor as allowing clients to leverage the full power of the AI processor for AI-specific workloads, making it ideal for financial services workloads like real-time fraud detection during a credit card transaction.

The new Telum processor is positioned to enhance existing rules-based fraud detection or use machine learning. IBM Z’s AI strategy is to support a wide variety of open source frameworks and tooling such as Tensor flow, pytorch and Anaconda. With this announce IBM’s is going to continue that strategy. IBM’s push is to meet their customers on their AI journey and have them bring their investment along .

It will be interesting to see as IBM gets closer to announcing the systems that will run this new processor in the first half of 2022 timeframe what the software exploitation strategy is for these new processor capabilities. For instance, Anaconda is available on z/OS natively today as part of IBM’s Open Data Analytics for z/OS offering. In addition, IBM have zCX TensorFlow Container images available in the IBM Container Registry. IBM continues to add open source AI frameworks to z/OS via zCX container images. I expect to see more from IBM on this topic when the zNext machine gets launched in the first half of 2022.

Telum is IBM’s first chip with technology created by IBM’s Z team and IBM Research. The processor will be produced in collaboration with Samsung who are IBM’s technology development partner for the Telum processor following a transition from a relationship with Global Foundries.

Telum adds a new integrated AI accelerator with more than 6 TFLOPs compute capacity per chip. Every core has access to this accelerator and can dynamically leverage the full compute capacity to minimize inference latency. Telum is designed to enable low latency inference for response-time sensitive workloads through the centralized accelerator architecture with direct connection to the cache infrastructure. With planned system support for up to 200 TFLOPs, the AI acceleration is also designed to scale up to the requirements of the most demanding transactional workloads.

Details of the exact technical specifications were sparse in the press release and supporting blog post from IBM. Still, we found it interesting that the Telum processor features innovations in transparent encryption of main memory and that Secure Execution improvements are designed to provide increased performance and usability. These improvements will manifest themselves not only in the next generation of mainframe machines and high-end Linux-only machines called LinuxONE but also in IBM’s public cloud capabilities. IBM public cloud leverages the current z15 generation of processors found in the LinuxONE range of servers to deliver the Hyper Protect range of public cloud services. IBM did not provide any details in the press release or supporting materials, but we would not be surprised if we see the latest Telum innovations find their way into the Hyper Protect range of public cloud services in due course.

Future is Bright for Mainframe

While headlines continue to talk about broad migration to the public cloud, nearly 80% of workloads remain on-premises. The latest Telum announcement IBM signals that custom silicon is still in demand for mission-critical workloads with unique and differing needs.

With this latest processor design, IBM is building on a history of purpose-built embedded accelerators designed to improve the performance of everyday tasks like cryptography, compression, and sorting. The Telum processor will enable customers to leverage the results of AI inference to control the outcome of transactions better before they complete and provide enhanced security functionality such as Trusted Execution Environments and enclaves with reduced processor overhead. Both of which sound like innovations the industry needs both today and going forward.

GlobalFoundries Files For An IPO, But Don’t Rule Intel Out Just Yet