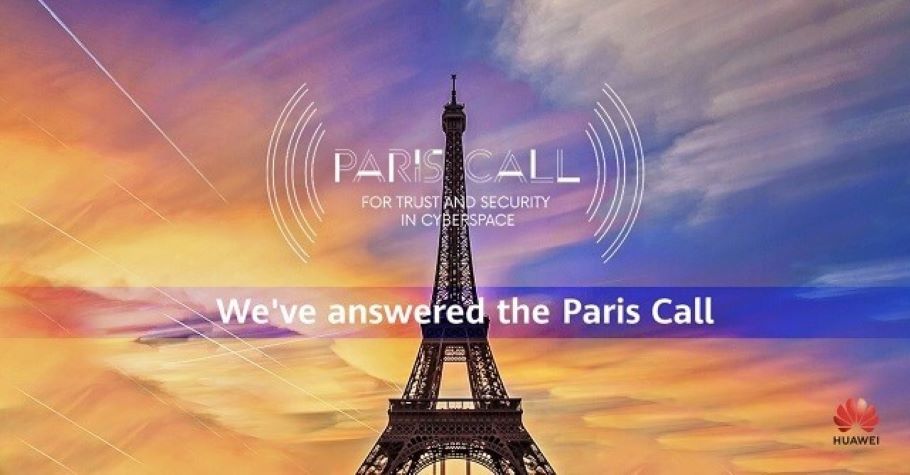 Last week Huawei Technologies joined the Paris Call Initiative, a declaration aimed at spurring collective action toward securing cyberspace. Launched by the French government in November 2018, the Paris Call (i.e., Paris Call for Trust and Security in Cyberspace), is a declaration of commitment to work collaboratively on one of the world’s most challenging issues. Members work together to make digital products more secure, strengthen collective defenses against cybercrime, and promote cooperation among stakeholders across national borders. They also pledge adherence to international norms of responsible behavior in cyber space.

In becoming a Paris Call member, Huawei joins 564 other entities that have made a public commitment to fortifying the security of digital products and digital systems. The group’s members include 67 states, 139 international and civil society organizations, and 358 private-sector companies.

Joining Paris Call is a No-Brainer for Huawei

Analyst Take: Huawei simply needed to join the Paris Call to burnish its international cybersecurity credentials. This summer Huawei already indicated the company’s revenue will be $30 billion less than forecast over the next two years due to the U.S. government’s ban on its equipment and the ongoing trade tussle with China. In becoming a Paris Call member, Huawei joins 564 other entities that have made a public commitment to fortifying the security of digital products and digital systems. The group’s members now include 67 states, 139 international and civil society organizations, and 358 private-sector companies.

Among the 67 states are all the EU members, giving the Paris Call vital international clout. However, the U.S., Russia, and China have not joined the initiative, somewhat dashing Huawei’s objective to use Paris Call membership to counter the U.S. government’s campaign to exclude Huawei equipment within 5G networks, especially among allies. Australia, New Zealand, and Japan, for example, have already banned Huawei equipment from their 5G networks. Regardless, almost all EU members have indicated they will work with Huawei in building out 5G networks, with the proviso of many members tightening network security regulations in order to avoid delays of up to 18 months as well as adding costs of up to $55 billion in 5G deployments.

By joining, Huawei is ardently committing to the universal adoption of objective testing and verification for all technology vendors. Huawei views reliance on objective third-party standards in testing the security of technology supplied by any vendor as critical to enabling fact-based decisions about cybersecurity, providing an additional layer of assurance to governments and operators with national security concerns.

On the other hand, Huawei needs to continue proactively addressing the recent report from U.S. security outfit Finite State, which stipulates that Huawei devices are less secure than comparable devices from other vendors. This includes pointing out that none of the Huawei products tested by Finite State will be deployed in operator 5G RAN or Core networks and older versions of Huawei software were tested, which did not include security patches implemented subsequently. In addition, Finite State used a binary image analysis tool, which is suitable for certain narrow security applications but cannot provide a complete picture of security vulnerabilities in the products tested.

Beyond implementing airtight cybersecurity testing protocols, the U.S. account against Huawei also includes the company’s purported ties with the Chinese authorities. These ties include national security and intelligence collection, subsidies and soft loans, access to closed state procurements and the robust support of the government in promoting exports and upholding Huawei’s market position. So a cybersecurity clean bill of health from a Paris Call Initiative-sanctioned entity may not end up canceling out these other concerns.

Slack Comes Up Short With Its New Security Announcements