Dell Tech’s Q3 Results: A Deep Dive Into This Quarter And What’s Ahead 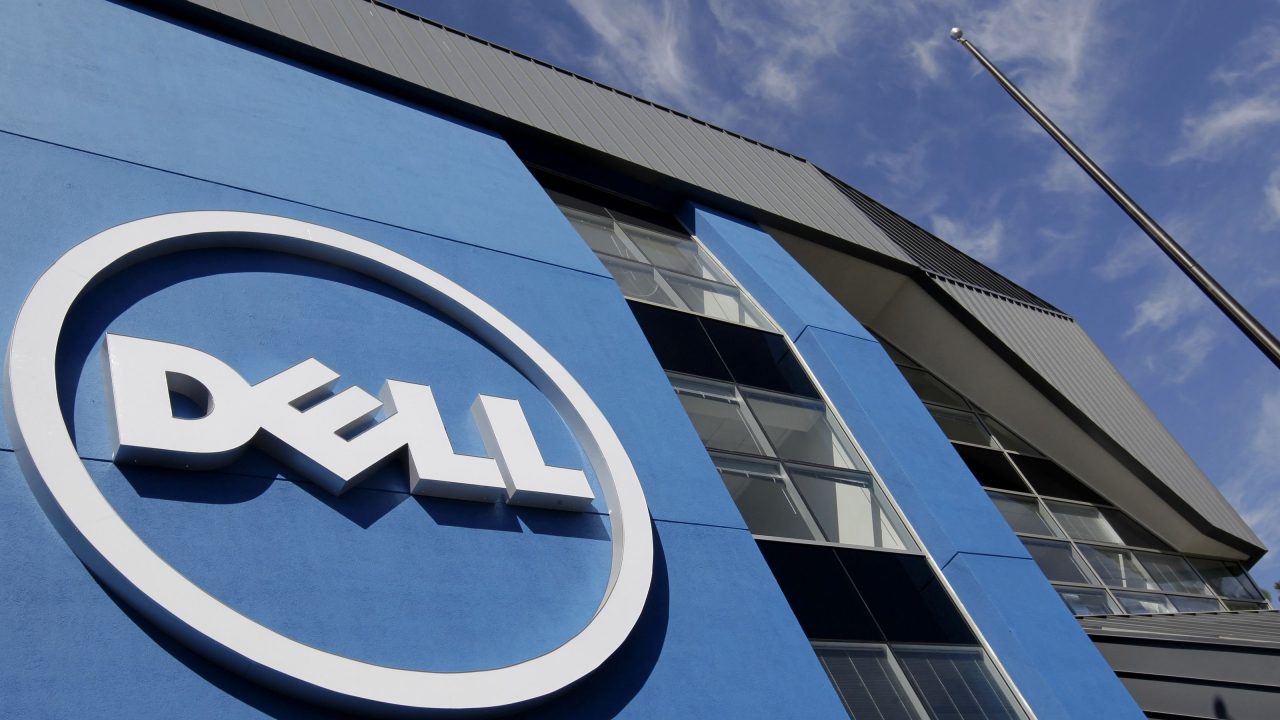 The News: Dell Technologies (NYSE: DELL) announces financial results for its fiscal 2020 third quarter.  Third quarter revenue was $22.8 billion, up 2 percent, and non-GAAP revenue was $22.9 billion, up 1 percent over the same period last year.  Operating income was $836 million1 compared to an operating loss of $356 million last year, and non-GAAP operating income was up 18 percent to $2.4 billion.  Net income was $552 million or 2.4 percent of revenue, non-GAAP net income was $1.4 billion or 6.3 percent of non-GAAP revenue, and adjusted EBITDA was $2.9 billion or 12.5 percent of non-GAAP revenue.  Cash flow from operations was $1.8 billion.  Diluted earnings per share was $0.66 and non-GAAP diluted earnings per share was $1.75. Read the full Earnings press release from Dell.

Analyst Take: Dell Technology continues an overall solid run of form with its third quarter earnings report which was mostly good, despite the slight revenue shortfall. This report certainly should provide a level of confidence to the market as well as Dell’s employees and user community, however, some of the forward looking guidance requires pause and deeper reflection. Let’s take it from the top.

For the quarter, Dell showed a solid overall position as it came up a bit shy on revenue while outperforming the market’s EPS expectations for the company. For revenue, the company great 1% YoY to $22.9B but analysts had targeted $23.04B representing a $140M shortfall. With analysts indicating earnings for the quarter at around $1.61 ahead of reporting, the company came in at $1.75 beating by almost $.14 per share. This particular earnings beat can be attributed to sound management, especially in operating margins which have continued to creep upward. Also, it is worth noting versus one year ago, where the company was seeing operating losses, the operating income for the quarter on a non-GAAP basis was $836M.

Given the company’s massive size and distributed businesses, the overall performance was solid, but there were certainly bigger wins in certain areas along with some business units that missed or saw contraction.

Client Solutions Group – Client solutions grew overall by 5% with commercial sales up 9% delivering continued growth after last quarters record numbers. Consumer revenue was down 6% and while it was certainly a little bit off, this is an area of low concern for me as Dell’s CSG demand and overall growth is largely driven by commercial. The performance of CSG was very good delivering $982 Million in operating income for the quarter.

Infrastructure Solutions Group – This came in a bit off the pace with a 6% YoY drop on $8.4 Billion in revenue. The decline is a little bit concerning, but I remain solid in my position that the company’s strategy here is sound. Dell Technologies Cloud is in its infancy and its hooks into VMware provide optimism for the future. Storage, which the company maintains a #1 position in enterprise (29.9%) was up 7% YoY should also see growth. Servers and networking tumbled a bit showing a 16% fall from a year ago. HPE and Cisco noted longer sales cycles and Dell is also saying the same things. Enterprise sales cycles can run longer with big infrastructure investments compared with PC refreshes and other shorter term IT spend. I  still expect to see a bounce back over the next 2-3 quarters but volatility will likely remain part of this BU, especially with extended sales cycles, global trade uncertainties and potential chip supply shortages, which have been a bigger problem for client but could impact servers as well.

A Busy Quarter of Announcements

During the quarter, Dell made several product announcements and enhancements to its current solution portfolio. Most notably its DellEMC PowerOne Autonomous Infrastructure. The Dell EMC PowerOne autonomous infrastructure is designed to make deploying, managing and consuming IT easier for organizations. PowerOne integrates PowerEdge compute, PowerMax storage, PowerSwitch networking and VMware virtualization into a single system combined with a built-in intelligence engine to automate thousands of manual steps over its lifecycle.

Another big announcement was around its “On Demand” services, bringing public cloud like consumption to an array of dell offerings from client to the data center. This will be another area to watch. For more on the announcements check out my coverage on Network World and here on Futurum. 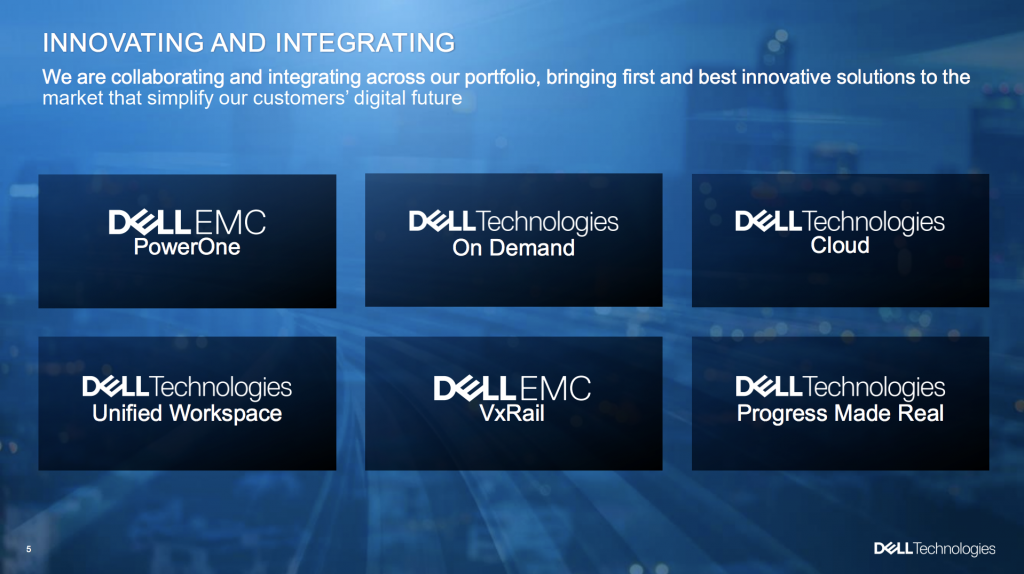 Dell Technologies has seen growth come from significant acquisitions. VMware has been the most notable, albeit its technically a stand alone company held at ~81% by Dell Tech.  For this quarter alone VMware delivered over $717 Million in Operating Income. Dell Technologies has also seen growth from its smaller acquisitions including Pivotal, Secureworks, RSA, Virtustream and Boomi as those businesses saw a 10% YoY growth reaching $644M.

I also believe the ability to incorporate these services into Dell’s consumption based solution portfolio will notable in the next two years. The extended portfolio give deep capabilities in security and cloud migration, which are key focuses for enterprise tech transformation. 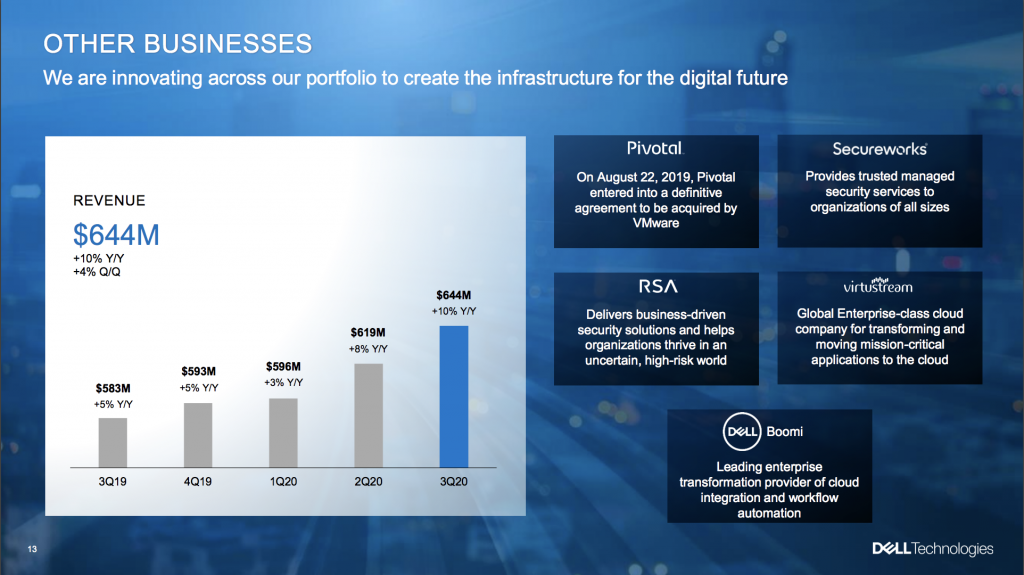 Based upon the company’s strong performance and income this year, Dell Technologies intends to deleverage by as much as $5.0 Billion for the year and was able to pay down $2.0 Billion last quarter and another 1.1 billion during the current quarter. Those numbers serve as a strong indicator of the company’s continued confidence. Deleveraging will also put the company in a good position to look at future acquisitions if and when the right opportunity arises. 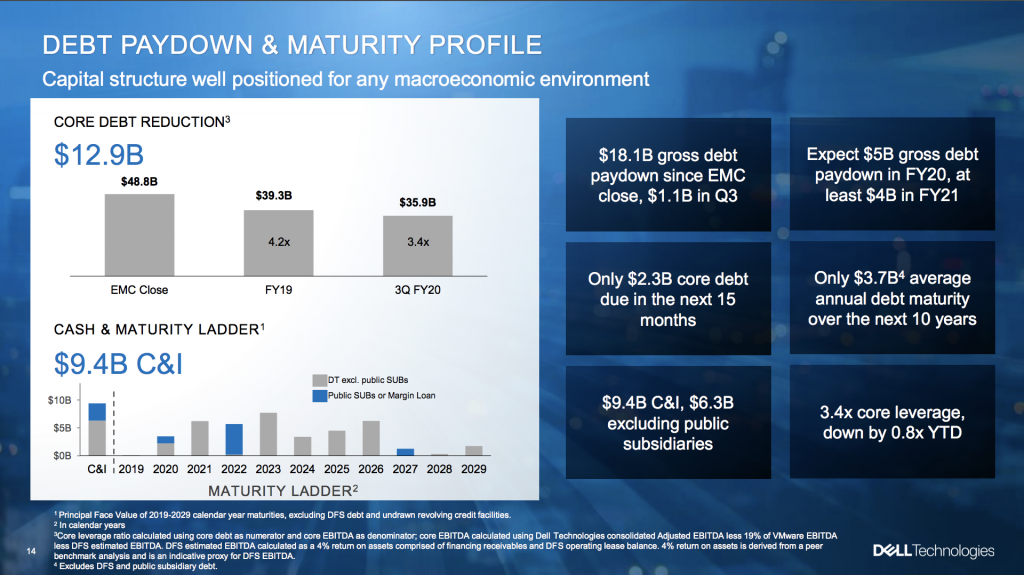 Guidance Tells a Cautionary Tale, But, the Future Looks Bright

Continued shortages of Intel Chips seemed to put a bit of a damper on the company’s forward looking guidance, which the company cut from a range of $92.7B – $94.2B down to $91.5B – $92.2B. Dell isn’t the only company that has cited the shortage as it has been mentioned in Intel’s own comments and was reiterated in recent earnings from HP, the world’s second largest supplier of PC’s.

Beyond the chip shortages, another reason for Dell to be cautious with its forward looking guidance is the ongoing uncertainty in China. Cisco, HPE and other OEMs have had similar comments as the unknown continues to put caution to large tech suppliers. A resolution could see Dell having a stronger than expected upcoming quarter, while a trade setback could be problematic for not just Dell, but the whole tech industry which teeters in the balance as it waits for resolution.

Another concern that has loomed over Dell Tech has been the massive leverage that the company had to create in the EMC Merger-Acquisition, but based upon the company’s actions this quarter it appears that the most levered times are behind it. Having said that, through diversification and commitment to its enterprise business the company has found itself sitting on top of an impressive number of areas (note graphic below) in infrastructure, storage, Hyperconverged, server, client and more.

VMware, which saw 11% YoY growth and completed its acquisition of Carbon Black this quarter, has continued to be important  as the company continues to be the dominant platform for hybridizing virtualized environments. The company’s technology is core to Dell’s inroads to hybrid cloud including its PowerOne and Dell Tech as a Service announcements this quarter.

There is a lot to like about Dell Technologies right now. Quietly, the company continues racking up the wins and this quarter’s results are no exception as the company has maintained and/or extended its lead in many key enterprise technology categories for infrastructure, storage, hyperconverged (HCI), Server, Commercial Client and Monitors. 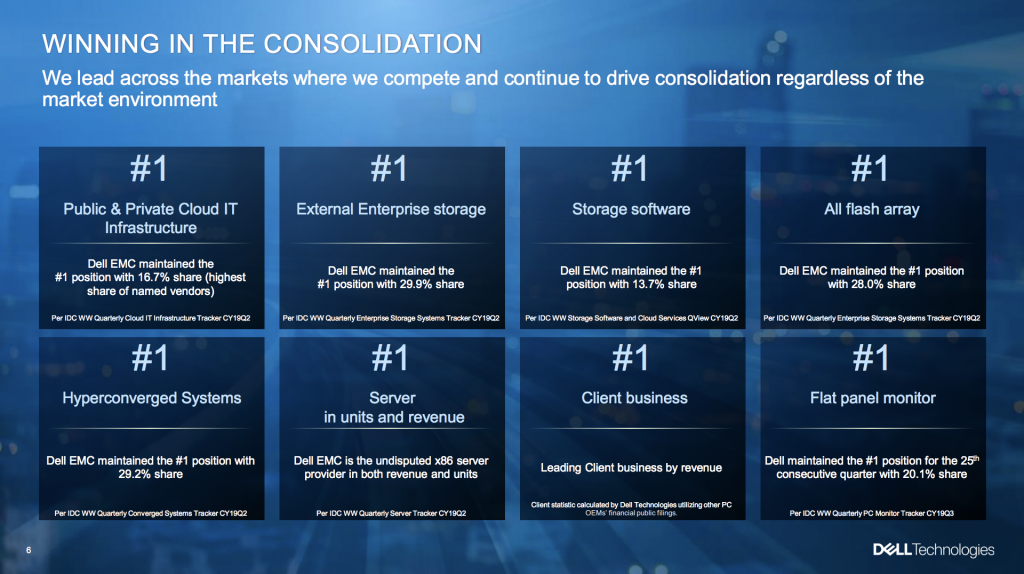