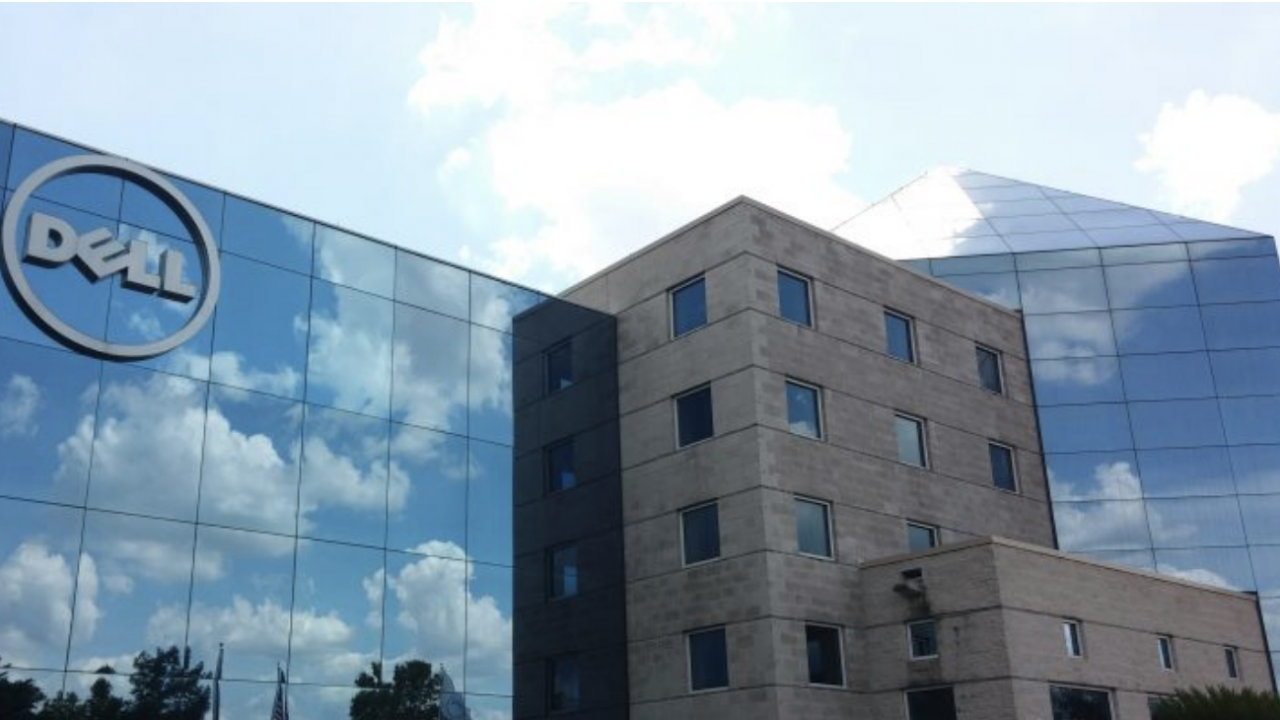 The News: Dell (NYSE:DELL) earnings for the tech company’s fourth quarter of 2019 have DELL stock unmoving after markets closed Thursday. This follows adjusted earnings per share (EPS) of $2.00, which misses Wall Street’s $2.02 estimate. However, revenue of $24.03 billion is just above Wall Street’s estimate of $24 billion. Adjusted EPS for the quarter is up 7.53% from $1.86 during the same time last year.Here’s what else is worth noting from the most recent Dell earnings report. 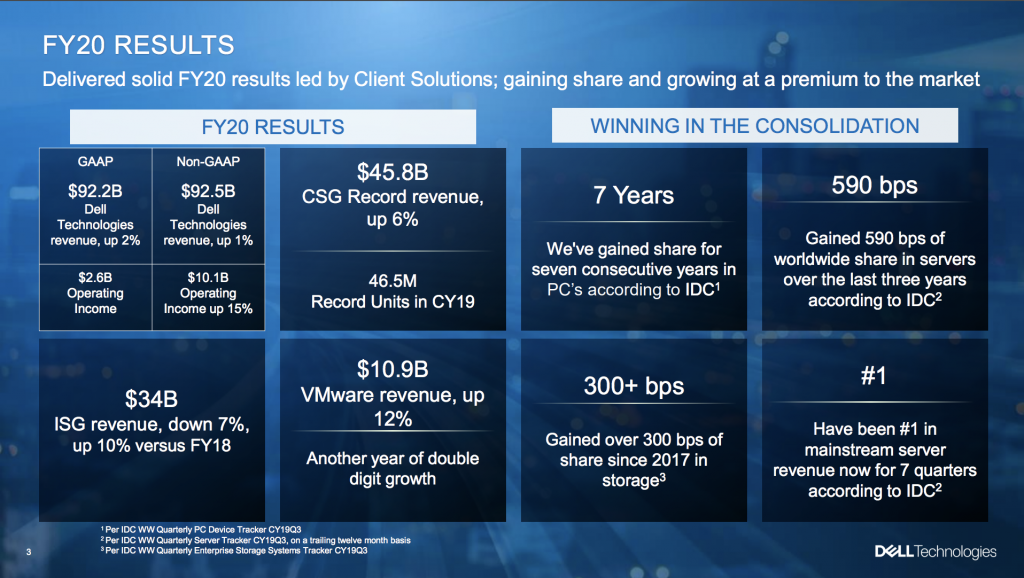 Analyst Take: Dell Technologies continues an overall solid run of form with its fourth quarter earnings report which was mostly good, despite the slight earnings shortfall. This report certainly should provide a level of confidence to the market as well as Dell’s employees and user community, however, some of the forward looking guidance requires pause and deeper reflection. Let’s take it from the top.

For the quarter, Dell showed a solid overall position as it came up above expectations on revenue while missing the market’s EPS expectations for the company just slightly. For revenue, the company great 1% YoY to $22.9B but analysts had targeted $24.1B representing a small margin above expectations at $24.0 Billion. With analysts indicating earnings for the quarter at around $2.02 ahead of reporting, the company came in at $2.00 falling short by just $.02 per share. This particular revenue beat can be attributed to sound operational practices that dealt with product shortages and other headwinds that were discussed during Q3’s results. It is also good to see gross margin up 4% to $8.4 Billion, which has shown a sound mix of pricing, purchasing power and product mix enhancements that are improving the critical results at the bottom line.

Given the company’s massive size and distributed businesses, the overall performance was solid, but there were certainly bigger wins in certain areas along with some business units that missed or saw contraction. The company provided the following highlights of its performance in two key areas focusing on Client and Infrastructure. Client continued to see growth driven by its efforts in commercial. This is impressive as PC competition is on the rise and challenges like chip shortages have been evident in numbers throughout the last fiscal year.

Client Solutions Group revenue for the fourth quarter was $11.8 billion, up 8 percent year over year. This was driven by $8.6 billion in commercial revenue, a 10 percent increase, and $3.2 billion in consumer revenue, a 4 percent increase. Operating income was $624 million or approximately 5 percent of Client Solutions Group revenue. For the full year, the Client Solutions Group delivered record revenue of $45.8 billion, up 6 percent versus the prior year, with commercial up 11 percent. Client Solutions Group full year operating income was $3.1 billion. 3 Key highlights: • Shipped a record 46.5 million units during the 2019 calendar year1 • Gained PC unit share for the last seven years in a row1 • Achieved double-digit unit and revenue growth in commercial desktops and workstations, completing a full fiscal year of quarterly double-digit growth in the segment

Infrastructure will be an area to pay attention to. Dell’s major bets are on infrastructure but the growth has been hard to come by despite the company continuing to lead in major infrastructure categories in Server, Storage, and Hyperconverged Infrastructure. I would like to see growth return in FY 21, but with investments in more services, which will mean a shift from some hardware purchases to subscriptions, I will also be keeping an eye on margin and adoption of those higher margin services.

Infrastructure Solutions Group revenue for the fourth quarter was $8.8 billion, down 11 percent. Storage revenue was $4.5 billion, down 3 percent, while servers and networking revenue was $4.3 billion, down 19 percent. Operating income for the group was $1.1 billion or approximately 13 percent of revenue. Revenue for full fiscal 2020 was $34.0 billion, with operating income of $4.0 billion. Key highlights: • Gained 590 basis points of mainstream server revenue share over the last 3 years, and have been the #1 worldwide provider for 7 quarters2 • Strong customer traction with our co-engineered ‟first and best” solutions, including Dell Technologies Cloud, Unified Workspace, VxRail and smart fabric director • Announced the latest advancements to Dell Technologies Cloud, including a new subscription-based model that makes it easier for customers to accelerate hybrid cloud deployments and simplify IT operations

Dell Technologies has seen growth come from significant acquisitions. VMware has been the most notable, albeit its technically a stand alone company held at ~81% by Dell Tech.  For this quarter alone VMware delivered an impressive $1.0 Billion in Operating Income. Dell Technologies has also seen growth from its smaller acquisitions including Secureworks, RSA, Virtustream and Boomi as those businesses saw a 10% YoY growth reaching $477M. 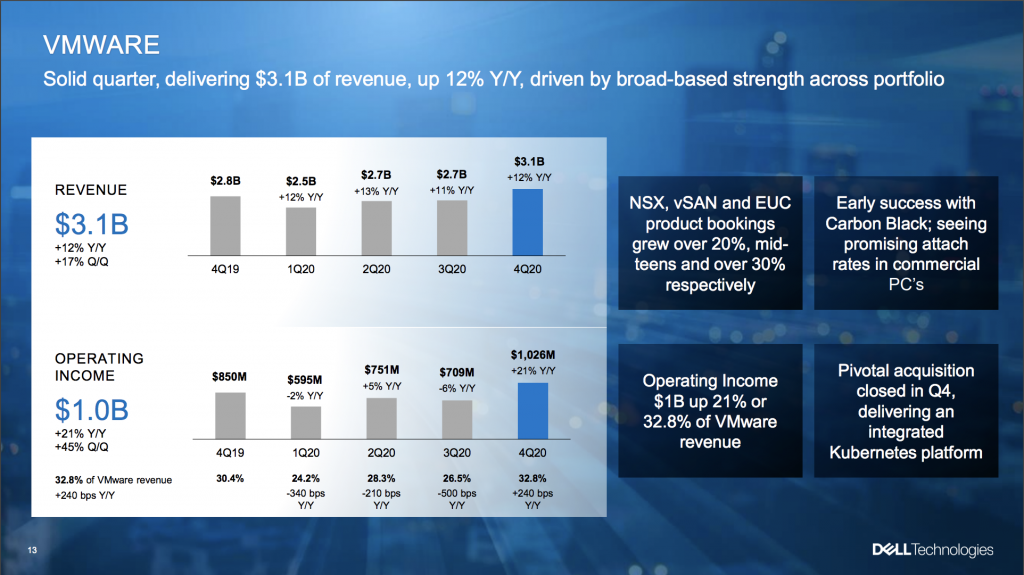 One of the biggest contributions I see from the broad diversification and acquisition strategy has been cross-selling. While numbers for this have been hard to come by, I believe that the vastness of the portfolio certainly keeps Dell Tech’s portfolio of company’s engaged with a broad landscape of customers, including many where VMware or others maintain a relationship even if the main business, DellEMC isn’t well represented. This should serve the company well in the long term as cross-selling and growth in business attach rates will be important for the company to hit revenue growth targets.

I also believe the ability to incorporate these services into Dell’s consumption based solution portfolio (Dell Tech On Demand) will be notable in the next two years. It’s still early days for Dell’s new consumption based on-prem services, but early indications from the broader market as well as within Dell’s early customer acquisitions are encouraging.  The extended portfolio give deep capabilities in security and cloud migration, which are key focuses for enterprise tech transformation. 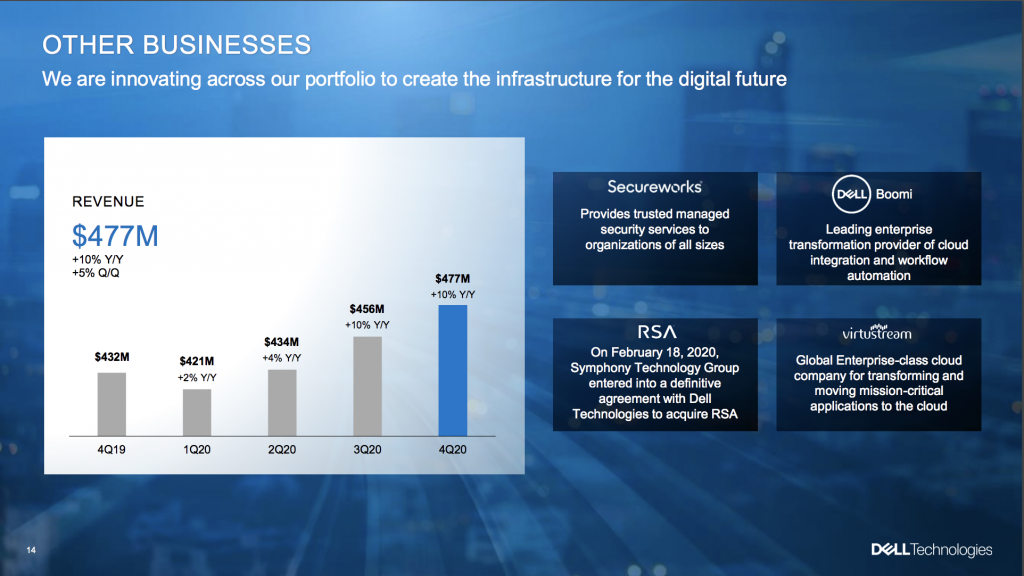 Based upon the company’s strong performance and income this year, Dell Technologies deleveraged by more than $5.0 Billion for the year (FY 20) and was able to pay down $1.5 Billion during the current quarter. Those numbers serve as a strong indicator of the company’s continued confidence in future cash flows and margin performance. I continue to think that deleveraging will also put the company in a good position to engage in future acquisitions if and when the right opportunity arises.

Going forward Dell Tech is committing to continuing to reduce debt in the new fiscal year with ~$5.5 Billion being the projected pay down. This is an important area to keep tabs on. 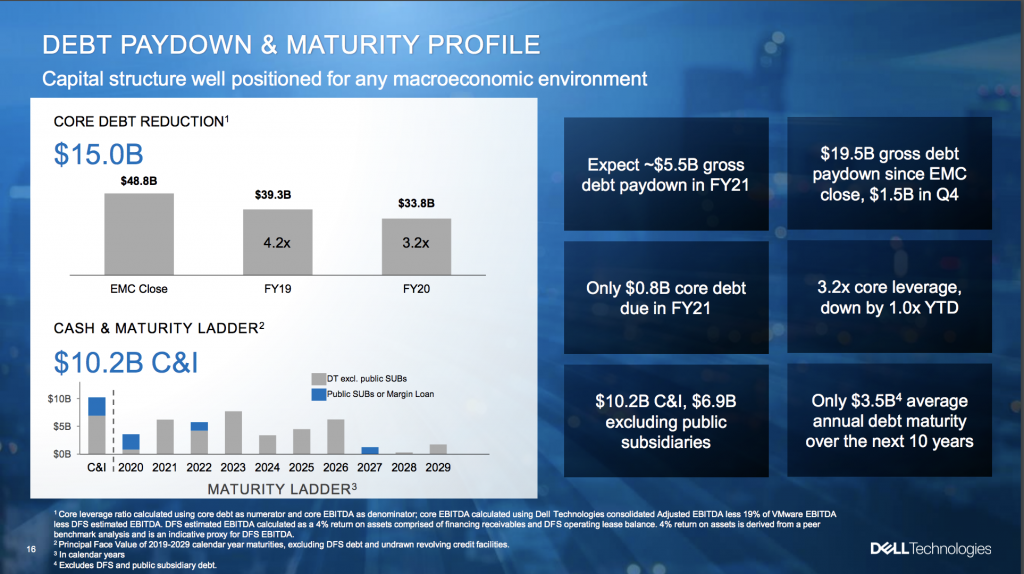 Stock Buyback Program Indicates the Company Believes there is Growth Ahead

The company also announced today a new share repurchase program of up to $1 billion over the next 24 months, starting immediately. I thought this was a good sign that the company is confidence there is still value in the price of the stock and is showing confidence in its future outlook.  The company did point out that de-levering will continue to be the primary capital allocation goal going forward. I believe this approach is an important part of continuing to create value for shareholders. 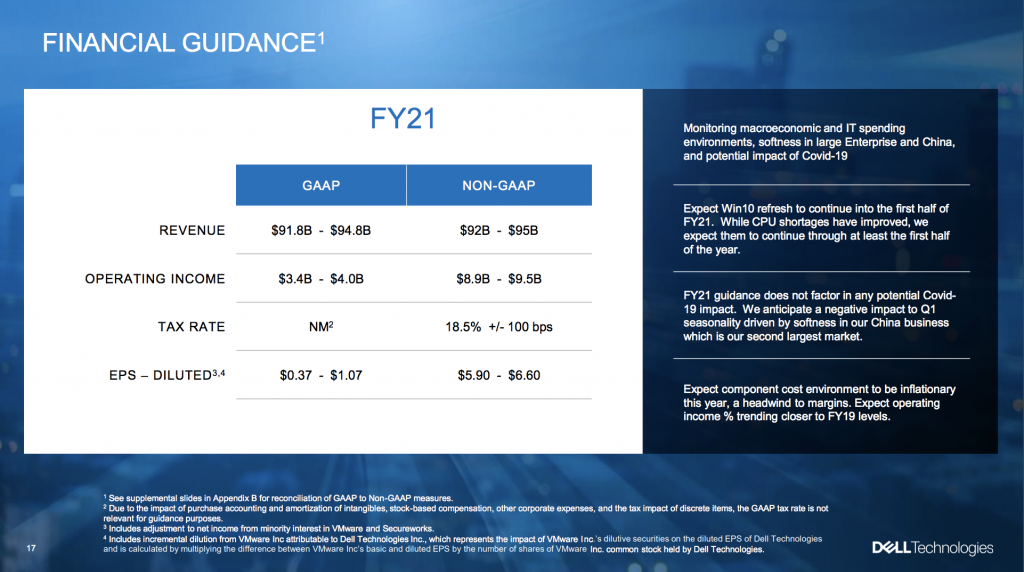 Of course the street would be watching closely to hear what the forward looking guidance would be for FY21. With about 3% growth for revenue and a somewhat flat operating income number being laid out, I believe this shows enough ambition considering some of the headwinds like China both from a supply, trade and now pandemic standpoint with the continued uncertainty around COVID-19.

I’ve marked Dell’s growth as more steady rather than exponential, but the portfolio is complete and the company has kept a lead in many of the markets it competes, which are important investment areas for enterprise as areas like cloud and big data continue to proliferate. There are certainly some challenging times ahead with Dell reporting on the worst performing day in history for the DJIA, but there are also a lot of successes that the company can point to and as it closes in on $100 Billion in revenue, its FY 2021 should be a very interesting and exciting to watch. 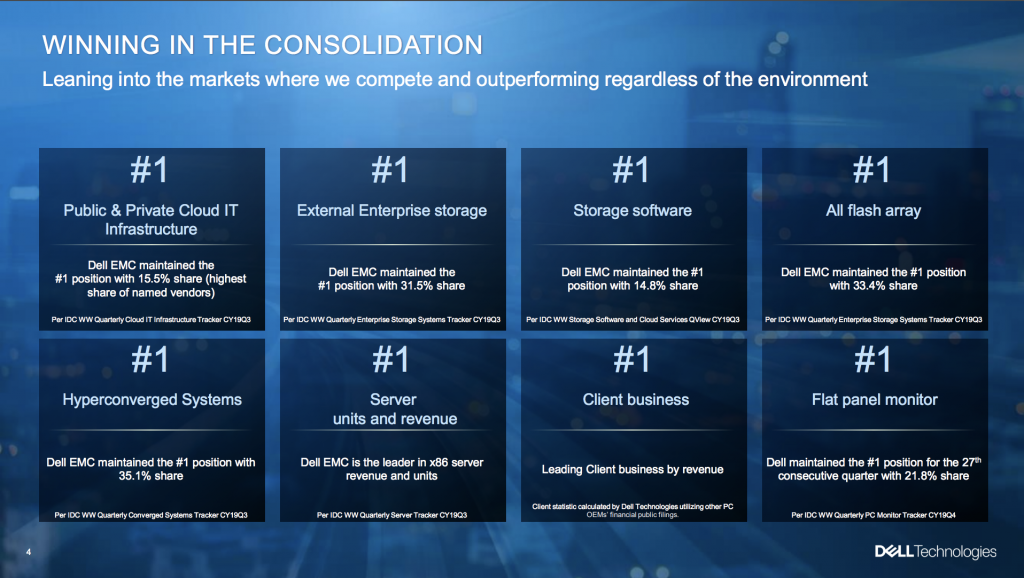 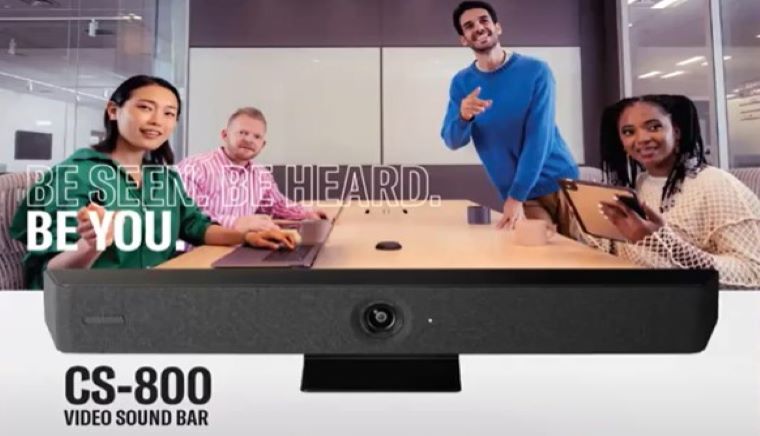 Lumen Sells EMEA Assets to Colt for $1.8B — The Driver Behind That Move and a Look at What’s Ahead for the Company Now 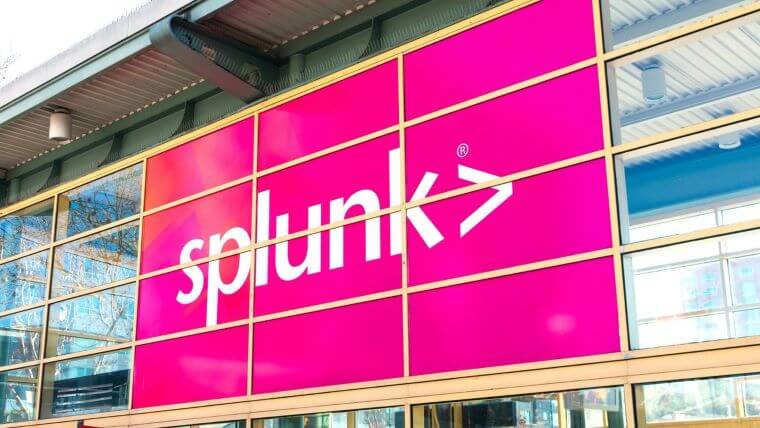