Cisco Outperforms in Q1, Predicting an Even Better Q2 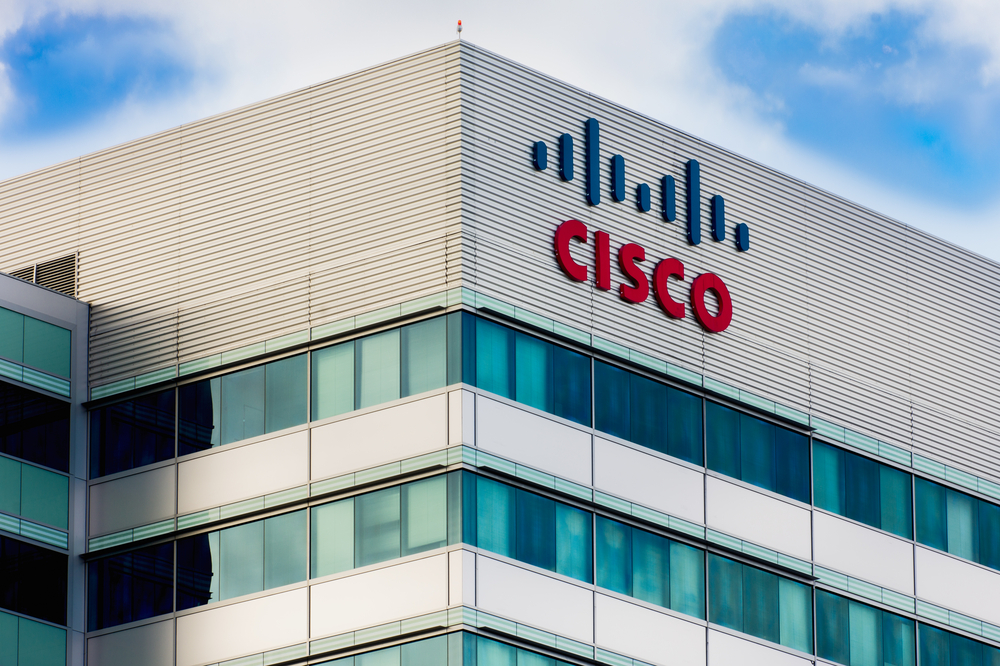 The News: Cisco shares moved as much as 9% higher in extended trading on Thursday after the company reported fiscal first-quarter earnings and an upbeat forecast that exceeded analysts’ expectations.

With respect to guidance, Cisco said it sees 74 cents to 76 cents in adjusted per share and a 2% revenue decline to flat revenue in the fiscal second quarter. Analysts polled by Refinitiv had expected 73 cents in adjusted earnings per share and $11.63 billion in revenue, which implies a 3% revenue decline for the period. Read the full news piece on CNBC.

Analyst Take: Cisco had eyes on it as it announced today. Given its diverse business spanning networking, security, and most enterprise IT, seeing a strong performance in its fiscal Q1 was exactly what analysts were hoping for. Cisco is a bell-weather for technology. With large swaths of its business serving industries that were hardest hit by the pandemic, not to mention some challenging geopolitical and supply chain issues, there were reasons to be concerned. However, Cisco didn’t flinch, and the company turned in an encouraging first fiscal quarter.

While this quarter’s guidance was softer YoY, the circumstances for 2020 more than made up for that slight pullback, the company estimated a revenue decrease of 10% and an earnings pullback (non-GAAP) about the same. This made an outperform even more critical, and I was glad to see the company gain solid footing.

Perhaps more positive was the guidance going forward, where the company shared an expectation of flat to 2% down year over year. This may seem a bit cautious, but given this quarter’s target was outshooting a 10% decline, this is a sign of strength and ambition for the company. I would like to see growth in the next quarter, but this is a walk, jog, run acceleration. If Cisco again outperforms its guidance, it should see slight growth in this quarter. Presuming no major economic halts, which are still possible, momentum could build toward high single digits, which is where I would like to see its growth stabilize.

Lastly, the company presented its CFO transition plan today, naming software veteran and recent Autodesk executive Scott Herren to the role. The company should instantly benefit from adding a strategic layer back into Chuck Robbins team.

The Drivers of this Quarter’s Performance

As I mentioned above, this quarter has more positives than negatives. Still, the external environment is tricky and for Cisco to reach the result it did, sound execution was very important. There were also continued mentioned on the earnings call of delayed revenues due to the economic and healthcare uncertainty. These delays are notable and an obvious impact to revenue, but the positive could be in a reversal that drives a faster than expected growth.

Geographically, the company saw fairly consistent declines across its major regions, but one area of strength came in margins, specifically in North America, where Cisco increased its margins by 1.7% from the previous quarter and about .7% YoY. Given NA represents slightly more than half of all of Cisco’s revenue, this operational improvement is material and had a big part to play in the company’s beat on the bottom line. 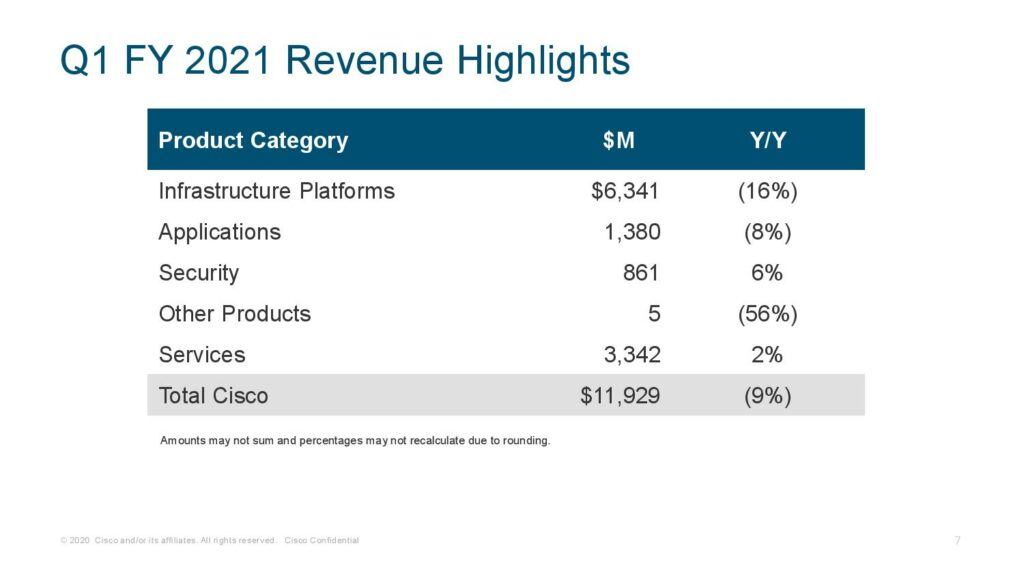 Security and services were the biggest bright spots for Cisco. I weigh the company’s strength in that portfolio as a big key during the pandemic, which has been a catalyst for mounting threats for enterprise and government customers. Cisco is well-positioned to provide the needed technology to counter this increase in cyberthreats and the 6% YoY growth reflects that the market shares my confidence.

Other areas where I believe Cisco is performing well is in Webex and its SD-WAN portfolio supporting the increased demand for remote work. This isn’t changing any time soon, and Cisco should continue to build strength in this category. It would be good to get a better readout on the growth of Cisco Webex, especially after Microsoft announced it had topped 115 million daily active users for its Teams platforms just recently. 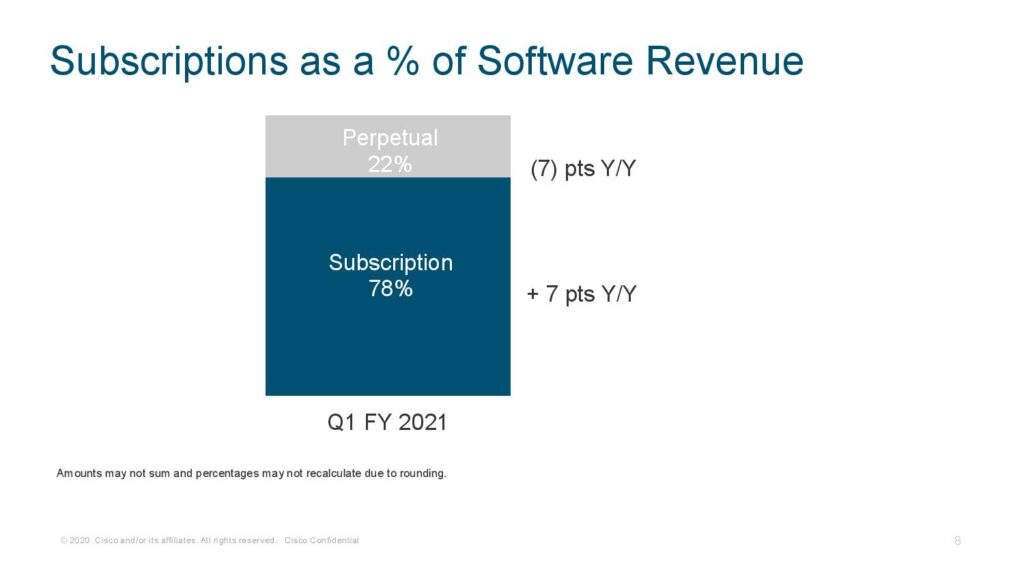 A final note of encouragement for this quarter comes in the company’s 7% increase in moving from perpetual to subscription software revenue, taking this to 78% for the company’s software business. This means stability and buy-in from customers, and the recurring revenue is always a value multiplier for the business. I’m interested in watching Cisco expand and deepen its software bench in the coming quarters.

Overall Impressions and a Look Ahead for Cisco

As mentioned, the guidance looks positive, and overall I feel that this quarter went as well as many could have hoped. The OEM’s in tech have faced much more significant headwind than the pure cloud and software providers.

Cisco benefits from diversity, a strong vision, and sound strategic leadership. Growth and stability are being driven by innovation and a shift from an aging hardware and attached services business model to a more “Cloudified” software, services, and recurring revenue model. I expect this to become more visible over the next 4-6 quarters as we see XaaS (everything as a service) continue to gain momentum in parallel to hybrid IT architecture.

No question growth is the name of the game, and in tech, it is weighed heavily among analysts, press, and consumers. All seeking to ride the momentum. Having said that, Cisco remains a staple for secure, well-built, and engineered IT that enables the world’s businesses and organizations large and small to function. I don’t see this changing any time soon.