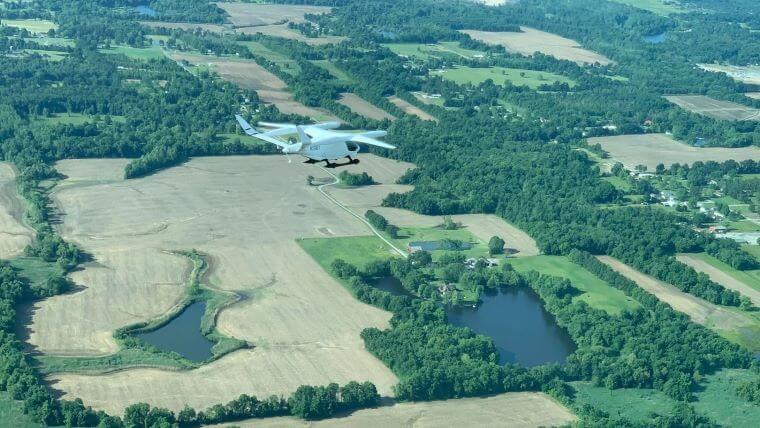 The News: BETA Technologies has received additional funding from Amazon’s Climate Pledge Fund, one year after the first investment. This development comes after the maker of ALIA electric aircraft has made significant headway in producing zero-emissions transport. Read the full Press Release here.

Co-founded in 2019 by Amazon and Global Optimism, The Climate Pledge is a call to action for organizations all over the world to come together and take action on climate change, working to ensure the health of the planet.

Established in 2020, The Climate Pledge Fund is a $2 billion corporate VC fund established to fund promising tech startups focused on developing sustainable technologies that can help Amazon meet the goals set forth in The Climate Pledge. This program continues to pour money into green projects and businesses, including BETA Technologies.

What is BETA Technologies?

Based in Vermont, BETA Technologies is an aerospace manufacturer that develops electric vertical take-off and landing aircraft (VTOL) for the logistics and transport industries. It also creates infrastructure to support its primary products and services.

BETA Technologies has been hogging the headlines for its primary build, the ALIA Aircraft. Dubbed as simple but revolutionary, this VTOL aircraft takes inspiration from the Arctic tern, which can travel a farther distance than other birds. In other words, this can cover many miles while also being incredibly efficient. Its developer also claims that it can easily shift from vertical take-off and landing to long-range flight.

Why BETA Technologies is of Interest to Amazon

According to Fortune Business Insights, the global market for these types of aircraft had already reached over $5 billion in 2021. By 2028, it could hit $23 billion with a compound annual growth rate of 23%. This is obviously a market to watch and it makes perfect sense that Amazon has its eyes on it.

Beyond that, this development bodes well for Amazon, which has long been vocal about its plans to use flying machines for package deliveries, for many reasons. These include:

The need for speed. It’s safe to say that Amazon trumps pretty much all other ecommerce stores when it comes to speed of delivery. Its network of fulfilment facilities and commitment to continuous innovation and laser focus on quick order turn is part of what has made the ecommerce giant so successful. And customers resoundingly want speedy delivery. In NielsenIQ’s Omnichannel Shopping Fundamental Survey released about a year ago, a whopping 61% of survey respondents wanted orders delivered as quickly as possible, compared to 39% who didn’t mind slower delivery speeds and less packaging/fewer trips. A fundamental reality: customers want what they want when they want it. Amazon’s interest in and experimentation with drone delivery services as well as BETA Technologies’ ALIA aircraft can help further shorten the time it takes to get products to customers.

All eyes on that last-mile delivery network. Amazon’s current delivery system covers a massive amount of ground, but there are still gaps — and these are challenges felt by all ecommerce players. The challenges often lie in that last mile, the last part of the journey that gets products to customers’ doorsteps. Amazon has tested different approaches, including partnering with startups with innovative ideas, and the company has also been experimenting with its technologies, such as the Amazon Scout.

I see that BETA Technologies’ ALIA aircraft could be a game-changer in this area. If all goes well, it could become a regular sight in many neighborhoods as it delivers packages quickly and efficiently.

Speed’s good, but sustainability matters to customers, too. The public is growing more conscious about the environment, holding businesses accountable for their carbon footprints. Amazon has been working to reduce its environmental impact for years. Its goal is to be net-zero carbon by 2040, an impressive 10 years ahead of the Paris Agreement’s target. And while we know that consumers want speedy deliveries, sustainability is becoming increasingly important to many. Research from Nielsen IQ showed that larger households with kids are all in on faster delivery speeds, but that both Millennials and people ages 65 and older, along with Asian Americans, are leading the way when it comes to more environmentally friendly delivery methods.

That’s where The Climate Pledge Fund’s recent investment in BETA Technologies comes in, helping the company speed up its progress toward this goal. The fund will back the development and production of the ALIA aircraft. With this, Amazon could soon have more electric planes in its fleet to further minimize its reliance on fossil fuels.

What’s Next for BETA Technologies?

The future looks bright for BETA Technologies. It can potentially become a key player in Amazon’s logistics operations. And with the right amount of support, it could also help the ecommerce giant meet its sustainability goals.

However, the company still faces some challenges.

This isn’t stopping Amazon from pushing ahead with its plans, though, and factoring these capabilities into the company’s overall strategic plans. The company is confident that the ALIA aircraft will be ready for take-off once the regulations are in place.

In the meantime, BETA Technologies is continuing to work on improving the plane’s design. It also tests the aircraft in different locations to gather data and refine its performance.

We will definitely be keeping our eyes on BETA Technologies and the role the company is able to carve out for itself in the aviation industry as a whole, as well as what it’s able to accomplish by way of partnering with Amazon.