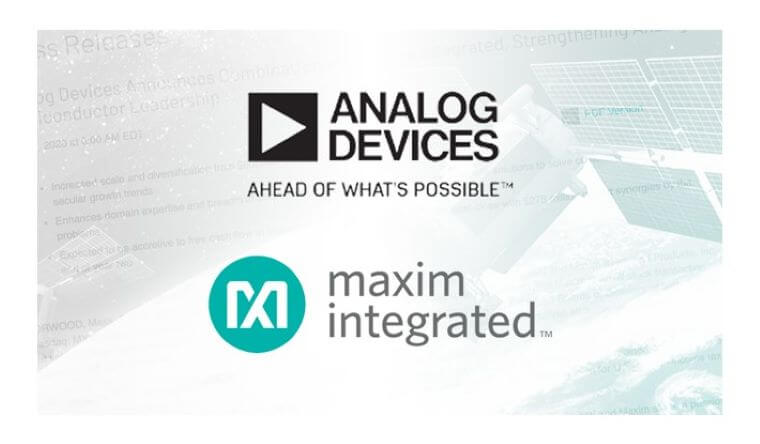 The News: Analog Devices and Maxim Integrated Products announced that they have entered into a definitive agreement under which Analog Devices (ADI) will acquire Maxim in an all-stock transaction that values the combined enterprise at over $68 billion (based on share price as of July 10, 2020 fully diluted shares and latest reported net debt). The transaction, which was unanimously approved by the Boards of Directors of both companies, potentially strengthens ADI as an analog semiconductor leader with increased breadth and scale across multiple end markets. Read the full ADI press release.

The press release announcing this acquisition state the expected outcomes include:

Additional acquisition benefits include augmenting domain expertise and capabilities (i.e., 50K+ products, serving 125K+ customers), 10K+ engineering headcount, ~$1.5 billion in research and development (R&D), earnings accretion, cost savings, and a more robust financial position, as well as improved cash flow generation. While all of the acquisition benefits invoked by ADI are laudable, I believe there is sufficient concern that ADI will not attain the full range of its portfolio and revenue expectations from the proposed acquisition.

I believe there are a number of areas that may frustrate ADI’s business objectives in striking the Maxim deal. For instance, in the network and storage infrastructure chip segment (i.e., data center, storage, networking, communications), Maxim has not moved the needle in the current competitive landscape. With revenues of $400 million in the segment (based on 2019 fiscal year data), Maxim notably trails rivals Intel, Broadcom, NVIDIA, TI, Marvell, NXP, Xilinx, AMD, and Microchip by wide margins. Combined with ADI’s $1.3 billion (fiscal 2019) in the segment yields an aggregate ~$1.7 billion, enabling a modest leapfrog over only Xilinx, AMD, and Microchip.

As a result, based on annual revenues, ADI is poised to make only modest inroads in the network infrastructure silicon market, dampening the idea that Maxim will boost its standing in the hyper-competitive data center semiconductor market segment. Applying back of the envelope math indicates that ~17% of Maxim’s overall revenues originate in the infrastructure silicon segment where the company’s competitive prospects have proven limited relative to the market leaders. By invoking Maxim’s data center acumen, ADI creates the impression the acquisition will transform its competitive prospects — from my perspective, however, that expectation is overstated.

I believe Maxim has been outflanked by major suppliers successfully defending their market positions in the infrastructure and data center silicon realms. In Q1 2020 for instance, Intel’s Data Center Group, including chips for cloud providers and enterprise-focused server makers, posted $6.99 billion in revenue, growing 42.7% in relation to Q1 2019. Maxim, let alone the combined ADI-Maxim will likely prove hard-pressed to generate similar quarterly results in this area as the company lacks Intel’s channel resources and sales and marketing dexterity.

Based on annual revenues, ADI has proved capable of maintaining its competitive position, but now has the distraction of integrating the Maxim assets into its overall organization while also taking on new line-of-business sales support and channel obligations in market segments such as data center, 5G, and automotive. While this concern is not unique to ADI’s acquisition of Maxim, I foresee ADI is at risk of overextending its corporate and portfolio resources in an attempt to compete long-term against top-tier player such as Intel. Moreover, I expect the expanded ADI will have a more challenging task in delivering the portfolio development focus needed to differentiate against players like Marvell who are primarily dedicated to the infrastructure silicon segment.

In addition to the concerns outlined above, ADI also needs to address its supply chain and distribution strategy post-merger. Currently ADI uses Arrow Electronics, Mouser, and Digi-Key as its distributors to end customers/OEMs. In contrast, Maxim plies its products through Avnet, RS Electronics (automotive electronics), a variety of specialist and local firms, catalog distributors Newark, Mouser, and Digi-Key.

Of note, ADI discontinued its channel relationship with Avnet after completing the acquisition of Linear Technology in 2017. Now ADI must decide the best approach for optimizing its post-merger distribution strategy which likely entails severing the existing channel relationship between Maxim and Avent in order to obtain consolidation efficiencies.

I see the situation presenting another source of distraction and potential disruption for ADI in the process of integrating and absorbing Maxim assets. Should ADI decide to break off the existing relationship between Avent and Maxim, which is likely due to the post-Linear precedent, the company takes on the added task of re-training personnel and re-orienting products to a new channel arrangement (e.g., Arrow). In the meantime, ADI’s main rivals avoid similar burdens altogether or to the same extent through the summer of 2021 when the acquisition is expected to close.

Through the $21 billion acquisition of Maxim, ADI is broadening its portfolio and gaining new footholds especially in the automotive and mobile/5G communications networks segments. The company has the resources to handle the Maxim purchase during the ongoing and emerging uncertainties stemming from the global COVID-19 pandemic, including supply chain oversight and managing demand flux.

However, I believe ADI is heading into headwinds in attaining full value from the network infrastructure silicon portion of the Maxim portfolio and is dealing with significant supply chain assimilation challenges, thereby dampening the upside of the overall deal. ADI needs to prioritize touting new wins in the network infrastructure segment (i.e., data center, 5G communications) post-merger to allay addressable market concerns and likewise rapidly implement its supply chain optimization strategy. I look forward to following such development and the overall progress of the deal.