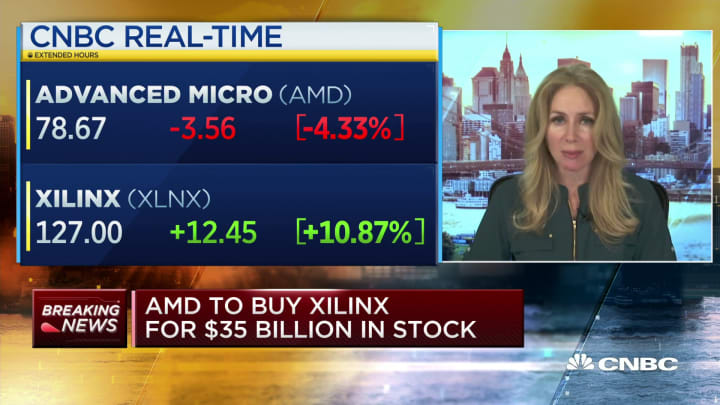 The News: Semiconductor designer Advanced Micro Devices on Tuesday said it has agreed to buy Xilinx in a $35 billion all-stock deal and announced its fiscal year Q3 earnings today. Read the full news piece on CNBC.

Analyst Take: Today’s announcement in many ways warrants two research notes, but given that I have provided my overall thoughts on the AMD acquisition of Xilinx in a MarketWatch Oped recently, I’m going to keep this brief, focusing on a few of the emerging details that came from the Xilinx announcements and then turn to some of the key earnings announcements related to AMD’s strong quarterly results.

Details Emerge of the AMD Acquisition of Xilinx

The news per the AMD press release and deck

The following are the deal highlights: (H/T Patrick Moorhead on Forbes)

The following are management and governance basics:

The initial price that was floated was $30 Billion, so as you can see, the price went up a little bit ($5 billion). The immediate cost synergies, larger TAM, and larger Pro-forma all provide a certain amount of confidence that this will be a good deal long term. The combination of the companies also clearly strengthens its play in the data center and high-performance. I still worry that the price may be high, the return on the large investment may take some time to realize, Xilinix revenue has been a bit stagnant in recent quarters, and the lack of a strategy to build ASICs at scale also raises a few alarms. This is why I have said that $40 billion for NVIDIA/Arm seemed a more exciting deal overall. However, I do think this deal should close efficiently without an undue amount of scrutiny, which may become a discussion topic as NVIDIA and Arm go through the process.

Check out our Six Five LinkedIn Live where we dig into both the deal and the earnings results.

Strong Earnings in Q3 for AMD

AMD announced that its revenue for Q3 was $2.80 billion, up 56 percent year-over-year and 45 percent quarter-over-quarter driven by higher revenue in both the Enterprise, Embedded and Semi-Custom and Computing and Graphics segments.

This rate of growth is astounding, and bodes well for the company’s prospects in the future.

The company has had momentum in the notebook and graphics space for sometimes, and this quarter further emphasized this with double-digit growth. For the Computing and Graphics segment this quarter, the strength seems to be in CPU over graphics. The segment revenue was $1.67 billion, reflecting an increase of 31 percent year-over-year and 22 percent quarter-over-quarter. Revenue was higher year-over-year, driven by a significant increase in Ryzen processor sales partially offset by lower graphics revenue. Revenue was higher quarter-over-quarter, driven by a significant increase in Ryzen processor sales and increased graphics revenue. The company touted that it believes it captured market share for the 8th straight quarter, which makes sense at first glance based on the growth rate here versus Intel announcing 1% growth in the CPU business in its earnings last week.

The largest growth came in its enterprise and embedded business. The company report showed that Enterprise, Embedded, and Semi-Custom segment revenue was $1.13 billion, up 116 percent year-over-year, and 101 percent quarter-over-quarter. Revenue was higher year-over-year and quarter-over-quarter due to higher semi-custom product sales and increased EPYC processor sales. This has been a big focus area for AMD, and it seems to be reaping reward as this growth is certain also to impact market share in the CPU server space. I believe long term, it will still be very challenging to gain much beyond 10% data center CPU market share in server as Intel still has a solid position there and preference for data center chips is a much more gradual and impactful changeover than the preference for PCs.

The company also showed confidence in its future by announcing a larger expected YoY growth in its guidance, moving from 32% to 44% for its full fiscal year.

I’ve been skeptical at times of AMD’s ability to continue its momentum. Still, this quarter once again shows legitimacy in its momentum–The Xilinx deal will add significant strength in its high-performance business as well. A positive day for AMD.