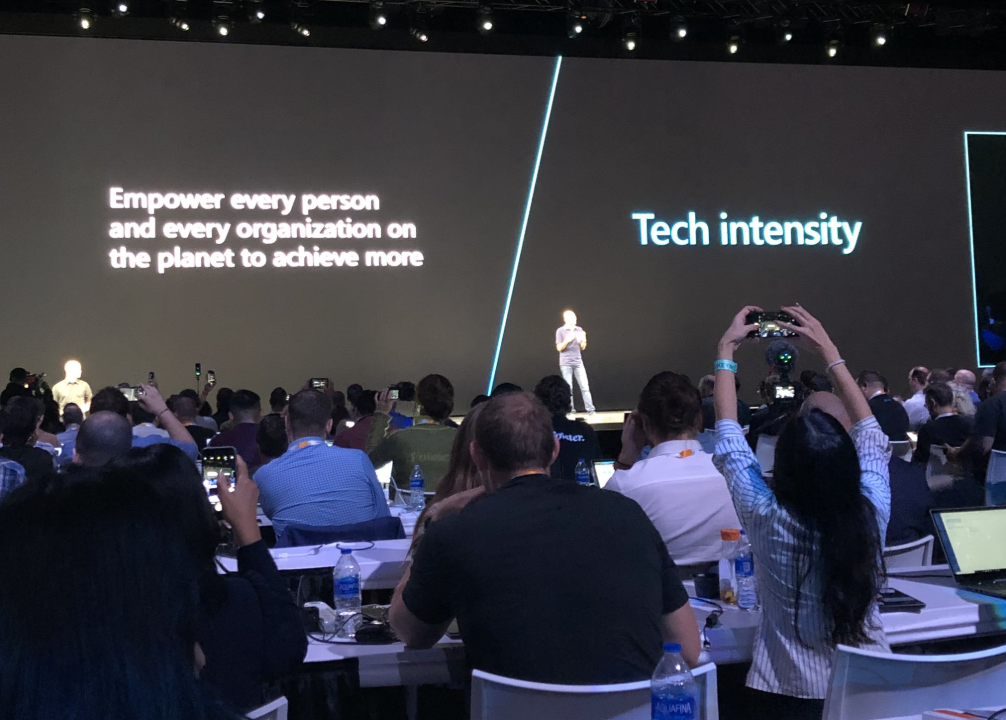 This year’s Microsoft Ignite 2019 keynote delivered by Satya Nadella was a true example of the “firehose” that is so often flaunted from the stage to illustrate a plethora of information about to be delivered in a short amount of time.

Prior to the keynote, I previewed the Ignite event on The Six Five Podcast. I had anticipated key topics from Nadella to include Privacy, Digital Trust, Cloud, AI, and Security and, for the most part, I had identified the right key focus areas. That said, I’ll be the first to admit that I was not expecting the massive volume of updates announced.

Nadella’s approach to delivering what Microsoft called, the Vision Keynote, was an “Up the Stack” approach:

However, before diving deeply into all of the announcements from the event, Nadella spoke first about something he called Tech Intensity. I boiled this down to a growing need to change the vernacular beyond Digital Transformation and to provide a new formula for maximizing tech investments and building an organization that can adopt tech and adapt to change at scale to survive exponential times.

I love that trust is the exponent rather than just one of the variables. If an organization has the trust of its employees, customers, and partners, then transformation becomes faster and more prolific inside the enterprise. A very encouraging thought. However, this is a tech conference, so even though the ephemeral delivers a sense of the warm fuzzies, the show must go on. That means that while I’m excited by the concept of Tech Intensity and all that connotes, I’m obligated to talk about what Microsoft announced here at Ignite.

While it would be nearly impossible to share all of the announcements in a single roundup, what I do want to do is focus on some of the key announcements from the bottom to the top of the stack to provide some color on just how expansive today’s launch was and what caught my attention. I’ll focus specifically on Infrastructure, Power Platform, and a few bonus thoughts on Microsoft Teams and Browser updates.

Nadella’s Microsoft Ignite 2019 announcements on infrastructure announcements were arguably the most comprehensive and, given they came first, were met with a lot of enthusiasm. Nadella began focused on the expansion of Azure, pointing out that Azure now has 54 regions. The expansion certainly has had something to do with the recent wins for Microsoft, including the highly discussed JEDI contract.

The regions though, were really just a warm up for what came next, and that was a flurry of announcements that included Azure ARC, Azure Synapse, Project Silica, and Azure Quantum, all of which were significant in their own right.

While I will definitely need to spend more time unpacking this further, Azure ARC is a compelling announcement that is designed to address modern IT architecture. Azure ARC serves as the control plane, orchestration, and tools for handling complex cloud environments that include on-prem, multi-cloud and containers. This looks to be building on the Azure stack to further enable enterprises to handle on-prem, cloud, and edge seamlessly from Azure.
Azure Synapse is a strong response from Azure to help organizations manage real-world data challenges by bringing together data warehouses and data lakes to deliver rapid analytics. The claim to fame on this one was that Azure Synapse will handle complex queries up to 75x faster than Google Cloud Platform’s Big Query. Further demonstrations illustrated Azure Synapse as more capable to handle concurrent load for querying at scale than both GCP and Amazon Redshift. Game on — that’s exciting.

Project Silica and Azure Quantum focus on Storage and Quantum respectively. Silica is a development project that Nadella described as using simple quartz glass to store massive volumes of data. Azure Quantum spoke to the company’s ambitions to democratize Quantum through open software and hardware through partnerships with a number of Quantum leaders, including the likes of Honeywell for Ion Trapping and Q# for open software.
Nadella also dove into the company’s comprehensive security approach that deals with identity, devices, cloud apps, data, and infrastructure. The focus is to enhance automation to make endpoints and infrastructure more secure without adding complexity for IT administrators.

Power Platform was the subject of a few announcements, but the low code/no code platform that is driving software at scale is an underlying theme of the event. The announcements, however, were around Automation and Virtual Agents, called respectively Power Automation (formerly Microsoft Flow) and Power Virtual Agent, which is a no code approach to creating and deploying intelligent, AI-powered bots.

Power Automate was very interesting, as it appears Flow is continuing to evolve with Robotic Process Automation (RPA). This enhanced capability allows users to turn manual tasks into automated workflows by recording and playing back human-driven actions across software that doesn’t support API automation. All of this can be done without any coding, just by way of point and click. This has the potential to further revolutionize and deliver intelligent process automaton at scale, which I believe is the next step in automation in the enterprise.
Dynamics 365 focused in on its Customer Insights offerings, which continue to expand, including a series of announcements that came earlier this fall.

Office 365 got my attention with the launch of Project Cortex. This is essentially Microsoft’s expanding social graph that enables data to be utilized more effectively to drive more productivity. Nadella pointed to a stat claiming that 73% of all data continues to go unanalyzed, meaning despite all the data talk, the data walk is still leaving something to be desired. Project Cortex uses AI to help workers access knowledge interactively, understand the context of an individual’s work, and to stay on topic. Worker attention was something else that was specifically called out, as research shows it takes employees more than 25 minutes to get back on task when distracted or taken off task.

For Microsoft Teams, it is becoming increasingly clear that this product will be used pervasively as part of the Office 365 ecosystem, so it was good to see Nadella highlight it at Ignite. He focused on Teams being the Hub for teamwork, but what actually caught my eye the most was an announcement that came out today from Cisco Webex that the two companies were enabling collaboration for Teams to run on Cisco Endpoints.

While the two companies are certainly competitors in collaboration, I believe this approach is sound and gives them both some enhanced capabilities to compete with upstart Zoom. Poly, another endpoint maker for Collaboration, is also focusing on embedding Microsoft Teams in its hardware. This is a strong indicator of the increased migration toward Microsoft Teams as the chosen enterprise collaboration tool in many enterprises.

Microsoft Edge showed a future where the browser no longer had to play second fiddle to its competitors by reaching parity with Chrome for speed and compatibility.

For me, however, it was the privacy announcements for Edge that show the company’s deep underlying commitment to building a browser that respects individual privacy, while still giving its users the benefit of choice in terms of how much data they want to share. I believe Microsoft Edge will have a chance to differentiate on this capability and perhaps even gain some much-needed market share in this one area where wins have been a bit harder to come by. Time will tell on that front.

An Intense Show of Tech Intensity

Microsoft is so diverse, that it isn’t surprising an event like Microsoft Ignite 2019 would be so inundated with updates from across the stack. Ignite 2019 certainly did not disappoint.

For me, the work that is going into Azure, at the infrastructure layer, is setting the tone for the company’s continued growth in every area—from software to browser to cloud.

During this year’s event, the company further addressed modern IT architecture, privacy, security, and software development at scale, all while keeping an eye on sustainability, personal privacy, and organizational transformation and its massive complexity. But moreover, Nadella, as he so predictably does, tied his vision of “Tech Intensity” to a set of well-designed market-ready products and services that will enable companies to expedite their digital transformation.

Perhaps the craziest thing about all of this…It was only day one. Which could easily mean that there are more announcements to come. Stay tuned…