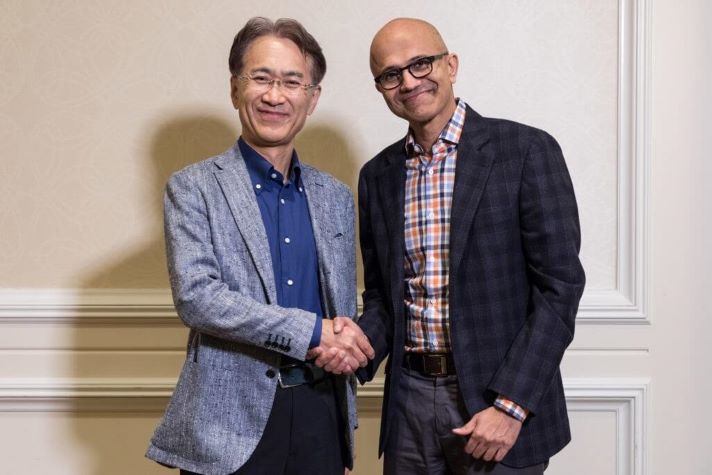 When giants battle the ground shakes. When those same giants stop fighting the universe shakes. This week, Microsoft and Sony announced a memorandum of understanding outlining areas of cooperation between the two companies. Sony will leverage the Azure platform for streaming services, and Microsoft will explore using Sony’s imaging and sensor technology.

Microsoft and Sony Have a Common Enemy

Microsoft and Sony have a common enemy: Google. When Google announced its new Stadia platform, both Redmond and Tokyo took notice. I wrote about that here a few weeks ago if you’d like a deeper dive: Google Stadia Revolutionized Gaming—Here’s Why It’s Too Late. But the news from Google was a very big deal. Suddenly there was a significant threat to the Xbox and PlayStation. And the threat from Stadia isn’t just any threat, it’s a threat that comes with the backing and bankroll of Alphabet/Google.

Stadia works to play on the search power of Google and instant play and playback of YouTube. With those tools in place, Stadia could put a dent in the bottom lines of both Microsoft and Sony. As I said in the article mentioned above, I don’t believe that Google Stadia will get there, but it served to set the big two on notice: Google is a threat and one that needs to be dealt with swiftly and soundly.

Microsoft Has the Cloud Power

Microsoft Azure is a powerful platform. Azure is used by the U.S. government, Fortune 100 companies, and universities across the U.S. The Azure platform is up for a significant U.S. Department of Defense contract that will see the system be used for a $10 billion cloud contract for the Pentagon. The JEDI (Joint Enterprise Defense Infrastructure) contract sets the DoD up to upgrade antiquated systems with a more robust cloud-based system. JEDI is a massive as a service contract that will position Microsoft as the market leader in cloud platforms.

Sony will leverage this position and power to build out their own service, PlayStation Now. Now has been relatively stagnant since it was introduced. Using Azure, Sony will build out the cloud gaming aspect of their business. In addition to just placing PlayStation Now on Azure, the two companies have committed to “explore joint development of future cloud solutions.” Exploring joint development means the two most prominent players in console gaming will be joining forces, assess what the needs and possibilities of cloud gaming really are, and move forward together.

Doing Business With The Devil You Know

Another reason for the Microsoft and Sony partnership is the wisdom of doing business with the devil you know. Sony had several options when exploring a cloud platform. IBM has a formidable cloud computing service. Amazon obviously has its solution and is in the finals with Microsoft for the DoD JEDI program. Sony could have partnered with Google, and Oracle was also an option.

In the end, Sony chose Microsoft because they not only have the cloud power, they understand the business model. Choosing Google would have been giving a competitor an advantage as Google Stadia gets off the ground. It was better for Sony to go with the devil they know in Microsoft, feeling confident they had already overcome common hurdles Sony would have encountered.

Microsoft and Sony will both release new versions of their consoles in 2020. The partnership will allow game developers the ability to make minor changes to their games before porting to either Xbox or PlayStation. Developers will need to do more work to get their games ready for Stadia’s Linux-based hardware.

Overall, this is a prudent move by both Microsoft and Sony, as they fend off new players in a space they have dominated for almost two decades.

Microsoft Will Make Its AI Search Code Available to Developers

Walmart and Microsoft Partners: What This Will Mean for Retail’s Digital Transformation