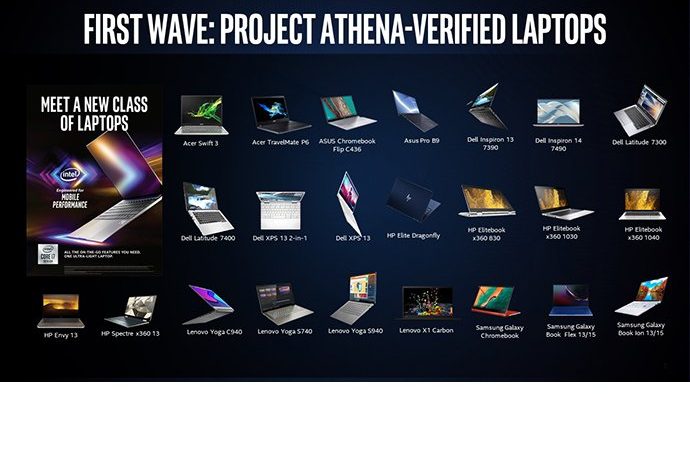 The News: At CES 2020, Intel provided significant updates on its “Project Athena” innovation program, including the first Project Athena-verified Chromebooks. Project Athena certified designs have been tuned, tested and verified to deliver fantastic system-level innovation and benefits spanning battery life, consistent responsiveness, instant wake, application compatibility and more. Intel has verified 25 Project Athena designs to date, and Bryant announced an expanded partnership with Google that has already resulted in the first two Project Athena-verified Chromebooks, the ASUS Chromebook Flip (C436) and the Samsung Galaxy Chromebook. Intel expects to verify approximately 50 more designs across Windows and Chrome this year and deliver a target specification for dual-screen PCs. Read the full press release from Intel along with its additional announcements from CES here.

Analyst Take: The future of the PC is changing and this will impact the laptop more than anything else. With the newest generation(s) of mobile devices, from large format iOS and Android devices to the Samsung Galaxy Fold to Microsoft’s impending Neo and Duo device, we are seeing increasingly powerful mobile devices that offer the best of computing and mobile capabilities. This means a different future for not only those using the devices, but also for the companies building devices as well as for those those supplying the CPUs, GPUs, modems and more.

For Intel, Project Athena has been a focus in supporting its ecosystem of OEMs to develop these next generation of devices.

A Quick Review of Project Athena

For those less familiar, Project Athena isn’t a specific chipset or SoC, but rather a set of parameters by which OEMs can certify devices to meet what Intel envisions as the next mobile standard—or what I like to refer to as the ACPC (Always Connected PC). Via Project Athena, Intel is essentially setting guidelines for its OEMs to build devices that have lower power consumption, quick wake times, and the ability to include constant connectivity via LTEm and soon, via a partnership with MediaTek, embedded 5G.

The Importance Behind Project Athena Announcements at CES

The importance behind Intel’s Project Athena Intel is significant, as the company is facing increased competition across numerous areas of its business. As just one example of this increase in competition in areas where Intel has historically held significant market leadership is AMD’s announcement at CES of lower cost CPUs.

In the mobile compute space, Intel is also facing increased competition, most notably from ARM and chipmakers like Qualcomm, who have built specific systems to help OEMs build ACPCs. Last year Lenovo, Samsung, and Microsoft all built ACPC products using Qualcomm’s mobile compute platform. While the marketshare for the ARM/Qualcomm offerings is still relatively small, the competition is heating up and Intel has most certainly taken notice.

This said, I believe it is important that Intel continues to show strong support from the OEMs via their commitment to building Project Athena-certified devices. I see the Chromebook market as a significant opportunity and it appears based upon the commitments from ASUS and Samsung here at CES 2020, that Intel sees this opportunity as well. These Project Athena-based Chromebooks will likely have a big play in education.

Overall, the next generation of PCs will need to do more of what Project Athena is committed to. Faster wake, longer battery life, and high speed connectivity without WiFi are without question going to be required. Intel will have its work cut out for it as Qualcomm and ARM are a strong competitor and are building some nice devices, with some well reputed OEMs. The continued design wins will be important for Intel, especially as enterprises will be looking for ACPC-like devices with upcoming refreshes, making this much more than just a consumer play.