Google Slapped With Record $5 Billion Fine: Why it matters, and what happens now? 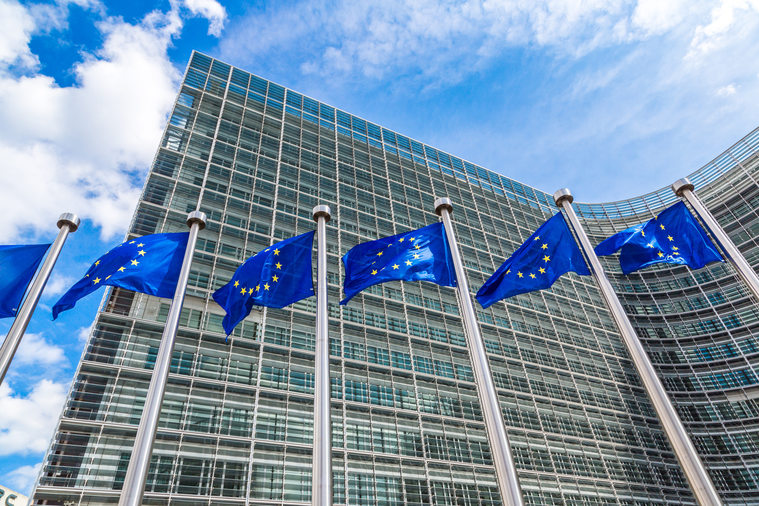 This week, Google was slapped with a massive $5B fine by EU regulators in a landmark antitrust case.

What you need to know:

“Google has been hit with a record-breaking €4.3 billion ($5 billion) fine by EU regulators for breaking antitrust laws. The European Commission says Google has abused its Android market dominance in three key areas. Google has been bundling its search engine and Chrome apps into the operating system. Google has also blocked phone makers from creating devices that run forked versions of Android, and it ‘made payments to certain large manufacturers and mobile network operators’ to exclusively bundle the Google search app on handsets.”

As reported by CNN.com:

“‘Google has used Android as a vehicle to cement the dominance of its search engine,’ Margrethe Vestager, Europe’s top antitrust official, said in a statement. ‘They have denied European consumers the benefits of effective competition in the important mobile sphere,’ she added.”

For Google, this could mean a potential reduction in its European install base for some of its most critical Android-based services, namely its browser and search engine, which Google derives significant annual revenue from. For a better glimpse into how important mobile search and mobile ads are to Google, this handy graphic from Statista, which plots Google’s annual mobile ad revenue from 2014 to 2018 (estimated), should clarify things a bit. 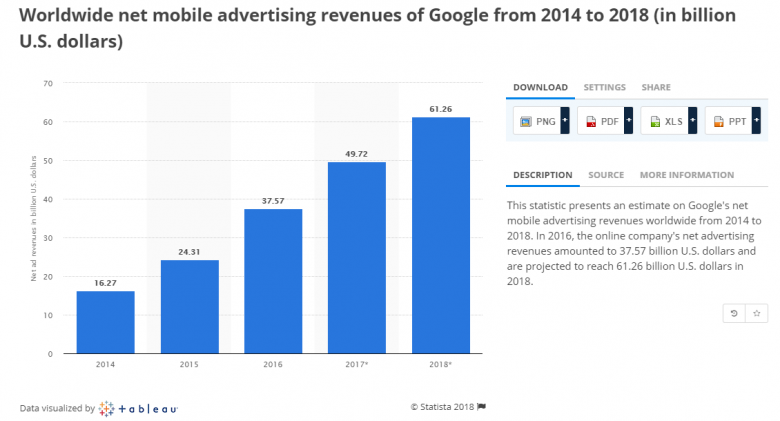 If you aren’t sure how mobile search plays into mobile ads, you may want to look into PLAs (Product Listing Ads) to get a glimpse into the ever-evolving connective tissue between the two. More broadly, earlier this year, Alphabet CFO Ruth Porat stated that mobile search was leading Alphabet’s strong growth. We estimate that mobile ad revenue from European Android users may amount to 10% of Google’s global mobile ad revenue.

Why this may not matter a whole lot:

As I just mentioned, European numbers only constitute a portion of Google’s global numbers. To put things in perspective, here are some more numbers for you to play with: 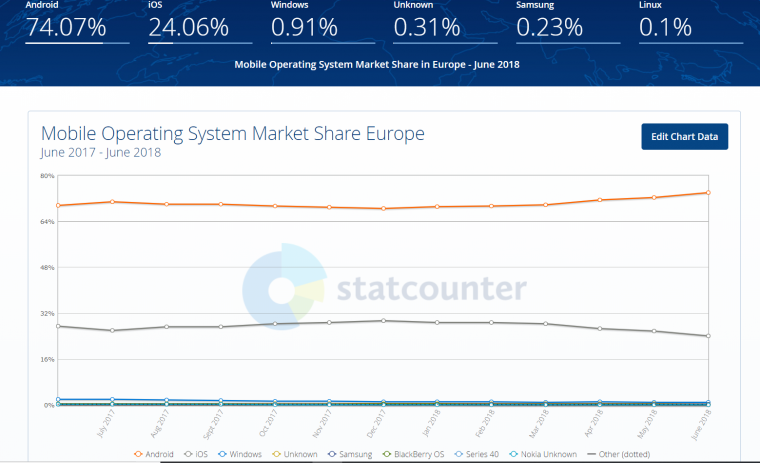 Thus, in a hypothetical exercise in which Google might see a 10% drop in mobile ad revenue in the EU next year because of this ruling (and there is no indication that it will – this is only an exercise), that “loss” would only amount to somewhere around $400 Million to 600 Million, or somewhere south of 1% of its global mobile ad revenue. In short: Big fine, but nothing to panic about.

The fine is the largest ever imposed by EU regulators, and Google has 90 days to respond.

It is significant to note that this is not Google’s first bit of record-breaking trouble with EU regulators: 13 months ago, Google was already slapped with a $2.7 billion fine for illegally favoring its own comparison shopping site over competitors. At the time, that was the largest antitrust fine imposed by the Commission against a company for allegedly abusing a dominant market position.

In the next six months, keep an eye on three things:

1) Will Google look for a way around this ruling? (In my opinion, no. See my next answers for why Google may not really have to.)

2) How will this ruling affect product management decisions regarding Android handsets sold in Europe in H2 of 2018, 2019, and beyond? Will we see more “forked” handsets turn up? (Yes, but I think that handset makers will test the market before making any big bets on forked handsets.) Will handset makers leverage their newly-found freedom to push lower-priced Android handsets in markets in which smartphone sales have softened in recent quarters? (Yes. I think that handset makers would be foolish not to at least test those waters.) Will we notice any change at all? (If so, only marginally. Expect to see a few interesting product offerings, but no major sea change in 2019.)

That’s it for now. You’ve been briefed.