Futurum Live! From the Show Floor with Kyndryl’s Richard Baird at SHARE Dallas 2022 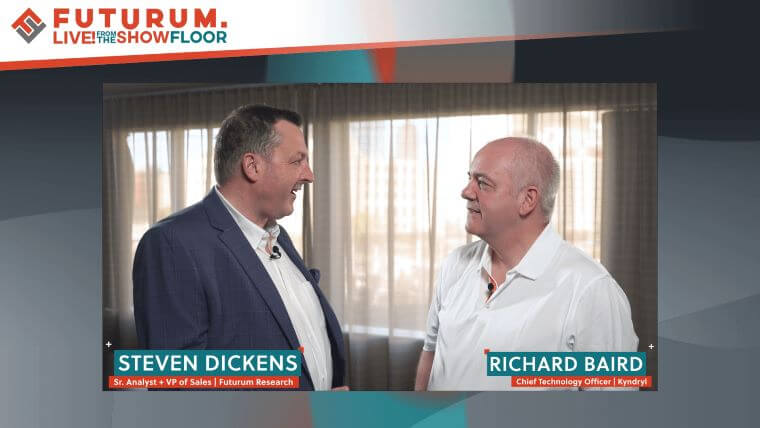 To learn more about Kyndryl check out their website.

Steven Dickens: Hello and welcome. My name’s Steven Dickens, and we’re coming to you live from SHARE in Dallas. I’m joined today by Richard from Kyndryl. Thank you for joining us.

Steven Dickens: It’s great to be in in-person event again after all these years.

Steven Dickens: It does. It kind of feels like there’s a real buzz down there on the Show Floor. People kind of glad to be back out and in person.

Richard Baird: Yeah, I mean, they’ve been at home. They’ve been stuck behind screens for two years, and it’s great to be able to reestablish old friendships, see people you’ve not seen for quite a while.

Steven Dickens: So Richard for our listeners and watchers, tell us a little bit about what you do for Kyndryl.

Richard Baird: All right. So Kyndryl, which was a spin out from IBM about four or five months ago, it’s about 19, 20-billion dollar company and with 90,000 employees. My role in the company is we’ve got about eight and a half thousand people who look after mainframes, so this community. I’m the CTO for everything that has to do with mainframes in Kyndryl. That’s my role.

Steven Dickens: So that must be a huge role. Give us a little breakdown of sort of what that involves from a technology point of view, because that’s a huge landscape.

Richard Baird: It’s spans the gamut, right? I mean, with six million MIPs under service delivery. With the number of systems that we’ve got, we literally look after zOS, zVSE, zBM, zTPF, any operating system you’d like to run. We’ve got a little bit of everything from all of the suppliers and a lot from some of the others as well. So not only IBM software, but Broadcom, BMC, et cetera, et cetera.

So I get to worry about all the different aspects of the business, up to and including the new business ventures that we’re doing with the likes of the hyperscalers like Microsoft, as we take the mainframe and start to extend it and get it closer to the hyperscaler environments, and how we can take new technologies, modernize the mainframe environment, get it more closer to hyperscaler environment, or just modernize on the platform, maybe repurposing or moving applications from the mainframe to a new environment. So Kyndryl has a view of right platform, right workload. So what we’re able to do here with the tools, the techniques and the skills that we’ve got is literally enable people to modernize their mainframe in place, or start to move some workloads around, connect it to hyperscaler and other environments in a consistent way together with a integrated application development story.

Richard Baird: They are questioning. They’re not questioning doing it. They’re questioning how to do it, right, where do we get the skills to do it. Because a lot of them are suffering from a lack of skill in their own shops. People are retiring. The knowledge base is retiring. How do they go about building the skill to be able to go in and open up the applications and data that they’ve got and they want to reuse in the environment? So you take something from the world of Kyndryl. So they said we’ve got about eight and a half thousand engineers. Average age is about 30, and we do that through a skilling and staffing program that constantly refreshes the pool. But it also gives some exposure to additional techniques, skills, whatever they need in order to go in and help do the transformations.

Now clients are, they’re worried because maybe we don’t know everything about the applications that we’re going to do. They don’t know about the technologies that they need to use in order to do it. There’s a lot of fact-finding, I think that would be the best way to describe it. Some people have done some of it, right? They’ve played around a little bit. They’ve experienced. They’ve got some successes. They’ve got some failures. They’re learning from it.

The main thing, the main message is don’t be scared, right? The technology is there. It’s robust, and it’s as much a story of technology transformation as it is a story of talent and human culture transformation, as you bring the mainframe and the hyperscaler environments together in a much more hybrid cloud style.

Richard Baird: So we tend to see is once again, it runs a range of topics. It goes from something like I want connectivity between my mainframe and my nearest hyperscaler entry point, public hyperscaler entry point to maybe having a private hyperscaler deployment in the data center near my mainframe. Then they get to, “Well, that gives me latency or fixes my latency issues.” Then they start to move into, well, “Okay, I’m going to start doing some application integration between new apps on the hyperscalers and on the mainframe.” Then they want to get into some data sharing, either dynamic data sharing or an export transform reload of the data into a hyperscaler environment and vice versa. Then they finally move into a single management of a combined environment between the hyperscalers and the mainframe, where from single console or single playbook they can drive operations on both sides of the equation.

Steven Dickens: So obviously a lot of people here, I think consensus estimate is about a thousand attendees in person, which is great to see, a lot of people consuming the content online and maybe what sort of catching up. What would be the three key takeaways that you’d have for those people if you could influence them from a Kyndryl point of view?

Steven Dickens: So Richard, great. Thank you for joining us. Really appreciate you spending some time with us. Lots to see here from Kyndryl at the show. We look forward to chatting again soon.

Thank you for joining us for this episode of the Futurum Research live from the Show Floor. We’ll see you next time.