Futurum Live! From the Show Floor with Kyndryl’s Frank DeMarco at SHARE Dallas 2022 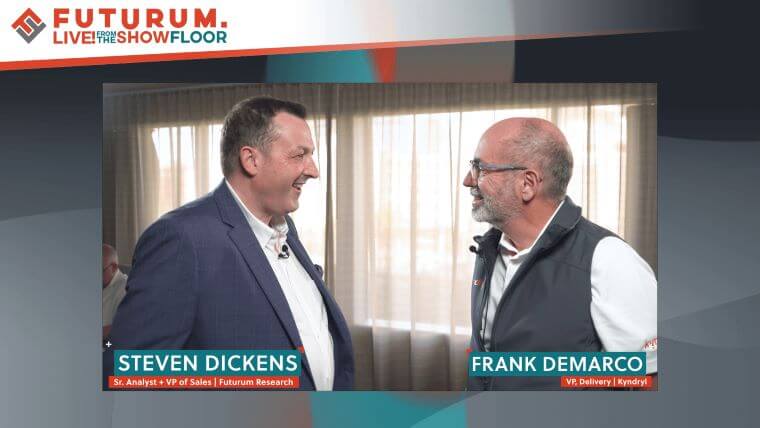 Futurum Research Senior Analyst and VP of Sales Steven Dickens talks with Frank DeMarco, VP, Development at Kyndryl about the company’s recent launch, their partnerships with hyperscalers, and the extensive apprenticeship and training program that keeps their 8,300 member delivery team skilled and trained.

To learn more about Kyndryl check out their website.

Steven Dickens: Hello and welcome. My name’s Steven Dickens and you are joining us here, live from the Show Floor at SHARE in Dallas. Welcome to the show.

Steven Dickens: It’s great to be here in person. It really is.

Steven Dickens: You pick up the buzz.

Steven Dickens: So tell us a little bit about your role and what you do for Kyndryl.

Frank DeMarco: So in Kyndryl, I run the delivery team for Core Enterprise and Z Cloud.

Frank DeMarco: The simple version is the delivery team, there’s about 8,300 of us that run mainframes and therein I run that organization.

Steven Dickens: So Frank, you mentioned 8,300 people in your organization. How do you keep them skilled and trained?

Frank DeMarco: Yeah, thanks for asking that. It’s really important for us and a big differentiator. We hire over 300 college students a year, so we recognize there’s some retirements going on in the business, and we’ve got to keep a vibrant organization, and we have a whole training program for that. And it’s different by country as to what’s the best way to do that. Here in the United States, we have an apprenticeship program bringing in apprentices. That’s the right way to bring in people in the US. In India, we bring them in through college hires.

So we have that program as our base, and then we have a skills program for every one of the employees. We look for every employee to get at least two technical badges a year. So we have a staggering number of technical badges with the team. And we have a whole modernization in our own badging program that aren’t easy to get, but really challenge the employees to always learn. And it’s been terrific. It really differentiates us, and the employees have embraced it, and our customers recognize you’re training your individuals to be the best in the business.

Steven Dickens: And you mentioned the customer feedback. Do you see that reaction from the customers when you talk to them about what you’re doing to invigorate skills?

Frank DeMarco: Yes. Yeah. Yeah. I really do, really do. Some key customers are, “Oh wow. You do that?” And we do.

Steven Dickens: Fantastic. So obviously, tell us a little bit about Kyndryl. Still, people are coming to terms with the organization. You guys have been on your own now outside of IBM, since what was, last November?

Steven Dickens: The day burns on your memory banks.

Steven Dickens: Kyndryl’s come to market four months ago as a new separate standalone company. Tell us a little bit what’s been going on with the organization, especially your part of the organization since the split.

Frank DeMarco: What we like to say is that we’re agnostic, but we have an opinion.

Frank DeMarco: And someone has said remove the shackles of IBM. There’s always, well, you could use this product, but then there’s this IBM product. Well, now we’re agnostic, but sometimes the IBM product is the best product. And it’s really changing the environment for us and allowing us to really say, and you may have seen the partnerships we’ve made with Hyperscalers, and allowed us to say that’s part of the business, because that’s where our customers are. Mainframe is a core piece of the operation of many of our customers, and will remain so, but they also need to connect it to the cloud. And now we are that valued partner, and it’s really coming out as that valued partner because we’re not part of IBM. We are the largest mainframe services company in the world, but we have these great partnerships with Hyperscalers. It’s the perfect setup.

Frank DeMarco: The term I use is a continuum. Some are way back on the journey and some are much further along, so it’s dependent upon the customer. We have a continuum of customers. The value that we’re bringing to the table is we can handle that continuum, from they’ve got very basic mainframe operations and we need to bring them up to speed, to they’ve got a very modern platform and they’re looking for a partner that can manage that and keep them going forward. So really, I’m seeing the whole gamut.

Frank DeMarco: What am I seeing? So there’s different ways to answer that. Right? If you asked a Hyperscaler, some of them, they’ll say it’s migrate off. But some of them will admit no, it’s a hybrid story. What we are seeing is it is a hybrid story.

Frank DeMarco: And someone asked me in this conference, how many have really completely moved off? And it’s a very low percentage that we’ve seen, and it’s because we think it’s simple. Well, no, it’s not. And then, wait a minute. That is the best platform for our workload. That’s the other thing that we say in the Core Enterprise and Z Cloud business, is our motto is the right workload on the right platform.

Steven Dickens: And you’ve mentioned that a couple of times. How do you go through? Is there a mental model? Is there a process? Is there a thought process that goes through and does that workload analysis?

Steven Dickens: Rather than starting with the technology and trying to drive forward?

Frank DeMarco: Oh, no, no. Yeah. Don’t start with a technology answer. Oh, I just want to put it on the cloud. No, you start the application, and then what’s right.

Frank DeMarco: Really, they’ll see from us that we have that agnostic view, some great sessions on DevOps, really the growth that we need. Our customers, and really push for all mainframe users, is that is something to make the platform viable for the future, and really that’s what makes the new people coming into the business, that’s what they’re looking for so it’s a fit, and that’s an investment that everyone has to make to keep the platform viable.

Steven Dickens: And if you were to try and boil it down to those three key takeaways from Kyndryl, or from what else you see at the rest of the show, what would those be?

Frank DeMarco: Three key takeaways. Well, I’m big in DevOps. So a key takeaway, the importance of DevOps, every one of us in the mainframe business embracing that and making that clear to our customers. And so you said you want two more to take away?

Steven Dickens: Yes. I put you on the spot, Frank.

Frank DeMarco: For Kyndryl, that we are the biggest mainframe services provider.

Steven Dickens: I don’t think you get the credit for that, by the way. So I think I’m glad you brought that one up.

Frank DeMarco: I don’t get the credit for that?

Frank DeMarco: Yeah. Yeah. They’re like, who is Kyndryl? Well, we’re the biggest mainframe services provider, is one of our…

Steven Dickens: And I don’t think it’s anywhere in question either, from Futurum’s research and our analysis of the marketplace, it’s by a country mile.

Frank DeMarco: It is by a country mile. And then I’ll go one more. We bring to the table is we’re not trying to do mainframe, your mess for less. We really look to modernize your platform, make it a viable piece of your company’s business, and that’s what Kyndryl brings to the table, that value add. The automation modernization that we drive for our customers is a differentiator for us. So those are the three. How’s that?

Steven Dickens: You nailed it. You nailed it. I think that’s fantastic. Really good to see what Kyndryl are doing at the show this week. Lots of key information to take away. Thank you for joining us.

Frank DeMarco: Thanks for having me.

Steven Dickens: Thank you for joining us on this episode of Futurum Research, live from the show floor. We’ll see you next time.