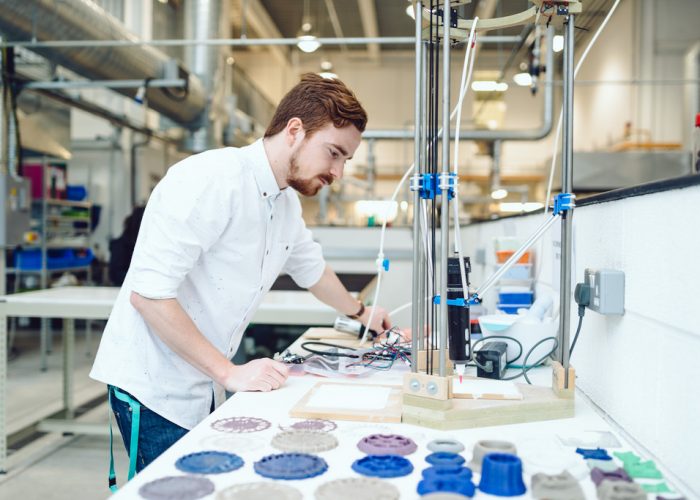 3D printing is not new—but after 30 years, the power to create prototypes and complex parts is with manufacturing giants like GE, not the agency or consumer. As David Rotman notes in his article, “The 3D Printer that Could Finally Change Manufacturing,” “…Printing metals is limited to companies with millions to spend on the equipment, facilities to power the lasers, and highly trained technicians to run it all.” What’s more, the 3D printers available for smaller companies, makers’ spaces, and the like are only capable of producing plastic parts—fine for mocking parts, but unusable as an end product except in a few cases. Now, there’s a light at the end of the tunnel for manufacturers looking to make metal prototypes and parts: Desktop Metal has created two metal 3D printing systems intended to serve engineers from the beginning to the end of the production cycle.

The founders of Desktop Metal, led by CEO and Co-Founder Ric Fulop, is made up of four MIT professors—including Emanuel Sachs, who was one of the first to file a patent for a 3D printer in 1989. With the help of over $200 million in funding from big names like BMW, GE, and Stratasys, Desktop Metal created two unique printer systems, now available for reservation through their website.

The Studio system looks a lot like what you’d see in a makers’ space: it’s described as office-friendly, safe, and cost-effective, offering the ability to print complex metal parts in-house. The Studio system uses Fused Deposition Modeling, a technique in which the printer outputs metal rods heated almost to melting, allowing each layer to affix itself to the next without the need for laser joining. After this process, the piece would go to the sintering furnace, which would bind and strengthen the layers together. Both units fit through an office door and are designed to look like traditional office equipment. The cost? You can have the printer and furnace for $120,000—much less expensive than what’s been available so far.

The Production system, on the other hand, is intended for mass production. This one won’t be on the market until 2018, but its makers promise its speed, quality, and cost per part will compete with traditional manufacturing processes. If its advertised 100 times faster output and 20 times lower cost compared to current 3D printers is true, this could really be the start of major change throughout the manufacturing industry.

As heavy hitters like HP and GE become ever more involved in 3D printing, it’s important to remember: they’re really not the ones Desktop Metal is competing against. In fact, the competition the company faces is not in another company at all, but in industry standards and well-tested metal-processing technologies used today, such as automated machining techniques and metal injection molding. “In other words,” Rotman says, “Rather than merely trying to outdo other 3-D printers, Desktop Metal will have the tough task of converting manufacturers away from production methods that are at the heart of their businesses.” The challenge is to make 3D printing the fastest and most cost-effective option.

Still, the future is on their side. When it comes to manufacturing, the bottom line is the most important thing—and if there’s a tool that can create units faster, more precisely, and with less waste, that tool will win out. “Two-thirds of manufacturers today already use some form of 3D printing” according to a United Parcel Service/Consumer Technology Association study, referenced here on Converge in “Heads Will Roll: The 3D Industrial Printing Revolution Marches On.” The same study finds parts production is the fastest-growing 3D printing application—which we’re already seeing in the auto industry, where 3D printing is utilized to create lighter and stronger parts.

What This Means for Manufacturing

Reduction of assembly time and low-waste production of highly complex geometries make 3D printing far and away the best option for some parts and pieces of certain sectors, as we see in auto assembly. Does this mean completely 3D-printed cars are in the near future? Probably not—but experts say more and more parts will be made from 3D printing in the years to come. In a report put out last year, SmarTech Publishing estimates that by 2021, the 3D printing automotive market will bring $2.3 billion in revenue.

Imagine having the ability to create a digital design, print prototypes for testing, and use what you find in that process to create the best possible version of a product digitally that would be ready for creation at the push of a button.

“It would give designers more freedom, allowing them to create and test parts and devices with complex shapes that can’t be made easily with any other production method—say, an intricate aluminum lattice or a metal object with internal cavities,” says Rotman. “Beyond that, it would redefine the economics of mass production, because the cost of printing something would be the same regardless of how many items were produced.”

With that in mind, the look of factories could completely change—becoming centers for just-in-time manufacturing rather than storehouses of products that took hours and hours to produce.

As industrial production continues to involve more automation and advanced software, 3D printing is positioned as a key player to enhance digital manufacturing—offering the ability to take away the constraints of production from designers and engineers and making complex parts lighter and stronger than ever before. Though it won’t take the place of traditional manufacturing techniques immediately, technology leaders—including Desktop Metal—are helping advance 3D printing to the forefront, showing us some of manufacturing can be done faster, cleaner, more effectively, and, finally, affordably.